A Trip Down Unsettling Memory Lane

When my roommate and I were going over the Netflix Instant Watch the other day, we knew that before the week was up, we would watch one of the two Hag Horror titles that just became available: Hush...Hush, Sweet Charlotte, which I first saw in high school and have seen twice since, and What Ever Happened to Baby Jane?, which I first saw in second or third grade and never watched again. Since neither of us had seen it in a long time, and since my sister and I had just discovered over Christmas that Bette Davis recorded a groovy single of the same title, we opted to go with Baby Jane. I hoped that I would remain entertained throughout the two-plus hours of old lady torture. I hoped it was as good as I remembered. I hoped I would be able to cry foul that it only won one Oscar (for costume). 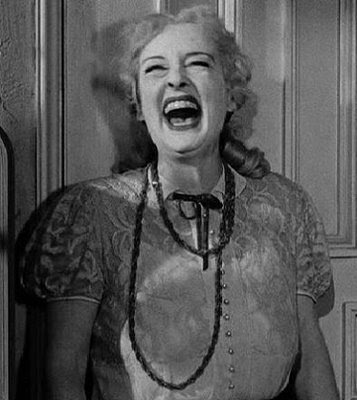 I was not disappointed. Baby Jane is just as explosive as I remembered, a campy, tragic melodramatic thriller that is impossible to look away from. The film focuses on two sisters: one a former child star, the other a former Hollywood starlet. They age together in a decaying manor, driving each other mad.

When I first saw it in third grade, I remembered feeling confused. Not that the plot lost me at all; it's pretty easy to follow. No, for me it was the realization that some characters can be complicated. At that point, I was in love with Dracula and The Wolf Man and The Phantom of the Opera, and while one can't say that these are shallow creations, they were all monsters. Baby Jane, on the other hand, had no monsters, but people. There's poor, crippled Blanche (a mostly reserved Joan Crawford), who just wants her meals to not come from the cellar; and then poor, deluded Baby Jane (Bette Davis in her greatest performance since, and including, All About Eve), whose mental illness leads her to torture her sister while planning an ill-advised comeback.

I have not seen this in a very long time, but I believe I was feeling more for Joan C who surprised me. I'm not too fond of Joan or Bette as actors though. Bette is superior but I don't love her. Off the top of my head, my favourite performance of hers is Now Voyager, I know off kilter choice, but I remember it fondly.

"Bette is superior but I don't love her."

Blasphemy! (blas for you...blas for everybody in the room...)

Sorry for the delay, but I hadn't seen Now, Voyager when you commented, so I stayed up the other night to catch it on TCM.

While I agree that it's one of Bette's most intriguing roles, I imagine most of the appeal stems from her being cast "against type" as it were. She does what she can, but I did not care for the movie. Her scenes with Gladys Cooper and Claude Rains were great, but I feel like we're never allowed to witness the character's complete arc. One moment she's insecure, the next she's completely independent. I do think Bette definitely attempts to fill in the blanks, but she's let down by plodding direction and a lame screenplay.

And Paul Henreid is dullsville.