Come on, you know this is why you're here. It's to look at the actors, those faces you've grown to know and love throughout your cinematic experiences. The year 1964 brought nominations for two veteran character actors, two previous winners, and John Gielgud.

John Gielgud in Becket
**
Appearing in only two scenes, Gielgud displays his knack for dry wit. He's the foppish French king (complete with English accent?) who refuses to dismiss his tailors when meeting with representatives of Henry's court, and he's hiding the despised Becket as the archbishop travels to Rome. It's funny and fun, but it's too slight for a nomination. Gielgud never does anything beyond be funny, and I have to imagine this is a coaster nomination...though wouldn't Donald Wolfit have been a worthier choice?

Stanley Holloway in My Fair Lady
****
Holloway gets two show-stopping numbers and a lengthy transaction scene with Henry Higgins, as Eliza's cockney chimney-sweep father Alfie Doolittle. Higgins says that Eliza is "so deliciously low", but that description is more apt for her dear ol' dad, a man fully aware of his laziness and amorality who refuses to change. He's comfortable borrowing money that will never be paid back, getting drunk and carousing with friends; Higgins calls him "the most original moralist in England". Holloway gets everything just right, his eyes half-closed in a drunken stupor throughout much of the film, comfortable whether in the streets or in Higgins' study. Holloway is just so disarmingly charming in the role, and it's not because he's trying to endear him to us; just the opposite, rather, and his comfort in the role makes Alfie that much more believable -- and hilarious. The character may be extraneous, but Holloway's performance really does command the screen. 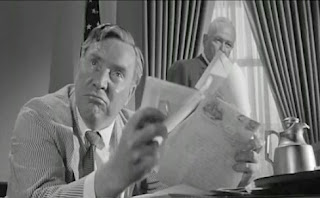 Edmond O'Brien in Seven Days in May
***
Boozy Georgia senator, best friend of the President of the United States, supports the treaty with Russia. O'Brien's Senator Clark is one of the more interesting characters in Seven Days of May, one with strong moral convictions, though not above a little boudoir blackmail; the ends justify the means, right? O'Brien looks out with his bug eyes, bellows in his stentorian voice, sweats profusely and limps along uncertainly. It's a breath of fresh air among all the hand-wringing, moralizing and speechifying to have this honorable drunk, and O'Brien plays him with the right balance of humor and seriousness. 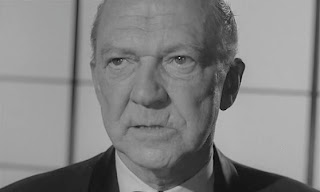 Lee Tracy in The Best Man
***
As the dying former President of the United States, Tracy is delicious. His President plays the "aw, shucks, I'm just a country hick who got lucky" card all he wants, he has no equal in that handshaking, backslapping, schmoozing manipulations of politics. Tracy heaps every bit of smarts and scoundrel to his role. You can see the strong leadership and intelligence that made him a great leader, but he's a dastardly man, too, a master of the double-cross. Tracy's tiny stature, elfin face and creaky Georgia drawl add to the surprising power of the role. A very watchable -- and rewatchable -- supporting performance. 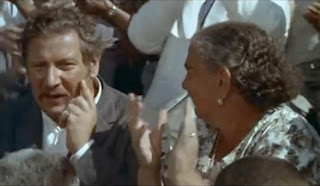 Peter Ustinov in Topkapi
****
Let's get it out of the way: he's the lead. It takes ten minutes to get to him, but afterward, the entire film is from his point of view. Now that's out of the way: wow. A deserved Oscar winner, every moment of his performance is a delight. Hilarious, slightly shy, holding his large frame close to himself, Ustinov's small-time conman is in over his head with the jewel thieves. He's inept at being oily, but it's strangely sweet to watch him try. Look also at his face when he thinks Mercouri fancies him...breaks (and wins!) your heart. 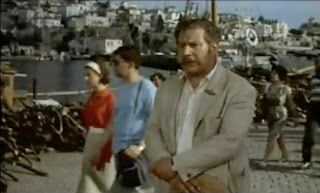 Two whole stars for Gieguld? Half a star!

Ustinov's category fraud is so random and weird. I mean, he got a Golden Globe nod for Lead Actor. So weird.

Ustinov was wonderful in this. As a category, best Supporting Actor was not very memorable in 1964. And the category has always been a catch-all...the rules for inclusion seem to change every decade (if not year). I think much has to do with agreements between agents and studios in regard to top-billing, over-the title vs, under, etc.

Andrew: What is this hate you have for Becket?! It's so GOOOOOD!!!

Both: Ustinov's categorization here *is* truly bizarre. Maximilian Schell said it was because Ustinov was "the driver", and at that time the Academy felt that driver=servant=supporting. Silly either way.