The World is Full of Singing: Original Song, 1964

Apologies for my absence. I actually planned to have posts up for every day this week, but I've been so busy with The Move. Yes, friends, after twenty-two years as a Florida resident, I have finally packed up my bags and headed west...to LOS ANGELES! Like Xtina in Burlesque, I am following my dreams and took the first bus out of town. Well, no, it was an airplane, and it was an evening flight, and I bought it a month in advance, but the feeling is the same! Now that I've figured out the gas stove, lunched at Sony, seen the Hollywood sign from the road (!!!!), and settled into my new apartment (shared with a few of my best friends), I figure I can get back on track (although how more on track could one get than to be living in Cinema Paradise?).

So, let us continue our 1964 journey with...BEST ORIGINAL SONG!


"Dear Heart" from Dear Heart
*****
A beautiful song for a beautiful film. The heroine's longing and the hero's epiphany are both wonderfully expressed in the lyrics, and those sweeping strings make it soar. Used in the film's final scene, its timed to perfection so that, like "Moon River" in Breakfast at Tiffany's, we are swept up in the music and the romance and have no defense against the tears. So lovely.

"Hush...Hush, Sweet Charlotte" from Hush...Hush, Sweet Charlotte
****
Well, I have loved this song since before I saw the movie, and I always thought it was strange that this Patti Page tune could be used for a hag horror flick, which just shows that one should never underestimate the instincts of Robert Aldrich (director) and the talent of Frank DeVol (composer). The song is played and replayed throughout the film, as a mocking nursery rhyme along the lines of Lizzie Borden; an eerie atonal ballad screeched by Bette Davis; and a triumphant, climactic sweep with some male singer. A lovely and haunting tune.

"Chim Chim Cher-ee" from Mary Poppins
****
The tune comes up frequently, brief bits here and there as jack-of-all-trades Bert brings us into a new sequence. It's really quite a fun and catchy tune. I think it's the most solid representation of what this movie is all about, more so than "Supercalifragilisticexpialidocious" or "Spoonful of Sugar" or what-what. For me, it's all about finding joy where you can in life, for though "you might think a sweep's on the bottommost rung/...In this 'ole wide world there's no 'appier bloke." Then you step in time!

Man, this movie is a lot of fun, but most of the songs have little to do with the plot...such as there is. This song is not only the exception, but is one of Sinatra's most popular tunes. It's pretty good, though it's no "Mr. Booze" or "Bang! Bang!". Still, I suppose the Academy could have done worse...

And they did! A boring song for a lifeless film. Blech.

Mary Poppins won here, and I am so down with that! Any of its songs are Oscar-worthy, really. Love of The Poppins aside, though, I have searched my heart and found that I would have voted for something else... 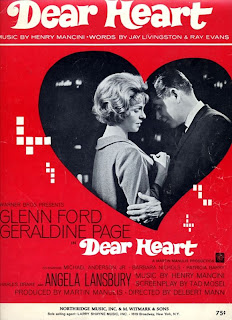 MANCINI & LIVINGSTON/EVANS for "DEAR HEART"
from
DEAR HEART
makes me cry every time
Posted by Walter L. Hollmann at 10:00 PM

Walter, you sly thing you...Los Angeles!!! Go ahead and settle in, you can invite me later! Congratulations and best of luck!!

This was a FABULOUS year for classic movie songs, one of the best...The only one I cannot recall is the one you disliked, so we can write that off.

"My Kind of Town" is almost an anthem from my growing up in the Windy City... I used to hear it all the time on the radio. Love the bluesy upbeat mood of it. Although the Union Stockyards are now closed...

"Hush Hush..." was also a huge hit and a radio standard. I agree with you on how well it was used in different ways in the film, along with being a gorgeous tune in its own right.

As a child, I loved some of the other songs better than "Chim Chim Cher-ee", but later gained much better appreciation for it....it;s mysterious, wistful, and optimistic all at once. (Although for sheer emotional power, "Feed The Birds" still reduces me to puddles.)

And "Dear Heart"... A beautiful piece...I loved your comparison to "Moon River". It, too, was a huge hi by a number of cover artists....a phenomenon we may not see again....

I cannot fault your choice... The category was an embarrassment of riches. If I had a water-pistol to my head, I might cast my vote for "Chim Cheree" on sentimental appeal alone.

I thought about you during Frankie's number! Actually, I always think, "What would Tom think about this?" when I watch a Chicago movie now. Not even exaggerating. It's like Andrew and British costume dramas, forever entwined in my mind.

But, of all the MARY POPPINS songs...Chim Chim Cheree?

I have a ridiculous love for "Feed the Birds". And if you must know, it makes me tear up every time.