All the Single Ladies: Supporting Actress, 1964

Ah, Supporting Actress! I can't believe there was once a time when other categories seemed to matter. When Stinky Lulu devoted himself to those Actresses at the Edges, it was as though the clouds had lifted and all was revealed. "Of course!" I realized. "This is the greatest category ever!" Truth: the first time I made a conscious decision to sit down and watch the Oscars, it was because of Best Supporting Actress (Smith/Mirren/Connelly/Tomei/Winslet). My five favorite actresses are Maggie Smith, Meryl Streep, Patricia Clarkson, Judi Dench and Drew Barrymore; four have been nominated for Best Supporting Actress, three of them winning. When I think back to my favorite performances of a given year, it's usually a supporting actress: Meryl Streep in 2006, Amy Adams in 2008, Mo'Nique in 2009, Valerie Perrine in 1974. Can 1964 also offer a Year's Best from this category? Is the Supporting Actress crop an improvement on Supporting Actor, or is it more of the same? Read on...

Gladys Cooper in My Fair Lady
**
Oh, she's amusing, certainly, and her unconcealed annoyance at her son, Henry Higgins, does its job well. Cooper's his equal, and you can see where he gets that witty snobbery from, though she's much warmer than he is. Still, there's not much there, is there? Does she even change expression? 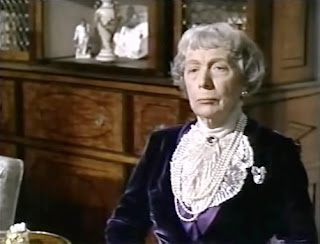 Dame Edith Evans in The Chalk Garden
*
It's not her fault she's saddled with a dull character in a dull film, but she could liven it up a little. Bonus point: she and Gladys Cooper are making the exact same face -- Grande Dame Haughtiness. 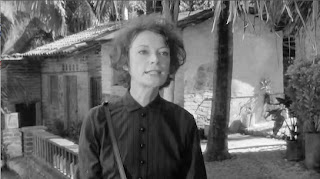 Grayson Hall in The Night of the Iguana
*****
As chaperone to a lusty Sue Lyon, Hall is the chief antagonist of Richard Burton's shamed Father Shannon, a minister given to drink and the ways of the flesh. She is also the best thing about this movie. Give her a secretly "butch" spinster to play and Hall will deliver a lonely woman fighting herself with her faith. As written, she's a harpy, but as played by Hall...I mean, my God! Her tears at the beach as she begs the beautiful nymphet to get away from Shannon. Her maternal cooing as she tries to win the girl back to her side. Her fear and confusion when Ava Gardner's Maxine calls her out on being a lonely butch. Aw, hell, just watch her in the background, look at her ever-watchful eyes as they follow Shannon and Sue Lyon (I forget her name in this, obviously) simultaneously, even if they're on opposite sides of the room. She's incredible, and the film is rarely as exciting as when she's on screen. 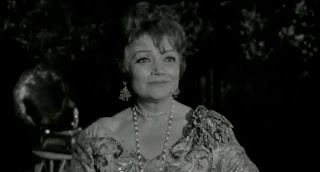 Lila Kedrova in Zorba the Greek
***
I shudder to think what others might have done with such a role, since it's a character that is so tempting to overplay: bawdy stories, silly foreigner, incurable illness, etc. Kedrova underplays so much of it while giving her character a great zest for life. She plays it with both sadness and a glimmer of hope, and breaks your heart in the meantime. 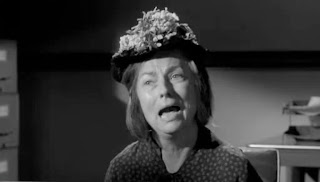 Agnes Moorehead in Hush...Hush, Sweet Charlotte
****
Moorehead surprises via the deglam approach, as the po' white trash housekeeper who mutters under her breath in her Louisiana patois, shuffling slowly, her big ass hanging in the air. Well, don't just stand there: applaud the woman, for she uses all the tricks of a broad comic without compromising the believability of the characters of the tone of the film. Her almost feral approach to the role makes Elvira a devoted dog, baring its teeth at the intruder who threatens her mistress. This truly is one of Moorehead's most accomplished performances.
-------------------------------------------------
Kedrova won the Academy Award for her role -- a role for which she learned and quickly mastered English. Awesome feat, great performance, but I give the Oscar to... 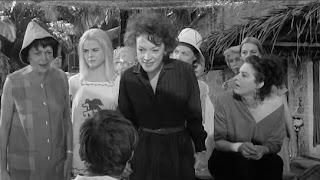 GRAYSON HALL
for
THE NIGHT OF THE IGUANA
if only it was The Night of the Chaperone!
Posted by Walter L. Hollmann at 11:18 AM

Lila Kedrova is one of my favorite winners ever! I just love her!

Grayson is fabulous no doubt,but it's a crime against humanity that none of the other actors were nominated. Hell, if Richard had gotten nominated for IGUANA he might have won that Oscar.

Fritz: This really was 3/5 flawless. If only someone like Ava Gardner or Ann Sothern or Glynis Johns had filled those other two slots...though at least '64 *can* boast a deserving (and phenomenal) winner.

Andrew: Oooh, I can't decide between his Becket and his Iguana. I think category confusion and/or split votes left Kerr and Gardner out, though MAN I would have loved to see our Ava nominated in this category, too. Nothing could have stopped the My Fair Lady juggernaut, though. I still think Hepburn would have been nominated -- and WON -- had she not been dubbed.

Count me among the FOK's..Fans of Kedrova! It is an unnerving portrayal at times, but in the end, the actress completely won me over. I think it is still one of the most unusual performances to win an acting Oscar...