Once again, the members of the Academy selected from their group of five. Alas, Becket's two-lead combo and the backlash against Dick Van Dyke's cockney accent in Mary Poppins meant that only four of the five Best Picture/Best Director/Best Adapted Screenplay nominees were represented here. Still, what a strong lineup this is, with three actors giving career-defining performances, and the other two just rocking it!

Richard Burton in Becket
****
Burton is our titular hero, and it's one of his most subdued and effective performances. He believably plays the arc from jocular kinsman to reluctant Archbishop to stubborn saint -- believably and, what's more, effectively. You just stare in wonder at the man Burton creates, a man humbled by his rise in station who chooses to do his job, even at the expense of those who put him there...even at the expense of his own feelings. Reluctant yet firm, Burton's Becket is the kind of saint I can get behind -- an all too human one. His private plea to God during his first night as Archbishop is powerful, beautiful stuff.

Rex Harrison in My Fair Lady
*****
What Harrison succeeds in bringing to Higgins is balance. It's very easy to play this role too much one way or the other, either too friendly or too snotty or too warm or too cold. Harrison presents a likable yet sometimes boorish man, completely oblivious to anyone's feelings but his own, yet also totally un-self-aware. He is honest, tactless, sporting, cruel, funny and irritating. And when Harrison gets a gleam in his eye, or smiles more warmly than usual, we see -- ever so subtly -- Higgins' fondness for Eliza, even if he has yet to realize it. Harrison's lack of singing voice is a great boon to his characterization, too, as it allows him to bring a relish to every syllable he utters. Higgins loves language, but he's in love with how it sounds coming from him.

Peter O'Toole in Becket
***
A co-lead that's borderline supporting, O'Toole plays Henry II with infectious energy and entitled cruelty. He also, quite clearly and wisely, plays him as in love with Becket. You can see it in the way O'Toole watches Burton, in the jealous glare that comes over his face when he sees his friend with women. True, sometimes that boisterous posturing and indignant shouting get to be repetitive in scenes without Burton (good Lord, I thought that final dinner was never going to end), but when the two are sharing the screen, O'Toole is on fire. 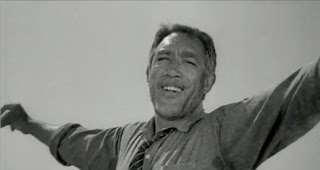 Anthony Quinn in Zorba the Greek
***
Well, Quinn definitely earned a place here. He plays his role so naturally that one almost forgets that this is a Mexican-born Hollywood star and not a Greek everyman. Zorba's selfishness and selflessness feel more consistent with Quinn than as written. His joie de vivre is deeply felt, and you can see that this is a man who has lived. Not just those scars and the stories he tells, but in his sympathetic eyes when he sees another outsider. He's been there.

Peter Sellers in Dr. Strangelove
*****
It's a difficult performance to judge, since it's three performances that take us through the tonal switches of the narrative. As Wing Commander Mandrake, RAF, Sellers plays it straight, the only one without an agenda. His logic, incredulity and horror ground the story, emphasizing the gravity of the situation. As President Merkin Muffley, Sellers is almost too straight-faced, bringing us into the more satirical element of the screenplay. His president is forgetful, worrisome, befuddled, a little childish, and almost hopeless, a nice guy who's in way over his head. As mad ex-Nazi Dr. Strangelove, Sellers goes for full-on parody, with a ridiculous accent and a hand with a mind of its own. This is the man in charge with assuring our survival, so of course Sellers goes all-out with his ridiculous characterization, an absurd character to bring us to the impossible finale. It's an ingenious structure and a one-of-a-kind performance.

Harrison won the Academy Award for reprising his Broadway role of Henry Higgins. And it's a close one for me, but in the end I must give my own Oscar vote to...

REX HARRISON
for
MY FAIR LADY
consider this my hymn to him
Posted by Walter L. Hollmann at 2:50 PM

For shame, Walter. This is so taking me back to the conversation that Jose and Luke and I had on this race. Neither of us voted for Rex, but Luke was unconvinced of the brilliance of Burton. I really don't like Rex in this. It's between the BECKET men for me.

I think I remember that convo, but since I hadn't seen Becket, I decided to reserve judgment. And now that I have, I still think Rex Harrison created something spectacular. Of course, I've been a fan of this role for years, but the heart wants what it wants...and I want Harrison as Higgins. Still, it's a ridiculously strong year for the men, so anyone could have won and we'd still be on top.

He just comes off as so slimy, and I'm sure he's not supposed so it's a case of me not being sure if I loathe the character or the acting. I liked Leslie Howard in the original version.