I originally wrote this review in August of 2010. In celebration of the film's recent release, I am reposting my review here, to get you all excited. The Myth of the American Sleepover begins playing in Los Angeles today at the Nuart Theater, and opened in New York last week at the Angelika. It's now available on VOD, I believe.

When I was 15 years old, I spent a sleepover talking with two friends until daybreak. Then one of us pulled a prank on someone else, we had breakfast, one of my friends got quite grumpy that we were depriving her of her sleep, and we eventually dropped off at, like, ten or eleven. But that night stuck with me,and as I continued to hang out with this particular group, I became fascinated by the web of relationships -- friends, crushes, exes, etc. -- that was all around me. And I thought to myself -- I swear to God, I thought this, and my friend Allie can back me up on this -- "My God, there should be an ensemble film about us, a realistic, Altman-esque look at young teens as they navigate their way through raging hormones and growing up!" I wrote several drafts of my version of what this could be, but it wound up becoming a thriller, and much more sensational than anything I'd actually experienced. But the idea of such a film intrigued me.

When I was following Cannes coverage in Spring, one title stuck out to me. One of my friends had sent me the page for it on Facebook, but I don't "Like" movies I haven't seen, you know? But you never forget a title as epic as The Myth of the American Sleepover, so I stuck with it, especially when I heard that it was the first American film to be selected for Critics' Week in five years. That, plus the good buzz I'd been reading from Indiewire and my favorite film journalist Jeff Wells, who called it "much smarter, better acted, more subtle" than the mainstream teen-oriented films. And, ok, full disclosure: writer-director David Robert Mitchell, producer Adele Romanski, associate producer Cherie Saulter, editor Julio Perez IV, cinematographer James Laxton and co-star Brett Jacobsen are all graduates of my film school.

Don't think that last part biases me in the least. Sometimes, I get a little dickish in screenings, and so when we were given the chance to see Myth Friday evening, I had a bit of a "we'll see" attitude. Congratulations to them, of course, because when a young filmmaker makes a successful, acclaimed film on his/her own terms and represents the Garnet & Gold, that's solid. It gives me hope. But I'm also not going to automatically go to bat for something just because of the FSU connection. If anything, it makes me a tougher critic, because I don't want just anyone representing my school. And so, it was with both excitement (SXSW Ensemble Winner! Cannes!) and uncertainty (low budget? amateur actors?) that I took my seat. It didn't take long for me to realize that writer-director David Robert Mitchell was granting me a wish six years in the making: this is the film I wanted when I was 15. 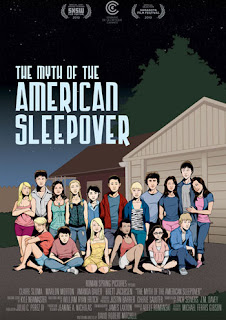 Myth has four clear leads: new girl Claudia (Amanda Bauer), hormonal Rob (Marlon Morton), heartbroken Scott (Brett Jacobsen) and soon-to-be-freshman-hoping-for-a-night-of-fun Maggie (Claire Sloma). So, yes, four characters who provide the central storylines, but this is an ensemble piece, all the way. This is a summer night preceding high school for some and college for others, which means there's a whole host of couples, crushes, besties, etc. Claudia goes to a sleepover, Rob leaves a sleepover, Scott crashes a sleepover, Maggie ditches a sleepover, Rob's sister is having a sleepover, dancers are having a sleepover, a university is having a freshman orientation/sleepover. Surely, the film's title spelled all that out for you. And Mitchell uses this innocent tradition to capture that magical moment in your life when you couldn't wait to grow up but wanted to remain young. It's universal, it's relatable, it's outstanding.

I love Sloma's Maggie, a girl who self-consciously tries to act older than she really is. She's got a confident smile and a shrug that reminded me of so many girls from middle school. Amanda Bauer believably, humorously portrays Claudia, a nice girl who can become ruthless when she feels crossed. And I love that she does do it humorously, that this film knows that no matter how seriously the youth take themselves, they are rarely serious at all. And Scott is going into his last year of college, but is going to look for these twins he liked in high school in order to treat the wounds of a bad breakup, and Brett Jacobsen has the task of making this guy, essentially a creeper, into someone relatable and likable. AND HE FUCKING DOES IT. Aided by Mitchell's sparse yet effective writing, Jacobsen makes Scott into a guy who knows he's about to do something weird, but goddamn sometimes desperate measures are necessary. And damn if I didn't see a little lot of myself in Marlon Morton's Rob, who at 14 years old is obsessed with women, knowing that Destiny awaits in the form of a hot blonde he saw at the supermarket. This kid is so deadly serious about this love and romance business, but his attention constantly wavers, depending on what girl is in the room. The fickleness of teen love!

Rob's best friend Marcus is played by Wyatt McCallum. It is my favorite performance. What this kid does with silence is wow. He's off to the side much of the time, but as a loyal friend beginning to discover himself, he gives a memorable, heart-wrenching performance. And it's all subtly done. I'll never get over his reading of, "Do you ever think...?" Hope and sadness and confusion rolled into one, and out of everyone else in the movie, he was the one I most wanted to get the kiss. A beautiful performance.

But then, it's a beautiful film. As one classmate said, it's French New Wave meets John Hughes, without any bullshit. There's no big Losing Your Virginity storyline, no Deep Moment of Tears and Reflection. Not everyone gets a triumphant ending. Hell, not everyone gets a climax. That's life. More than that, though: it's refreshing. The Myth of the American Sleepover is doing well on the festival circuit, but I can only hope and pray that it gets a release and some recognition from audiences. If ever you have a chance to see it, do so. Those of us that wish we could see something as true and real as something like, say, Nashville...that wish has come true. It's the film I dreamed about when I was 15, and I am not worthy of such a miracle.
Posted by Walter L. Hollmann at 1:08 PM

Email ThisBlogThis!Share to TwitterShare to FacebookShare to Pinterest
Labels: reviews, The Myth of the American Sleepover