On Twitter recently, I characterized the nominees of Best Original Song for 1973 as being selected by a high school prom committee. In the case of "The Way We Were", this was obviously true: I mentioned that it was the "theme" of my parents' prom. Which, come on, high schoolers of 1977. You're eighteen years old. What the hell memories could possibly be lighting the corners of your mind? Nookie behind the bleachers? Buying beer for your freshman buddies because you're eighteen, it's the 70s, and things are CAH-RAZY? Let's get real here.

Besides the Hamlisch, we've also got "Nice to Be Around", a sweet little tune about unlikely love; "Love", which is obvious; "All That Love Went to Waste", to fill that depressing-song-that-everyone-seems-to-slow-dance-to slot; and "Live and Let Die", which probably went unselected by the committee but there was that one kid who fought hard for it, dammit.

But did he fight hard enough to convince me? Let's see:


"Nice To Be Around" from Cinderella Liberty
***

Man, this song really sounds like it came from the smoky bar where first our protagonists meet. I love the simplicity of Paul Williams' lyrics, a perfect distillation of James Caan's own straight-talking, building to that section where he seems overwhelmed with emotion ("This feeling's new, it came with you"). Caan's character obviously can't believe that he's getting involved with this woman, yet at the same time he can't fight it -- he's in love. It's surprising, it's romantic, it's naïve...but it's nice. Nice to be around.

Most Bond songs, I say, deserve a nomination, but few deserve a win, if only because the lyrics are mostly nonsense. "Live and Let Die" is an awkward title to work into a song, so kudos to Paul and Linda McCartney for making some sort of sense out of it, making it a mantra for a secret agent licensed to kill. Surely, it is 007 who used to say "live and let live" until this "ever-changing world in which we're living" made him "give in and cry"...and become an MI6 operative willing to "give the other fella hell". So, props to that. Musically? Awesome. Rings in a new era of Bond, with a theme as catchy and ready for action as "Goldfinger". Most impressive? The effectiveness of its re-working mid-film as a club number from BJ Arnau.

This song is quite lovely, offering a welcome breather in the midst of the oddity that is Robin Hood. One of only three scenes in which Maid Marian and Robin actually interact, the song shortly, simply, sweetly, expresses the romance between the two. They knew each other as kids ("it seems like only yesterday..."), they're in love, bam-bam, next case.

"All That Love Went to Waste" from A Touch of Class
**

This song is...ok. But it's also kind of boring. I mean, it's appropriate for the sudden low feeling at the end of the film, when reality sets in, but for an otherwise rompy rom-com, I would have preferred maybe "She Loves Me, She Told Me Last Night" or the title tune "A Touch of Class" to represent the spirit of the flick. Maybe it's the lyrics? They're kind of dumb, I think. I admire a lot of things about this movie; obviously, it's music is not one of them.

I love this song. This isn't a case of Already In The Tank, either, since I first heard it in February's Oscarcast. But hearing it in the context of the film was superb! It first plays over the opening credits, setting up the flashback to our central couple's college day, and it totally works as one of those, "Oh, what could have been" things. Then it plays at the end after we've seen the rest of their life together, and it suddenly takes on new meaning!

Oscar gave it to Marvin Hamlisch and the Bergmans for "The Way We Were". I'm torn, personally. I love "The Way We Were", but I've also known "Live and Let Die" for far longer -- and also really adore it. As far as the perfect union between song and film, though...forgive me, Bond fans. I award my vote to: 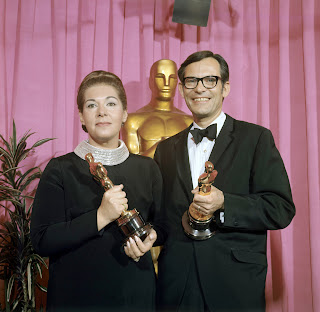 MARVIN HAMLISCH, MUSIC
ALAN AND MARILYN BERGMAN, LYRICS
for
THE WAY WE WERE
Somewhere in LA, my friend Caleb is shaking his head, disappointed.

Email ThisBlogThis!Share to TwitterShare to FacebookShare to Pinterest
Labels: 1973, A Touch of Class, Cinderella Liberty, Live and Let Die, Oscars, Robin Hood, The Way We Were