Adapted Score has not been awarded since the 80s, though it still remains an official category -- just tweaked a little.

The Adaptation Score Oscar allowed for different definitions of what was adapted and what was original. Mary Poppins, for example, was nominated in both Score categories: Original for the Sherman Brothers original compositions, and Adapted for Irwin Kostal's arrangement of same. Probably it was this foggy difference that led to the category being rechristened Score of a Musical Picture - Original or Adapted, but that of course led to a loose definition of what a musical is. Then it became Song Score, then the more honest Song Score and Adaptation.

Today, the category is known as Original Musical, and a qualifying film must have five original songs that further the narrative. Even then, it can "be activated only by special request of the Music Branch Executive Committee to the Board of Governors". There's been a dearth of original musicals, of course, but I wonder if this sub-category would be activated even there weren't anymore?

I say they need to relax those rules, returning to the Adaptation and Song Score of old. This probably would have relaxed everyone in 2010, when we were up in arms about the eligibility of Black Swan (adapted from Tchaikovsky) and True Grit (adapted from traditional hymns). These two, plus Tangled, would have competed, it would have been a great mixture of fun and weird, and Clint Mansell would have an Oscar.

1973 was mostly about the Kostal approach, though, with two of the nominees dependent on the orchestrations for a musical: Jesus Christ Superstar and Tom Sawyer. The standout of the three looked be The Sting, the awards magnet that saw Marvin Hamlisch adapting ragtime tunes by Scott Joplin. Let's take a look, shall we:

Hard to tell where Lloyd Weber ends and Previn begins, it being a completely sung-through production. I do know that this is the most effective arrangement of the "Crucifixion" sequence, and the entire "Simon Zealotes" number is inspired. I try to live my life to that score.

Marvin Hamlisch adapting the music of Scott Joplin for The Sting
*****

A lighthearted choice that really sells the tone of the film. This a movie about con artists, and they're fun, sexy and awesome. The ragtime reassures us that this isn't going to be a bummer, and works well in chase scenes and title sequences alike.

Williams is at a disadvantage, as the entire repertoire of songs here sounds like just the same one, repeated ad nauseum. He finds some fun things to do with "Hannibal, MO", and takes advantage of the beauty of "The River Song", so at least he found something to work with. It's to his credit that a Copland-esque Americana is evoked.

The choice is as obvious for me as it was for Oscar, and we both give it to: 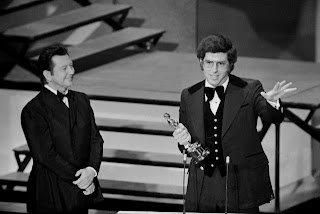 MARVIN HAMLISCH
for
THE STING

This gave Hamlisch the distinction of winning all three awards he was nominated for in one night. Congratulations!