Two Uniforms, a Con Man, and a Pair of Middle-Aged Sadsacks: Actor, 1973

The five men nominated for Best Performance by an Actor in a Leading Role all walked away with an Oscar -- in different years, of course, and some in different categories. Only for Jack Lemmon was it this year, this category. 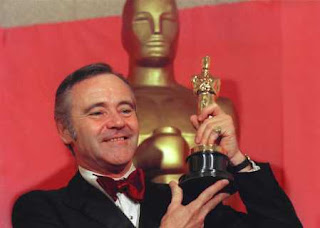 Lemmon previously had a Supporting Actor Oscar for Mr. Roberts, in which he played Ensign Pulver. Marlon Brando had previously won the year before for The Godfather, and in 1954 for On the Waterfront. Al Pacino was fresh off his first nomination for Supporting Actor (!) in The Godfather, and there'd be many more nominations before he won in 1992 for Scent of a Woman. Jack Nicholson was just two years away from his first win, in 1975's One Flew Over the Cuckoo's Nest; he also has trophies for As Good As It Gets, and as a Supporting Actor in Terms of Endearment. Robert Redford was never again nominated for an acting award, but his Best Director trophy for Ordinary People probably keeps him warm.

It was a passing of the torch, though Hollywood was still wary of these new kids -- remember the winners of this category for '72, '73 and '74 were all members of the old Hollywood establishment. Not that that's completely fair: Jack Lemmon's win could be seen as a sentimental, "one for the old guys!" one, but that would ignore the strength of his performance, and it is one of his best. Indeed, it's a shining year for all involved, as you can see: 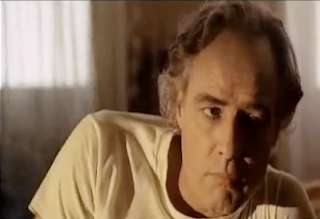 This performance is so bizarre. And magnetic. Brando's American widower turns from soulful to wrathful quite quickly sometimes, and he's rather cruel to those he professes to love -- but does he really love them, or is he just delusional within the downward spiral? It's a very complicated, at times uneven turn, but I wouldn't give up that childhood monologue, "pig-fuck" exchange, deathbed scene or final tango. All raw, surprising scenes that stick with you. 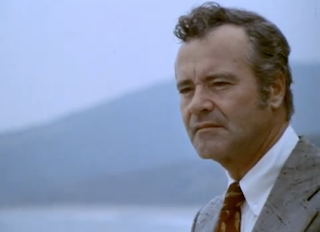 It can't be stressed enough that Lemmon's execution of those bizarre baseball stats is a miracle -- he makes them make sense within the context of this guy, Harry Seaborn, the kind of shady businessman who actually exists. By which I mean, despite the bribes, fraud, whoring, drinking, lying, arson attempts and other criminal activity, Harry genuinely seems like an average guy just trying to keep the structure around him from collapsing. He assuages his guilt by convincing himself it's for the greater good, in some way, but Lemmon shows us that Harry isn't so sure what the Greater Good is anymore. What did he fight for? What did his war buddies die for? What's it all about, Alfie? Lemmon overcomes some of the script's shortcomings to give a performance for the ages. 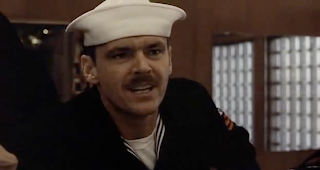 Jack Nicholson in The Last Detail
*****

Early Jack is so good! It's a firecracker of a performance, one that sees the counterculture hero in the Navy, of all things. As "Badass" Buddusky, Nicholson -- dare I say it? -- has never been better. There's a control to this performance, as the Navy lifer seethes rather than explodes; when he does burst, it's frustrated and exhausted, far removed from the kind of showboating that Jack is often accused of. He's just a guy, you know? He's powerless: he doesn't like what he's doing, but what else is he gonna do? Badass's kindness and rage exist comfortably together in this performance. And, it must be said, "I am the motherfucking Shore Patrol, motherfucker" is beautifully delivered. 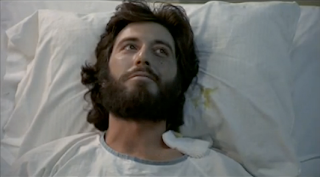 Pacino is a good fit for the odd Frank Serpico, with his diminutive stature and...Pacino-ness. Considering they shot the film in reverse chronological order, the smooth journey from mild-mannered good cop to paranoid, explosive good cop is remarkably executed. Winningly weird. 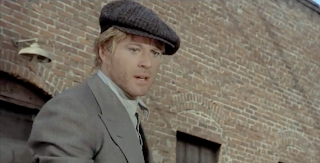 Robert Redford in The Sting
***

Look, Redford's not a great actor. Most of his roles consist of him smirking, chewing gum (Jesus, how he chews gum!), and delivering lines in a semi-parochial, almost recitative manner. But The Sting allows him to vary expression, physicality, and intonation, going from a kind of boyishly "fun" confidence artist to the vengeful con man on a mission.

The Oscar went to Jack Lemmon, a deserved reward for a man who took a pay cut for a project he believed in. Boy, if I had my way, I'd pull an Ingrid Bergman here and now and announce, "It's...a tie!" But then my ballot would be thrown out, so I might as well choose. And I choose: 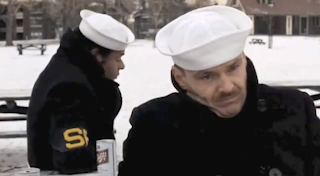 JACK NICHOLSON
in
THE LAST DETAIL

I know, I know. I passed over Chinatown in favor of Dustin Hoffman in Lenny; I ignored One Flew Over the Cuckoo's Nest so's I could embrace Al Pacino in Dog Day Afternoon. But guys, The Last Detail!