Music...Lights the Corners of My Mind: Original Score, 1973

We begin our journey back to 1973 with the Original Score category. 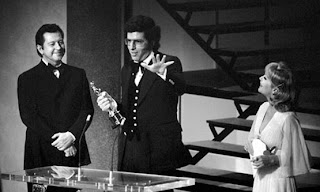 This category's always been known for showcasing more than just the Best Picture nominees, giving a tip of the hat to crowd-pleasers, blockbusters and genre efforts. This past year saw nominations in this category for three Best Pic nominees (Argo, Life of Pi, Lincoln), an ambitious costume drama (Anna Karenina) and a Bond film (Skyfall). The year 1973 saw nominations for a sci-fi drama, two rom-coms and two star vehicles, one of which is also a rom, with some com.

But if this is the category that goes for unique film titles, it's also the category that nominates the same damn people every time. Even this early, you'll see a John Williams nod. Jerry Goldsmith is a fixture by now, on his sixth nomination. Georges Delerue was here before; he'll be back again. Marvin Hamlisch is new to this group, but it's just the beginning of a long relationship with Oscar. And John Cameron is a one-and-done.

One thing I noticed was that the scores this year tended towards the less boisterous. You barely notice them, there's a lack of theme, etc. Perhaps that explains the eclectic mix here, as many of these films actually went for it. Overall, it's a pretty good mix.

I know some may find this blasphemous, but as much as I adore Spielberg-era John Williams (1974 - present; also includes Lucas), his pre-Steven period is a real joy. Chameleonic adaptations of musicals (Fiddler on the Roof; Goodbye, Mr. Chips!); bombastically kitschy actioners (The Towering Inferno, Earthquake); soapy melodramatics (Valley of the Dolls); Williams has a hell of a range that we often forget amidst all his theme-writing from the past thirty years. How easily a score like Cinderella Liberty can slip through the cracks!

Cinderella Liberty's score isn't exactly modest, but it also fits the milieu so well that it doesn't get distracting. It teems with the soulful sweat of jazz, the perfect aural backdrop to a tale of a Navy man and a whore and their unlikely relationship. Jazz, of course, is more than just the music of the streets, but the sound of improvisation, and Lord knows this couple is playing everything by ear. You may not be humming it on your way out, but at least you aren't rolling your eyes, either.

The Day of the Dolphin, composed by Georges Delerue
*****

Has anybody else noticed the similarities between some of the music in The Day of the Dolphin and Cocoon? Is it just me imagining things? It's not like they're exact copies, but the progression of their themes, some of the instruments, and the elegiac tone within a not-too-shy score, plus the fact that both films deal with aquatic abnormalities, did give me pause while watching the film. Naturally, one should assume that because the score distracted, points will be subtracted, since a film's music should only enhance the work.

Here's the thing: (1) I love the Cocoon music, and it seemed unfair to dock points for a similar score that's twelve years older; (2) I really, really loved The Day of the Dolphin, so obviously the music was not a problem. Indeed, the scenes incorporating the score seemed to grab me the hardest, from George C. Scott's balletic swim with Pha to the emotional final scene. Out of all the scores here, it's the only one that I've been revisiting more than once. Sure, it may be the same over and over, but when something works this well, you gotta give it its due.

Now's a good time to bring up Georges Delerue, by the way, who seems to specialize in unvarying yet beautiful film scores, be they meta comedies (Day for Night), weirdo religious dramas (Agnes of God) or talking-dolphin anomalies (this one). Maybe the film works as well as it does due to his emotional score; if so, then that means he's done his job. He's found the emotional center of the movie and put it to music. And I love him so much for it.

At first I didn't think the score would bother me, since it first turned up at the twenty-minute mark, and very briefly at that. And that's fine. It's modest, unassuming, plays well alongside the otherwise scoreless flick. Then the final hour consists of a booming, insistent score, with a theme and everything, over mostly dialogue-less passages. It's a shock, and for every segment where it works (hello, Indian tribe sequence!), there are several where it's just distracting (hello, escape sequence!). It's too epic, too genre for the movie we've already gotten to know, so that it becomes a distraction.

The music itself is good, though. Could work as its own symphony.

A Touch of Class, composed by John Cameron
**

John Cameron was quite prolific in 1973, having also composed the scores for horror flicks Night Watch and Psychomania, as well as cult western Charley One-Eye. A Touch of Class is not as big as some of those scores, but nor does it really reach for anything more than serviceable. Modesty is one thing, but I can't understand nominating a near-invisible score in a year that boasted Riz Ortolani (Goodbye, Uncle Tom AND Brother Sun, Sister Moon), James William Guercio (Electra Glide in Blue), and Lalo Schifrin (Enter the Dragon).

Cameron's score borrows themes from the original songs written for the film, but he only wrote one of them, so even then his category placement seems a sham. His work doesn't take away from the delightful experience that is A Touch Of Class, but neither does it add anything.

The Way We Were, composed by Marvin Hamlisch
****

Marvin Hamlisch made history when he won all three music awards in one night. First up was his score for The Way We Were, the film that began the beautiful partnership between him and Barbra, and which served as my parents' prom theme (they still have the champagne goblet with THE WAY WE WERE etched in purple New York Times font; the year was 1977). The song itself, we can cover later -- as in tomorrow -- but what of the score? What justifies Hamlisch's win here?

Well, really, it does seem to be about two hours of the same music over and over again, albeit arranged differently to suit the mood of a particular scene. I do remember a strange "Brady Bunch" trill of woodwinds when Barbra rushed to the class where Robert Redford's paper was read aloud. So that was different. Otherwise, a lot of "memories...light the corners of my mind".

Pretty catchy, though. Maybe I'm an easy sap for stuff like this, but eh, who cares?

Oscar went all in for Hamlisch this year, and for good reason! I, on the other hand, admire the work but give the trophy to an equally-deserving, beautiful work. My Oscar vote goes to... 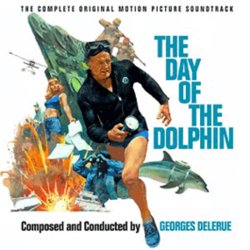 GEORGES DELERUE
for
THE DAY OF THE DOLPHIN
﻿
And so begins another Oscar flashback....

Email ThisBlogThis!Share to TwitterShare to FacebookShare to Pinterest
Labels: 1973, A Touch of Class, Cinderella Liberty, Georges Delerue, Jerry Goldsmith, John Cameron, John Williams, Marvin Hamlisch, Oscars, Papillon, The Day of the Dolphin, The Way We Were