I find this to be one of the hardest categories to adjudicate. Since we're talking previously-published works, there's reasonable doubt as to what belongs to the original author, and what belongs to the adaptor. I'm familiar with none of these books, so I have no inkling of the writers' fidelity to their source materials. How much is their own dialogue? What plot twists did they invent? What was thrown out to accommodate the world of cinema?


Silly questions, in the end. It doesn't matter how close it is to the original; what matters is, does this work? Whether it's adapted or original, a screenplay should convey character and narrative neatly and effectively, and hopefully provide one or two lines of dialogue you want to incorporate into your daily life (not that dialogue's the end-all, be-all...). A great adaptation will either make you want to read the book after the movie, or else forget that such a book exists. A not-so-great adaptation makes you wonder, "Wait, was this something kept from the book?" during the movie, which is distracting and helps no one.

The year 1973 offers a plethora of great writing, though. Two of these are perfect; one is near-perfect; one is quite good; and one is just there. I have tried to separate the script from the final product as much as possible, but truthfully, if I didn't like the movie, I'm probably going to try to take out everyone involved with it.

William Peter Blatty for The Exorcist, from his novel
*****

Thoroughly develops both its characters and scares. Even as the events become more and more surreal, Chris and Karras maintain their humanity, and all arguments about science vs. God or belief in the Devil do without any preachifying or Big Statements. A discreet, disquieting narrative.

Robert Towne for The Last Detail, from the novel by Darryl Ponicsan
*****

Superb characterizations, dialogue that reads more like a transcript of the real thing, and a narrative that doesn't outstay its welcome despite its meandering. This last thing is especially impressive, considering the film experiences a come-down as our heroes reach their destination. Decent use of the phrase "I am the fucking shore patrol, motherfucker!"

James Bridges for The Paper Chase, from the novel by John Jay Osborn, Jr.
**

A few good lines, but overall whiny, somewhat tedious. If I'm supposed to care what happens to the protagonist, they're doing it wrong. He's obnoxious.

A gas. The con scenes have a believable patter, there's a nice rhythm throughout, and I feel like I have a hold of these character arcs. The span of time is a little muddled, and I ain't too sure about that ending -- it doesn't sit right with me, for some reason. Maybe because I liked the open-ended one of the minute before? Pretty swell overall, though.

Waldo Salt and Norman Wexler for Serpico, from the book by Peter Maas
****

Riveting and suspenseful, even if names get a bit confusing. The important ones are made clear, thank goodness. A clear chronology gets us through; distinct characters from the titular hero to one-scene wonders are a plus. Don't know if the women were all that necessary, though. Seemed almost superfluous, even if they exist to develop the whole obsession-at-the-expense-of-self-and-others thing.

No surprise that the only Best Picture nominee in this category took home the gold. And what do ya know? -- Oscar's choice matches my own! The Oscar and my vote go to: 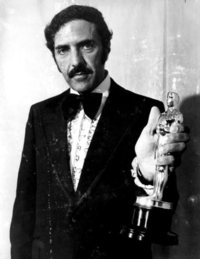 WILLIAM PETER BLATTY
for
THE EXORCIST

It's nice when great horror gets its due.