Usually, Best Supporting Actor is a playground for overdue veterans, previously-nominated favorites, and perpetrators of category fraud. Like 1975, though, 1993 is a great example of actoring at the edges, with two transcendent perfs, two sublime ones, and one that's pretty damn great.


One barely misses the work from Ben Kingsley (Schindler's List, Searching for Bobby Fischer), James Fox (The Remains of the Day), Sihung Lung (The Wedding Banquet),  Gene Hackman (The Firm), or Other Tommy Lee Jones (Heaven and Earth). And while we may or may not agree with this year's champion, you at least should be able to applaud the novelty of an Oscar going to a summer action remake of an early-60s television series. We also get two Unstoppable Villains, a Loving Father, and a Disability, so players of Oscar Bingo can be satisfied, as well. All of the sweet spots, and it's a quality lineup? A vintage roster, indeed! 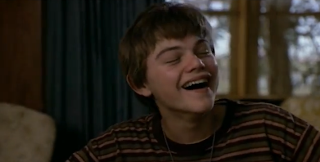 Leonardo DiCaprio, What's Eating Gilbert Grape?
****
I know Glenn just tweeted about how meaningless using the word "unrecognizable" is, but: Leo is unrecognizable in this role! And I think one should point out that he is such without using makeup. It's the way he contorts his arms, flicks his nose, laughs loudly and horsily. It's the way you him slowly processing each scene. It's the fact that we just saw him in This Boy's Life, and I'll be damned if you can find a single link between the two performances. Uncanny. 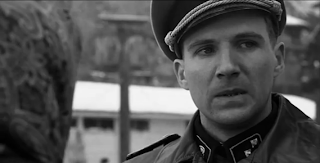 Ralph Fiennes, Schindler's List
****
Spielberg said he wanted "an evil sexuality" for this role, and boy did he get it. I think that single combination of words completely informs Fiennes' performance, as he has to believably portray a sadist who can also lust after a Jew who can also blindly tow the party line who can also be a great drinking buddy. You wouldn't think given his brutality that he'd be so acquiescent to some of Schindler's requests, but while he's unquestionably evil, Fiennes adds enough lust, charm, and vulnerability to suggest one of just many, a lost generation brainwashed by pride. 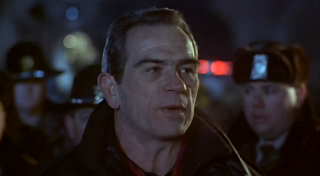 Tommy Lee Jones, The Fugitive
***
Jones perhaps lays thick the humor, but not so much as to become irritating. Convincingly dogged, though I must admit I have a problem with the line "I don't care." I really do believe the originally-written, "That's not my problem" is truer to the character, because the Marshal is all about justice. This line change was an idea implemented by Jones, so it's an acting choice, and one that, I feel, works against how he plays it otherwise. Still, great fun.

John Malkovich, In the Line of Fire
*****
But if Jones is fun, Malkovich is a blast, a magnetic presence that also terrifies. Despite rarely sharing the screen, he and Clint have an obvious chemistry that makes each exchange a genuine, toe-to-toe battle between parties of equal strength. Menacing and, if you've ever read a message board, skin-crawlingly authentic. 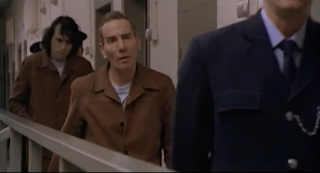 Pete Postlethwaite, In the Name of the Father
*****
Postlethwaite gives so much by holding back. His humble Giuseppe really is an uncomplicated man, I think, one for whom there is no such thing as ambiguity. Which is why his faith is so strong, why it becomes something he clings to when his son gives up hope. It's a quiet and lovely performance of a man who may neither understand nor trust his son, but still loves him -- so much so that he's going to share a cell with him.

Jones won for The Fugitive. So of course he's the weakest competitor in the field, not through lack of skill obviously, but because of a stacked deck. Out of that deck, my Ace to play is: 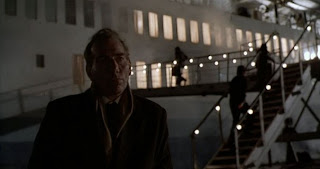 PETE POSTLETHWAITE
for
IN THE NAME OF THE FATHER
please don't kill my da!
Oscar returns to its embrace of Schindler's List -- and I find myself with another Sophie's Choice! Tomorrow we cover Best Director, starring Robert Altman (Short Cuts), Jane Campion (The Piano), James Ivory (The Remains of the Day), Jim Sheridan (In the Name of the Father), and Steven Spielberg (Schindler's List).﻿

I don't like The Fugitive much. And it I like it even less because it ruins for me a near perfect supporting actor lineup and a near perfect Picture lineup. Not a bad movie by a mile, but in both cases pales in comparison to the competition. This is a case of being being uncertain about my favourite between Leo, Ralph, Pete I ALWAYS keep scratching my head because they're all so fantastic. And the fact that neither has come closer to winning an Oscar (same for John) makes me that less enthused with Tommy.

This is truly an outstanding year for this category. Even if I would put Tommy Lee Jones last, he is still pretty great. Like Andrews, I never know how to pick...