Why 1961? A few reasons: With all the talk of Steven Spielberg's West Side Story remake, I wanted to revisit the original. There were a number of classics I needed to catch up with, such as Judgment at Nuremberg and The Hustler. And it marked the release of Road to Eternity, the second chapter of Masaki Kobayashi's The Human Condition, so, you know, why not?

We start with the nominees for Best Supporting Actor, after the jump... 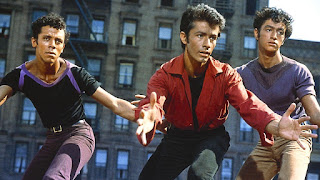 He gives you the leader, the lover, the brother, the fighter, raw masculinity through lithe choreography. The confusion on his face at the rumble, when their teen hoodlum antics draw real blood and consequences...oh, it's heartbreaking. Fresh no matter how many viewings. 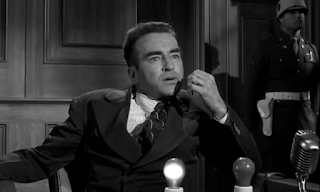 Clift's exhausting performance gets across the shame felt by this victim of sterilization, testifying in fits and starts - it's painful to watch, effective.

Walks off with the movie, a perfectly-calibrated comedic performance fitting perfectly into the sweet, screwball antics of the story without entirely sanding the gangster edges. We feel his absence whenever he's not on screen. 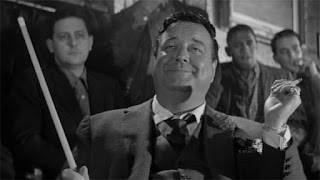 Barely a word said - really, more a glorified cameo - but a presence. Light on his feet, elegant with a pool cue, and all the time with set, tired eyes, Gleason gives you the man's full resume just through his comportment. 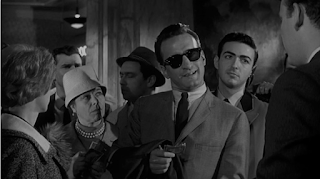 "You owe me MONEY!" His greatest accomplishment is capturing the clash between the practiced sophistication and the grasping desperation of the professional gambler - Gordon's a grubby little man who happens to wear a suit. Scott knows who the real loser is.

The Academy gave the award to George Chakiris - it was only the fourth award of the night, following the Documentary categories and Costume Design, but already West Side Story's second Oscar:


And you know what? I'm inclined to agree. My vote goes to: 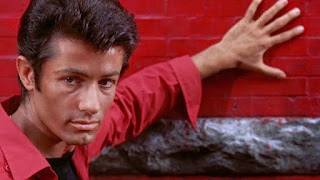 GEORGE CHAKIRIS
for
WEST SIDE STORY

Tomorrow, an international affair with the nominees for Best Original Screenplay: Russia's Ballad of a Soldier, Italy's La Dolce Vita and General della Rovere, and the USA's Lover Come Back and Splendor in the Grass.

Quite surprised. :) I love WSS to death but I always considered Chakiris's win a big WTF...glad to see someone who supports this win though.