Next week, we'll delve fully into the Best Picture nominees. But while we have the weekend, let's take a closer look at some of the films discussed earlier this week that weren't up for Best Picture... 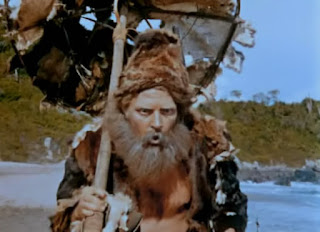 My only exposure to this story was a comic adaptation (I think Classics Illustrated) I read in either fourth or fifth grade. I barely remembered any of it except that Crusoe's deserted on an island and then Friday eventually appears and is more or less adopted, so I was prepared for some problematic times. But wow, I was not ready for such a beautifully-shot satire about stubborn imperialism and white supremacy, in which a spoiled idiot almost dies, spends thirty years trying to recreate a parody of western society, before realizing there are other, non-white people on "his" island. It's hilarious. 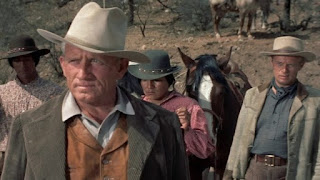 That Oscar win is bizarre, considering the history behind the screenplay: Phillip Yordan adapted the novel I'll Never Go There Anymore into the 1949 film noir House of Strangers. He was completely unaffiliated with the production of Broken Lance, but his screenplay for the earlier film was used as the basis for screenwriter Richard Murphy's western spin on the tale. The film itself? Terrific, anchored by the reliable Spencer Tracy as a ranch owner who has built up land and sons in equal volume - and is very vocal about his favorites. 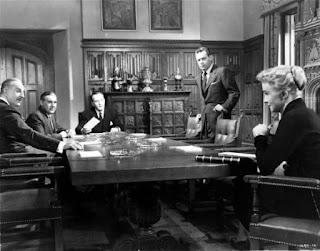 My cup of tea, an ensemble drama (though mostly focused on William Holden and, to a slightly lesser extent, Fredric March) about businessmen jockeying for the top spot in a corporation when the big boss suddenly dies. I love a movie predominately made up of people in suits, sitting at desks, loudly moralizing or quietly shivving each other while the viewer is left to ponder The Way Things Are Now. There is a Little League game to break up the tension (boo!) - and a bonus bitter Barbara Stanwyck! The movie that truly has it all!

Disaster movies are always a great time: the all-star cast of veterans and newbies sailing in for a showcase scene (and/or splendid death!) in between VFX-heavy setpieces; they're like The Big Broadcast movies but with killer bees instead of jokes. If you're not going to be good, like Earthquake, be bonkers, like The Swarm. Perhaps we should give The High and the Mighty a pass for being an early progenitor of the genre, pre-dating Airport by 16 years. But we won't, because it's trash: boring, hideous to look at, pulling every potential punch. Only the score nomination makes any sense; perhaps Tiomkin's ear-worm theme made people think they had seen a masterpiece. 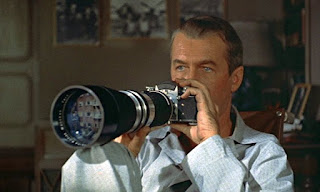 Is this what perfection looks like? A claustrophobic thriller that puts the hero in the role of the audience, thus allowing a double-voyeur experience as we helplessly watch him helplessly watch others, and indicting us all - us gossips, us spies - as ghouls thirsting for sex and violence. Indeed, sex is all over this film: Miss Torso and Miss Lonelyhearts, opposite sides of a seemingly similar coin; the newlyweds, extremely active, day or night; the supposed motive behind the maybe-crime that our hero could have heard; and of course, Jeff and Lisa, with all the comforts and quarrels of intimacy yet locked in the long battle of commitment. Careful, Tom, indeed. 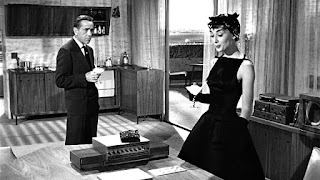 A seemingly frothy, class-conscious rom-com between the haves and their servants. They share the same property, even the same (moral) values, yet to mix the two is unthinkable - the working-class are either employees, outlets for sexual appetite, or pawns in a capitalist game. And all it takes to cross class lines is...love? That'd be nice, yes, but a makeover certainly helps. So, yeah, there's lots of "serious" elements to consider when it comes to Sabrina. If you don't care to, there's also the story of an earnest young woman who shapes her destiny and opens a cold man's heart. Such a delight!

This is the version of A Star is Born, the story of a movie star doing himself in while nurturing, and eventually observing, the rise of his wife. Yet the film, does not make this a story of jealousy, at least not obviously so, but a tale of a broken man blocked by self-pity, and a woman who, though she goes by her married name at tale's end (not a big spoiler, unless you've never seen a version of this film), is just as much Her Own Person as she is in love with this man. A complex tale of relationships and show business with incredible songs? Is masterpiece too strong a word here? 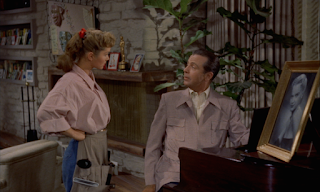 Risible shenanigans occasionally interrupted by refreshing Glenda Farrell...though her character's enabling, nay encouragement, of the central storyline is...whew! Based on a play, it's about a 35-year-old screenwriter who's friendly with the cops. So the cops have him babysit a 17-year-old street urchin on Christmas Eve. Because otherwise they'd have to throw her in jail for vagrancy and he's looking for inspiration for a new screenplay... Anyway, it's a rom-com. It's gross. 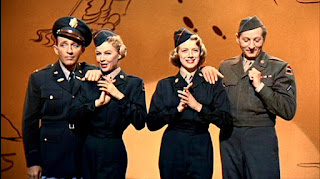 Not just the song, but I'm pretty sure the same sets from 1942's Holiday Inn are re-used for this musical that's got it all: a sister act, the war, veteran appreciation, even an ode to minstrel shows without blackface! The definition of feel-good, with dynamite musical numbers (look for the gorgeous George Chakiris as a dancer) and a finale that'll have you crying 'til you're standing in a puddle.
***KEEP EVERYTHING BELOW THIS MESSAGE AT THE BOTTOM OF EACH POST - DELETE MESSAGE BEFORE POSTING**