The 1954 Academy Awards gave nominations to several stone-cold classics: On the Waterfront, Sabrina, Rear Window, 20,000 Leagues Under the Sea, A Star is Born, Seven Brides for Seven Brothers. As usual, the Best Picture lineup does not 100 percent reflect that, though The Caine Mutiny is, I suppose arguable (just because I don't like it doesn't mean it's not a classic).

So, what do we have? The Caine Mutiny, in which a Navy crew rebels against their captain after he shows clear signs of mental instability. The Country Girl, in which a hot-shot Broadway director hires a washed-up alcoholic actor for a show, only to lock horns with, and inexplicably fall for, exhausted wife. On the waterfront, in which an ex-boxer working the  waterfront must choose between naming names of corrupt union bosses...or keeping quiet and allowing innocent men to die. Seven Brides for Seven Brothers, a musical about wild mountain men getting tamed by their brother's wife. And Three Coins in the Fountain, about romance for three American women living in Rome.

For the Academy, and many others, was clear:


The Caine Mutiny
produced by Stanley Kramer
**
second of six nominations in this category; BAFTA Award nominee for Best Film

Phony throughout, from the ill-judged score by Max Steiner to the irrelevant romantic subplot, from the mostly surface-level performances to the plodding pace. And then there's the sudden shoehorning in of a finger-wagging speech about the courage of unstable men in uniform. The saving grace is the climactic court-martial - rightfully the showcase in later adaptations - but it's an awfully bland journey leading up to it.

Oddly disappointing, not because it's terrible, but because it's such a mish-mash of true notes and false ones, often within the same scene. Its exploration of the compulsions and manipulations of an addict are terrific, but the film's focus instead on the titular long-suffering wife feels misplaced, especially since it doesn't really know what to do with her. Inconsistent.

Beloved as a classic, hailed as a masterpiece of the little man vs. big bully variety, looked askance on as an apologia for HUAC friendly testimony. Difficult to avoid that last element, but! It's a great movie, well-made, and yes, the exploitation of the working-class under the guise of "solidarity", of minding your business and not being a "stoolie", is a forever problem! So kudos to the filmmakers for taking it on, and doing so in such powerful, raw, not at all exploitative fashion. I love it.

Magical chemistry shared amongst the cast, jaw-dropping choreography (dance and fight both), cheeky songwriting, and a family-friendly innocence maintained despite the uncontrollable horniness of its plot. So many places where it could have gone wrong, or at least look problematic by today's standards, but it manages to kidnap its women and upend the patriarchy, walking that tightrope as nimbly as Russ Tamblyn would. A genuinely thrilling achievement.

Three Coins in the Fountain
produced by Sol C. Siegel
**
first and only nomination

A fun romantic-comedy whose presence here I cannot begin to fathom. Each storyline is pleasant enough, but they're presented so episodically that it undercuts the impact of the ending. Still, the scenery is beautiful and it's well-acted enough. A diversion, but hardly among the Best Pictures of the year. Not enough Jean Peters. And honestly, in thirteen years doing this blog, it's the only Best Picture nominee I keep having to look up.

Of the ten categories we've done so far, Rear Window has won twice (Director, Screenplay), On the Waterfront has won thrice (Supporting Actor, Story & Screenplay, Score), A Star is Born has won thrice (Actor, Actress, Song), Executive Suite has won once (Supporting Actress), and Seven Brides for Seven Brothers has won once (Musical Score). Of these, only On the Waterfront and Seven Brides for Seven Brothers are Best Picture nominees. Both received five stars from me. But in the end, only one can get my vote. And the Best Picture - of Oscars' lineup - is..... 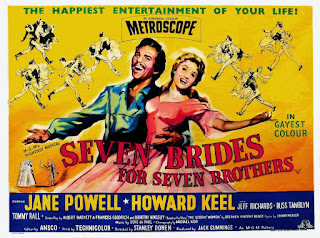 Making this a year where I agreed with Oscar only once!

Stick around throughout the month, though, because the Retro Hollmann Awards are coming, along with my Top Ten and more capsule reviews of the films of 1954!