"Hold the whipped cream; I just had dessert" 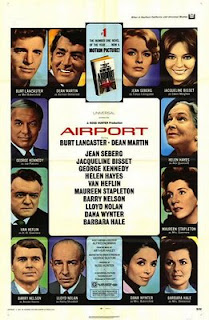 Did y'all read Tom's fascinating retrospective on the 1970 Oscars? Go there now, and you will find welcome reminders of great films honored (MASH) or given short shrift (The Landlord), thoughtful reflections on the significance of the nominees,  performance analyses that provide context, and much more. For some of you, it may provide a view/opinion on a film different from your own. If you're like me, though, you'll find a list of films that you've been meaning to see and never have, and since you don't want to be left out of the conversation...

The one movie I knew I had to get a hold of was Airport. I'd heard so much about the movie, the franchise, the Disaster Movie Craze it influenced. Something -- maybe Tom's write-up of the supporting actress nominees? -- something told me that now was the time.

Yet I knew I couldn't just watch Airport. This was an ensemble film based upon a novel -- a novel which I happened to have a copy of, a first edition paperback purchased on a whim from a used bookstore, still unread. What's more, the only actors that I knew were in it were Helen Hayes, Maureen Stapleton, Van Heflin and Dean Martin. I rarely get to a read a book without having actors already in mind. This was going to be a treat, coming up with my own point of view of how they should be cast; that cast will be coming next week for Casting Coup Month. 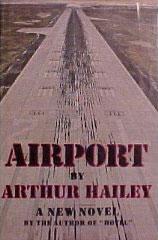 The book was a hell of a read, reminding me in its style and execution of a John D. MacDonald novel. He, too, wrote ensemble pieces built around a specific location or disaster, impending or otherwise. MacDonald is one of my favorite authors, too, so this comparison is high praise. Arthur Hailey is not concerned with good guys and bad guys -- well, except maybe for his depiction of a crooked lawyer left out of the film -- but with regular people, warts and all. Mel Bakersfeld is a hell of an airport general manager, but can't manage his own life (of course). Vernon Demerest may be a pompous, adulterous egoist, but he's a damn good pilot, can keep calm in an emergency, and has genuine feeling for his friends and loved ones. D.O. Guerrero may have a bomber, but he's a pitiful, desperate man in need of a hug. Or therapy. It's the kind of book that I would jump at the chance to adapt.

Being thus satisfied, I got the movie and took a look. And it's interesting, because many people poo-poo the trend of 1970s disaster flicks, and they look down on the Best Picture nominations for The Towering Inferno, The Poseidon Adventure and Airport. Burt Lancaster thought it his worst film, and Ebert wrote, "Once the bomber becomes ridiculous, the movie does, too. That's good, because it never had a chance at being anything else."

Frankly, fellas, I loved it. I loved the ensemble (well, ok, Jean Seberg wasn't very good), I loved the pacing, I loved the editing, I loved the adaptation -- in the book, it's explained in a paragraph that the name just called over the P.A. system is a code for when the airport needs to assemble its police officers for an emergency ("All members of so-and-so's party..."). In the movie? "Get security." "What's the code name again?" Cut to police officers reacting. Bam, bam, next case. Loved it.

I loved the costumes -- Edith Head actually tried to put out an Airport Clothing Line that I absolutely would have owned. It failed, but I guess the 70s were a confusing time for everyone. I loved the Art Direction, so fascinatingly of its time, a look I've always been in love with. I loved the score by Alfred Newman, his final composition before his death, one that lost to Frances Lai's for Love Story. I guess I'll have to watch that one next because hot damn I loved Newman's score.

Helen Hayes won the Oscar for Best Supporting Actress; Maureen Stapleton won the Golden Globe. I disagree with both of these (LEE GRANT IN THE LANDLORD) but I get it. Stapleton's final scene gripped me, leaving me horrified as I realized the full implications of what just transpired. Thank God writer-director George Seaton put it in, because the novel completely forgets her character after page 300. Hayes, meanwhile, is a hoot, clearly having a grand ol' time as an old-lady stowaway. I think a win is excessive, but she commits herself to it, and she's probably the best part of the movie. Besides Dean Martin, I mean.

It's a lot of fun, and clearly people in 1970 knew how to have a good time. The film was a box office triumph and went on to receive ten Academy Award Nominations, including Best Picture -- and that when the field was only five-wide! (Yeah, they didn't need extra slots to make sure awesome movies got in alongside "Oscar-appropriate" films; it was all Oscar-appropriate) There's nothing lofty about it. I mean, Burt Lancaster blathers on about how airports need to adapt to changing times, greater need for more runways, etc., etc. That stuff was kind of boring in the book, too. But we all know that the movie isn't really interested in that stuff. It want sot entertain you, to give you an all-star cast and watch him have a good time. And it does this well. Isn't that award-worthy? Well, ok no, it isn't. But I do insist that it's nomination-worthy.
Posted by Walter L. Hollmann at 2:20 PM

I too love this movie, and though it's not really Oscar-calibre, I still don't mind it's nomination. It was well structured, fun, and has pretty interesting characters line up.

Walter...I think it's AWESOME that you watched "Airport"! And you have one up on me, my friend, because I have not yet read the book. I can't WAIT to see your contemporary casting of it.

Thank you for your kind mention...It meant a lot to me.

Glad to see others can appreciate the fun on display in the film.

Tom: Looked for Love Story on the Netflix Instant, couldn't find it. Watched Five Easy Pieces instead, though, to complete the supporting actresses of that year. Karen Black is astounding in that. Had I a ballot: