CINDY BAKERSFELD
Who is She: Mel's wife, a woman climbing the ranks of Chicago society without her husband. Realizing their marriage was dead long ago -- and citing the airport as one of the problems -- Cindy has started seeing other people. Because he chooses the airport over another society to-do tonight, Cindy goes to Lincoln personally to have it out with him one last time.
Originally played by:

Dana Wynter (Invasion of the Body Snatchers, Something of Value)
My Choice: Indie Spirit Nominee for Best Actress (Woman Thou Art Loosed) 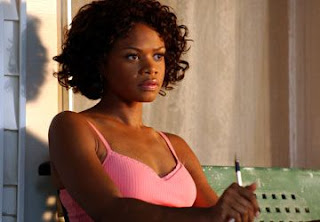 Kimberly Elise (Diary of a Mad Black Woman, For Colored Girls)
See, Cindy's not a bad person, she just has different needs that her husband is unwilling to serve. Elise can be classy like Cindy, but she can also play that complicated storyline without making her into a bitch.
INEZ GUERRERO
Who is She: The naive, struggling wife of D.O. Knowing that they're behind on the rent, the kids are living with her sister, and her husband got laid off, she's utterly confused by the appearance of a receipt for a ticket to Rome. It's not until later that she also realizes that some dynamite is missing...and becomes lost and horrified when she puts the two together.
Originally played by: Academy Award/BAFTA Award Winner for Best Supporting Actress (Reds), Golden Globe Winner for Best Supporting Actress (Airport) 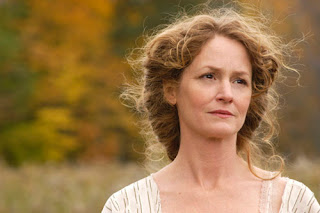 Melissa Leo (The Three Burials of Melquiades Estrada, Everybody's Fine)
Strangely enough, the Guerrero's are neither Spanish nor Italian. What the what? So yeah, I went to Leo when it came time for a working-class role, but for a different reason. See, we rarely get to see Leo in a weakened state, though we see her vulnerable. This would be a change-up for her, allowing her to play a woman who nothing but vulnerability. And she'd be great.
TANYA LIVINGSTON
Who is She: Public relations agent for Trans America (Trans Global in the film). Tanya is an efficient woman who takes her career very seriously. Divorced with a daughter, Tanya is strong and capable enough, but there is one man whose company she enjoys -- Mel Bakersfeld.

Jean Seberg (The Mouse That Roared, Paint Your Wagon) 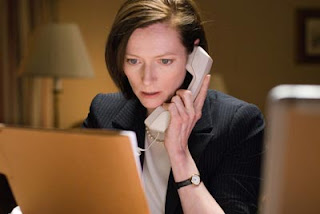 Tilda Swinton (The Limits of Control, We Need to Talk About Kevin)
She can be professional and buttoned-down, but she can also feel passion. It's that combination that she's been so adept at conveying in many of her roles, actually. Swinton likes to have fun, too -- doesn't Airport seem like the type of thing she'd do just 'cause?

JOE PATRONI
Who is He: The frank TWA menchanic who is charged with getting the Aereo-Mexican 707 off the main runway. Bad enough the plane got stuck in the mud, but that runway is the only thing standing between life and death for the passengers of The Golden Argosy. Patroni loves chewing on cigars and making love to his wife, reportedly at the same time. He's a guy who knows his job, and a few others', too.

Paul Giamatti (Duplicity, The Last Station)
Can he play blue-collar roughness? What do you think? I think yes, obviously, and I also think he's comfortable with a cigar.

HARRY STANDISH
Who is He: Customs official. He's trained to notice the odd behavior people exhibit when they're hiding something, and the way Guerrero holds his briefcase makes Standish suspicious. Unable to check himself -- Guerrero isn't coming into the country, but leaving for Rome aboard The Golden Argosy -- Standish reports his suspicions to Tanya. Good thing, too: his niece is aboard that same flight. 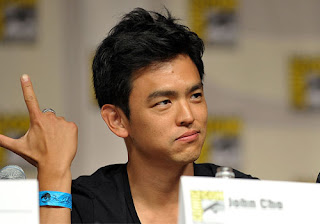 John Cho (Nick & Norah's Infinite Playlist, Star Trek)
I didn't think of him as being as old as Nolan. Cho is old enough to have been with customs a while -- he's thirty-eight, you know. An underused actor, really; he's more than Harold (though he's great in those films).
IN THE AIR

D.O. GUERRERO
Who is He: A demolitions man in construction, nothing ever goes right for Guerrero. Blessed with a short temper and poor judgment, Guerrero has single-handedly left his family broke. So what is his final solution? Take out a life insurance policy on himself, then detonate a deadly bomb aboard The Golden Argosy, heading across the Atlantic for Rome. A nervous, twitchy kind of guy, Guerrero is bound to screw something up. A defensive, dangerous individual. 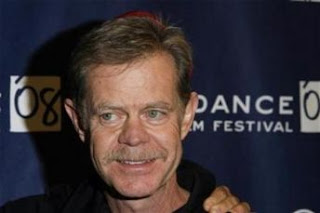 William H. Macy (Marmaduke, The Lincoln Lawyer)
Macy himself once joked about the amount of losers he has to play in films. The book described the character as tired-looking, with a sandy mustache. Refer to that picture above, please. Consider his desperation in films like Fargo and Magnolia and you'll understand where this is coming from.

CAPTAIN ANSON HARRIS
Who is He: Line captain aboard The Golden Argosy. He's flying tonight, but is in the middle of his six-month checkup, run by Captain Demerest. Harris is a nice guy, a flawless pilot, a man who refuses to put his personal moral standards on anyone else. 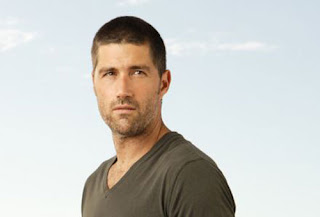 Matthew Fox (My Boyfriend's Back, Speed Racer)
I just wanted someone who could believably be on the same level as Hamm, not be too old or too young, who I could see as a pilot. Some actors just pop into my head when I'm reading a book; this is one of them.

GWEN MEIGHEN
Who is She: An English stewardess having an affair with Captain Demerest, she now carries his child. Gwen, a level-headed young woman and first-rate stewardess, is deciding whether to adopt or abort the baby when the whole rigmarole with the bomber begins. She is genuinely in love with Vernon, but doesn't expect anything in return...due to his married state.

Originally played by: Golden Globe Nominee for Best Actress in a Musical/Comedy (Who is Killing the Great Chefs of Europe) and Best Supporting Actress (Under the Volcano)

My Choice: SAG Award Nominee for Best Ensemble (An Education) 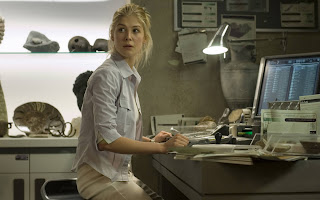 Rosamund Pike (Made in Dagenham, Barney's Version)
A beautiful English actress who's displayed a remarkable range of class and pluck in her film roles. She's just on the brink of filmmakers and audiences in the US discovering and appreciating her talents, and putting them to good use.

MRS. ADA QUONSETT
Who is She: An elderly widow from San Diego who frequently stows away on passenger planes to visit her daughter in new York. Caught by Tanya Livingston, she commits the ultimate rebellion by slipping out from TransAm's clutches and stowing away on The Golden Argosy. Anyplace is better than a return to California! What she doesn't realize is that the empty seat she chooses to occupy is right besides Guerrero and his bomb!

Originally played by: Academy Award Winner for Best Actress (The Sin of Madelon Claudet) and Best Supporting Actress (Airport), Golden Globe Nominee for Best Actress in a Drama (Anastasia) and in a Musical/Comedy (Herbie Rides Again)

Helen Hayes (A Farewell to Arms, TV's Murder with Mirrors) 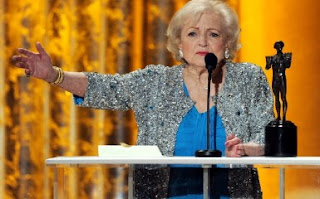 Betty White ("The Golden Girls", Lake Placid)
Yeah, we all saw this coming. Again, the most obvious is sometimes the best, and who would be better at playing this part than Betty White? If the First Lady of the American Theatre can handle it, I think it's good enough for the First Lady of Television.

YOUR PROTAGONISTS
MEL BAKERSFELD
Who is He: General manager of Lincoln International Airport. Bakersfeld has his hands full tonight: a snowstorm tying up air traffic and burying runways; a plane stuck in the middle of the main runway; protestors from a neighboring town demonstrating outside; a looming divorce with his wife of fifteen years; and a bomber on The Golden Argosy, piloted by his brother-in-law, Vernon Demerest. Mel is a serious man, formerly a sort of enfant terrible before a promised FAA appointment went sour. He's a logical person, but he doesn't always make the right decisions. Nevertheless, if there's someone you want in charge on a night like this, it's Mel Bakersfeld.

Burt Lancaster (From Here to Eternity, The Rainmaker) 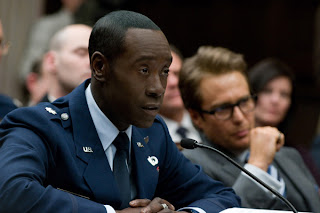 Don Cheadle (TV's The Rat Pack, Iron Man 2)
The novel described a lean man, and when I thought to myself, "Hm, who's a lean actor that could believably portray a leader strong enough to handle an airport?" Automatically, my brain latched on to Don Cheadle.

CAPTAIN VERNON DEMEREST
Who is He: The womanizing captain of The Golden Argosy, though he's not flying tonight. Instead, he's checking on the performance of Captain Harris, a routine checkup for all pilots every six months.  Demerest hates his brother-in-law, Mel, especially after Mel allows insurance vendors inside the airport. Demerest is convinced such a thing encourages bombers and wouldn't you know it? Despite his blunt, sometimes hostile, manner with Mel and subordinates, Demerest is tender with Gwen...he even thinks that he may love her back. Oh, and he may be a pompous pilot, but he puts that money where his mouth is. Even people who hate him know he's the best damned pilot out there. It's Demerest who keeps a cool head and devises a plan for taking out Guerrero. Will it work?

Originally played by: Golden Globe Nominee for Best Actor in a Musical/Comedy (Who Was That Lady?)

Dean Martin (The Sons of Katie Elder, The Cannonball Run) 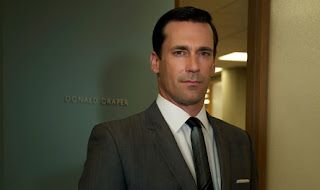 Jon Hamm (The Town, Sucker Punch)
Hamm playing a womanizer? Shocking! Mais serieuse, what I like about Hamm is his combination of the cad and the carer, as Demerest definitely is. Hell, get Jon Hamm and Matthew Fox in pilot's uniforms and you've got the female audience and half the male one (Pike in the stewardess uniform is the other half). Besides, Hamm's a pretty great actor, so the more we get of him, the better.

I have been waiting for this for SOOO long!!
The original Airport studded the cast with a broad array of celebrities and stars popular and indicative of the era (Dean Martin, Burt Lancaster, Helen Hayes, Jaqueline Bissett). You have honored the source material more, casting for the character rather than for celebrity, which is great.
Yeah, Betty White is the perfect stowaway, and has everyone's automatic good will going for her. Leo was a surprisingly good choice...I would like to see her vulnerable side. Matthew Foxx and John Hamm...Walter, you will have to write extra scenes to contain all of this beefcake...worth several viewings!!
Tilda Swinton would bring an art-house sheen to the proceedings, which in itself would provide the production with some ironic humor...
Oh, I could go on... Now I want to watch the original "Airport" again, doggone it!
Nice job my friend.

I'll admit, you had me at Leo subbing for Stapelton. I prefer Leo when she's at her least affected (which is why I'm not all for her work in The Fighter) and then Tilda for Jean (who I'll maintain was great in the original) and then Rosamund for Jacqueline. A thousand time yes.

I'm not all for Betty for Helen, a) because it seems too obvious and b) because Betty White annoys me (ducks for cover)/

MovieNut: get ready for the biopic...

Tom: Is it telling of me that I consider this an all-star cast? I always assume that Oscar = fame, but Hakwes and Weaver should have proven me wrong. As for Foxx and Hamm...in the book, Vernon tells Harris to change his shirt. Maybe they go to the locker rooms...?

Andrew: I went with Betty, but my only other option (in my head) was Whoopi Goldberg, and she just seems too young. Also, as a rabid Golden Girls fan...you *better* duck, sucka. ;)