Apologies to the honorable mentions for not finding room for them: Blind Beast, Goodbye, Mr. Chips, Hello, Dolly!, If...., Laughter in the Dark, Medium Cool, Oh! What a Lovely War, Paint Your Wagon, The Prime of Miss Jean Brodie, Salesman, Stolen Kisses, They Shoot Horses, Don't They? and The Wild Bunch.

The ten, in alphabetical order, after the jump....

A standard cop-vs-crook caper becomes a work of artful camp, with drag star Miwa as a female felon, right-wing author Mishima as a living doll, a kitschy theme song performed by its lead, and a surprisingly melancholy finale set amidst sets that wouldn't be out of place in the 1966 Batman series. It's Sax Rohmer (without all that baggage) by way of Joel Schumacher - in other words, a delight! The only 1969 Edogawa Rampo adaptation you can watch with Mom! 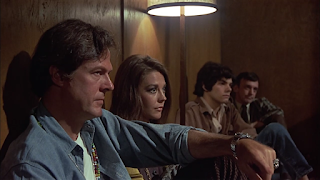 I swear you could make this film today and it would be just as relevant. Don't even a change a word, just let it all play out - from the long opening sequence at the retreat to the dreamlike finale, both a perfect balance of loopy hilarity and surprisingly touching, sincere emotional breakthroughs. What I like about Mazursky's work is his genuine affection for his characters, even as he mercilessly nails the absurdity of their behavior and circumstances. 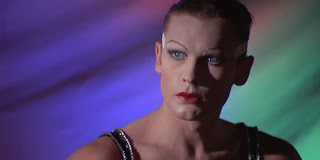 An engrossing, operatic work about the rise of Nazism and its inextricable link to capitalist greed, the supposed hustlers of the upper class easily maneuvered by opportunists with more than mere money in mind. Helmut Berger's beauty is put to unsettling effect; makeup and costumes lend an air of desperate glamour. There's one thing this movie needs: a longer runtime. It's just over two-and-a-half hours, but there's enough story and characters to justify a full three. Ah, who among us has not experienced that magical summer of youth, when it was just you and your best friend, competing over another's affections, leading you down a dark path towards violence and trauma? A superb drama of teens in a hurry to become adults, left to their own devices so that their parents can mess about off-screen like careless youths, and the speed with which innocent adolescent antics can turn into something more sinister. 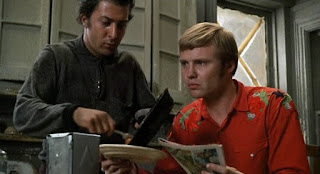 I've been listening to the soundtrack nonstop since seeing the movie, and not just for Harry Nilsson's version of "Everybody's Talkin'"! The harmonica theme by John Barry is John Buck, a lonesome cowboy entering a world he does not know and probably will never understand with nothing but a camp outfit and his big swinging dick. Yet onward he goes, determined and hopeful, even after blood spatters his jacket and his best friend pisses his pants on a Greyhound. Gritty, grim - beautiful.

The best Bond movie, the best Bond Girl, the best Bond Villain, the best Bond Song. Yes, it would have been amazing to see Sean Connery; yes, having George Baker dub George Lazenby's dialogue for the majority of Act Two is cuckoo; yes, 007's undercover identity doesn't make sense following his meeting Blofeld in You Only Live Twice. You can nitpick its place in the franchise, but the movie itself is tightly crafted, exciting, sexy, unexpectedly moving. This is the Bond I signed up for.

While Butch Cassidy uses the western to reflect on changing times and The Wild Bunch exposes it as a lawless era of violence and greed, Once Upon a Time in the West sees and embraces it all aas being part of its symbol of reinvention. Certainly there's violence and greed and lawlessness amidst an expanding American landscape - of course! - but amidst all the gunslinging and skullduggery is the story of a prostitute fighting for her American Dream. Who wouldn't love that? 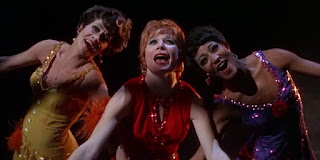 On the first try, Fosse demonstrates an understanding of what film can do, especially in regards to musical theater, better than many veteran directors - "Rich Man's Frug" and "The Rhythm of Life" are undeniable orks of cinema. Shirley MacLaine's performance is without ego, awkward and frustrating and dorky and so damn recognizable, someone who can't catch a break not for lack of trying, but for doing so in all the wrong ways. The best musical of the year...and it faced some stiff competition! 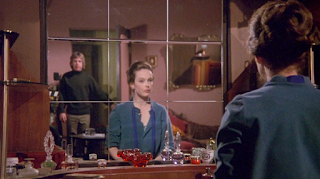 So obviously I have to explain why this is one of the ten best films of 1969, but half of my love is from how unexpected its narrative turns are. Suffice to say: a wealthy, lonely woman takes in a youth she finds shivering in the park outside her apartment; from there, a series of shocks and surprises effectively unveiled with a disturbing calm. Coolly directed by Robert Altman, thrillingly played by Sandy Dennis. 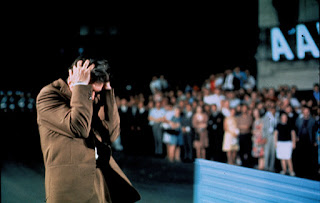 It's the rare film that opens up by saying, "Any resemblance to actual events, to persons living or dead, is not the result of chance - it is DELIBERATE." Thus begins this unapologetically passionate political thriller taking on totalitarian governments, fanatical dupes, apathetic bystanders, and how the gears of justice and democracy can be manipulated by the powerful to serve their own ends. I think I cried the first time I saw this film; now, I'm just so goddamn mad!

Tomorrow - the nominees for the 1969 Retro Hollmann Awards.

Email ThisBlogThis!Share to TwitterShare to FacebookShare to Pinterest
Labels: 1969, Black Lizard, Bob & Carol & Ted & Alice, Last Summer, Midnight Cowboy, On Her Majesty's Secret Service, Once Upon a Time in the West, Sweet Charity, That Cold Day in the Park, The Damned, Top Ten, Z