Further thoughts on some of the 1969 films discussed earlier this week. 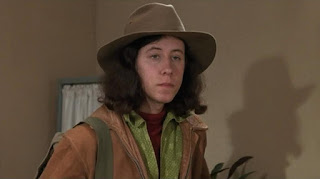 Overall an admirable, if cautious and somewhat skeptical, attempt to humanize and sympathize with a misunderstood movement, balancing clear-eyed observations about using "freedom" and "protest" to excuse shirking your own responsibilities with criticism of the establishment's adherence to form and appearance. If only Penn could consistently pay off on the characters he introduces, or handle the tonal whiplash between the comedy of the song and the drama of his and Herndon's additions. Guthrie proves a surprisingly compelling presence on screen.

Sex, class, change, and more, after the jump.. 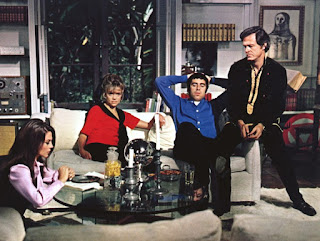 Like Alice's Restaurant, takes a predominately comedic look at counter-culture ideals, here looking at their growing influence on the mainstream - or, at least, on well-off west coast liberals with country club memberships. Mazursky, a great observer of elite flirtations with the fringe (see also I Love You, Alice B. Toklas from the year before and 1986's Down and Out in Beverly Hills), doesn't just rely on the comedy of these adults adopting youth culture - just, it seems, for the sake of excusing their own indulgences - but takes their motivations for doing so seriously. What are they looking for, what are they missing? Is it just about separating the purely physical from the emotional, or are they insecure people in search of constant connection? Simultaneously thoughtful and hilarious, it's easily one of the best films I've seen for this series. 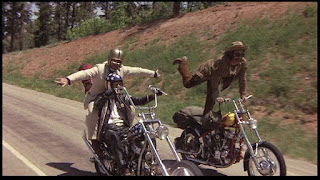 A movie that feels like it's saying something...but what, exactly? What's that arc of understanding that gets us from "They're gonna make it" to "We blew it"? Feels to me like shallow posturing from people who fancy themselves as being part of some revolution - could that be what Peter Fonda means by "we blew it", that he's realizing the superficiality of their way of life? If so, he's arrived at that conclusion about two hours later than I did, and that was a difficult two hours. These are, undoubtedly, the most boring people you'll meet. 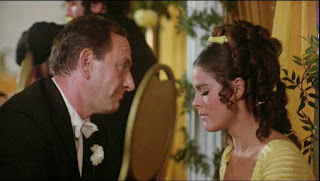 Am I getting older or am I just a snob? I find myself more interested in the parents, nouveau riche Jewish people intent on preserving the life they've become accustomed to while fighting over what that means for their children, than I am in the sardonic protagonist with a chip on his shoulder enjoying the benefits, both aesthetically and carnally, of his social climbing while also looking down on it. I'd watch a whole movie about Nan Martin's character. It just misses a fully fleshed-out point of view, but it's trying.

And then there's Goodbye, Mr. Chips, also concerned with the transitions of a New Society, but doing so via a musical remake of a 1939 Oscar winner about the career of a prim schoolmaster, from 1920s - 1940s. It shouldn't work, what with its bloated runtime, liberally reworked story, and emphasis on singer Petula Clark, yet I think it improves on the original. This has always been a story about aging and change, and this version better understands what is simultaneously beautiful and sad about it, capturing a kind of nostalgia for the present. It's a feeling captured not just by Arthur Chipping's Act One reflection on the transience of youth ("Where Did My Childhood Go?"), but in the various interpretations throughout the film of the school song ("Fill the World with Love").

From the IMDb quotes page:


There's white power, green power, black power, electric, horse, and man-power! I've got staying power. I've been massaged, barraged, creamed and reamed with every slop and goo on the market. I've tried the Yogi bit. Ying and yang, biff and bang, the works. You name it, I've done it. All in the name of youth and beauty.

The whole movie is like this. No one talks, they make purple speeches at each other. Brooks reunites Elmer Gantry leading ladies Jean Simmons (his wife) and Shirley Jones - it's great to see them together, Nanette Fabray is interesting fun as an enabler, the cinematography is beautiful. But that dialogue! Can't these people talk like people?! 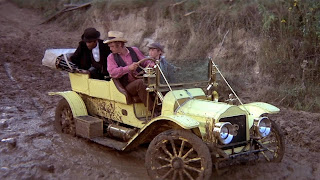 Boyhood coming-of-age hijinks in the Deep South, yada-yada. Inoffensively executed, I must admit I was kind of bored by it all. Nothing's bad about it, it's just...fine. There is one scene at the end with Will Geer that I found absolutely lovely. 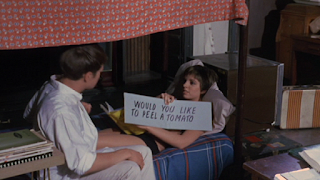 Liza Minnelli credibly announces herself as an onscreen force to be reckoned with (more on that Monday), and the song "Come Saturday Morning" sends me back to those trips I made on the Greyhound to visit my college sweetheart. Perhaps best seen by youths going through first heartbreak, because otherwise, there's not much to recommend in this tale of romance between a limp dish rag of a boy and cinema's most hostilely obnoxious girl. "There's a reason you're lonely!" I wanted to shout. 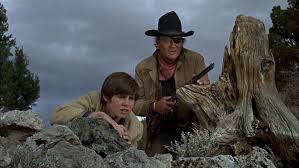 It could be the intentionally literal nature of the dialogue, where contractions are non-existent and people generally sound like they're reading from official documents (only John Wayne makes it work), but I've never gelled with this movie - any version of it. A straightforward showcase for its lead actor, I'm reminded of my favorite line from The Prime of Miss Jean Brodie: "For those who like that sort of thing, that is the sort of thing they like. 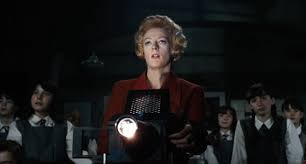 Speaking of! Honestly, this movie is probably a tetch too long, and even in Maggie Smith's capable hands, I'm not sure that Jean Brodie comes off as much deeper than a collection of gestures and pronouncements. But isn't that the point? Isn't that exactly what Pamela Franklin's Sandy comes to realize, that she is an ultimately shallow woman whose own incoherent worldview and offbeat pedagogy prove to be ultimately dangerous? Considering the times, it feels like a warning against the radicals and the unconventionals - look out for those free thinkers, they're the real fascists - but having known a few Miss Brodie types, I don't think it's an altogether unreasonable one. We should be mindful of those whose idea of teaching is not to educate, but to "correct", who seek to cultivate their own following. It's a thrilling, frightening, complex movie that I find difficult to unpack, particularly since it asks us to scrutinize our relationships with past favorite teachers and educators - and does so without automatically reinforcing "the old ways." I love it.