Even Anne of the Thousand Days, a prime example of Royal Melodrama, puts such an emphasis on sex and semen that it could only have been touched by a major studio in this period (well...unless Otto Preminger had his hands on it). Even the Western, Butch Cassidy and the Sundance Kid, is a hangout buddy flick with a decidedly non-western score, unorthodox romantic trio, and a fare-thee-well to the genre. Even the standard Liberal Cause Drama is the cynical, French-language, Socialist-sympathizing Z. Only Hello, Dolly! actually stands as a prime example of the Big Studio Musical, albeit with some anarchic twists. And Midnight Cowboy...well, hell, ain't nothing like Midnight Cowboy. Maybe that's why it won:


The nominees, after the jump...

Anne of the Thousand Days
produced by Hal B. Wallis
**
third and final nomination for Wallis; Golden Globe winner for Best Picture - Drama

A fascinating story, great performances - so why does it all feel so...dull? Gorgeously costumed and brutally paced, the longer it goes the more difficult a time it has in keeping the momentum going between the bedroom soap and the political drama - and since each influences the other, that's a problem. A disappointment - and even worse, a bore.

A deceptively laconic movie that works as both chill comedy and elegy for a time gone by (surely this is the tonal template for Once Upon a Time...in Hollywood). It's sepia-tinted cinematography is as effective as its faceless antagonists; the Bacharach score as buoyant as the chemistry between Newman and Redford...and Ross! It's a solid movie all around.

Honestly, you hardly notice that Streisand is at least two decades too young for the part, so energetic and fearless does she carry it off. Indeed, the whole ensemble - from Matthau to Crawford to McAndrew to Tune - is infectiously joyous, modern Marx Brothers in period drag. Overall, a terrific, exhilarating stage-to-screen transfer.

Brutal in its depiction of hungry people scratching their way through existence, their hopes and dreams rubbed out by desperation and violence. Yet there's also beauty in its story of two self-centered men who start out using each other and wind up protecting one another. The most unexpected love story of the year, buoyed by a colorful, dreamy New York and its surreal citizens.

I remain impressed with the way it juggles the different suspects, investigators, targets, and puppeteers of its central conspiracy, gradually expanding its cast of characters without losing the audience in information dumps - or, indeed, without lowering the volume of its passionate cry for justice. Angry with a sardonic sense of humor.

A difficult decision, honestly, since I was already familiar and in love with Z before I started this series - yet I find myself excited by, drawn to Midnight Cowboy. New and shiny vs. old and familiar? Will my vote really be about what I think is best, or will it just capture my mood of the moment? Hell, isn't that any ol' vote anyway? OK. Let's get to it. 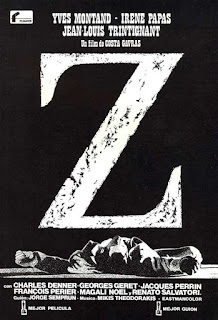