What a difference 50 years makes, huh?


In 1969, all these men were stars, nigh untouchable - the newcomer was Jon Voight, winner of the Most Promising Male Golden Globe. The rest were legends, heartthrobs, cover stars, and even though they each courted their fair share of controversy, their status was unquestionable. Members of the public may object to the politics of one, the treatment of women by another, but we shrugged and said, "That's Hollywood!"

Fast forward 50 years. Voight, who finally won an Oscar for the anti-war film Coming Home, is a divisive figure politically, and while he currently enjoys a regular job on Ray Donovan, it's hard to imagine him being embraced again by the Academy. In 2017, Dustin Hoffman was accused of sexual misconduct by seven different women whose experiences crossed decades. John Wayne, who had plenty of critics during his lifetime, was recently blasted on social media for racist and white supremacist opinions he gave during a 1971 Playboy interview. Richard Burton comes off reasonably well, if mostly best-known for being Mr. Liz Taylor, while Peter O'Toole...actually, I think we're good with Peter O'Toole - I think it helps that both men's main troubles were rooted in their alcoholism, and each sobered up.

The point being, our perceptions of people and the standards to which we hold our stars have changed significantly since The Duke was crowned king - or at least, people are more careful about who they publicly praise. Yesterday's idols are today's unmentionables. That's what I see when I take a look at this lineup: either dead, canceled, or both.

But have the performances held up? Let's take a look!

A surprisingly sensitive portrayal of a man torn between his roles of sovereign and husband. I mean, the sovereign wins out, of course, but Burton credibly plays the moments of self-reflection intentionally clouded by self-deception.

Cast anyone else and it's a supporting role - but would anyone else get it to a nomination? The rotted teeth, the voice, the limp - these choices should come off as mannered, but his characterization is authentic, empathetic, subtly conveying the undercurrent of affection. He becomes the movie's heart. 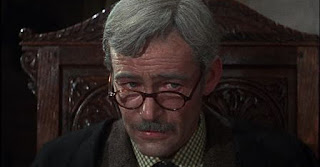 O'Toole's previous nods were for larger-than-life shapers of history. Mr. Chipping is mild and modest: arms at his side, downcast eyes, even his singing is a mutter. Yet he's quietly confident in himself, his work, and his love for his wife. His arc from self-serious to...same, but now with jokes, is delightful. 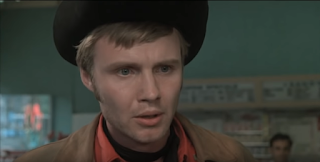 Just the right mix of naiveté and cockiness to make his fish-out-of-water wannabe-gigolo routine stick. He also gives the right amount of ambiguity, even to himself, to sell the developing intimacy with Ratso. What horrifies him at the movie theater: what he's doing, or that it's fairly easy for him?

John Wayne as Rooster Cogburn
True Grit
***
second and final nomination in this category; Golden Globe winner for Best Actor in a Drama

The only reason to watch the movie, really. The literal dialogue, labored on everyone else's lips, sings naturally in his. Cogburn's softening up isn't overplayed, but a natural extension of who he is and what he likes - and he likes gumption!

Naturally, the eventual winner is my least favorite (though not hated!) of the nominees. But I surprise myself by awarding my own vote - once again - to...

Tomorrow, the nominees for Adapted Screenplay: Anne of the Thousand Days, Goodbye, Columbus, Midnight Cowboy, They Shoot Horses, Don't They? and Z.