So we begin our journey through the Oscar-nominated films of 1969.

It's not often that one of the biggest wins of the night goes to Best Original Song, but here we are. Like "Moon River" eight years earlier, "Raindrops Keep Fallin' on My Head" was an immediate phenomenon, the #4 song of 1970, and apparently, an automatic addition to the American Songbook, with at least thirteen cover versions from all over the world released within a year of the initial B.J. Thomas recording. I even remember the first time I heard it: middle school, listening to South Florida's oldies radio, Majic 102.7, hosted by the Tall Italian himself, Tom Caminiti. You've heard it, your parents have heard it, everyone knows it. It helps that it came from the number one film of the year.

The rest of the field were all future standards. My sister used to play "Jean" on the piano; Lea Salonga performs "What Are You Doing the Rest of Your Life?" as part of a Legrand-Bergman medley in her recent concert album The Story of My Life: Live from Manila; "True Grit" was as tied to Glen Campbell's legacy as "Wichita Lineman". It's a lineup of genuine hits and legends - let's take a listen.

This song really is quite terrific, even if it is jarring when it comes up in the film.

"What Are You Doing the Rest of Your Life?" from The Happy Ending
music by Michel Legrand
lyrics by Alan and Marilyn Bergman
*

A great song, a favorite of mine; I've never actually heard it within the movie. The tune yes, the lyrics no. Does that count? How'd it qualify?

A beautiful song complementing the bittersweet dreaminess of first love depicted in its film.

A fitting title tune, exactly what it needs to be.

The catchy "Raindrops Keep Fallin' on My Head" won the Oscar:


A huge hit at the time, even a Grammy nominee for Song of the Year (it lost to "Games People Play"). I can't get over how jarring it is in context, though, so my vote goes to: 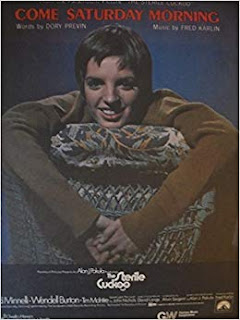 KARLIN / PREVIN
for
"COME SATURDAY MORNING"
from
THE STERILE CUCKOO

Email ThisBlogThis!Share to TwitterShare to FacebookShare to Pinterest
Labels: 1969, Butch Cassidy and the Sundance Kid, Oscars, The Happy Ending, The Prime of Miss Jean Brodie, The Sterile Cuckoo, True Grit