The category is - Best Music, Original Score for a Motion Picture (Not a Musical). The nominees are:


The Fox
Lalo Schifrin
***
second of four nominations in this category; Grammy Award Nominee for Best Original Score Written for a Motion Picture


The Shoes of the Fisherman
Alex North
****
tenth of 14 nominations in this category; Golden Globe Winner for Best Original Score

The Oscar winner: John Barry, his second win in this category (third overall). He was a no-show, and co-presenter Gregory Peck (with Rosalind Russell) made a gay joke.


You may remember Roz also made a gay joke while presenting Best Director. Of course, '68 had been quite a year for "gay" cinema, something we'll get into further next week, I suspect. Meanwhile, my vote: 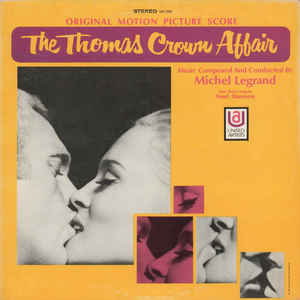 Tomorrow, the nominees for Best Adapted Screenplay: The Lion in Winter, The Odd Couple, Oliver!, Rachel, Rachel, and Rosemary's Baby.

Email ThisBlogThis!Share to TwitterShare to FacebookShare to Pinterest
Labels: 1968, Alex North, Jerry Goldsmith, John Barry, Lalo Schifrin, Michel Legrand, Oscars, Planet of the Apes, The Fox, The Lion in Winter, The Shoes of the Fisherman, The Thomas Crown Affair