A musical, three epics, and a drama.

Let's take some time to listen to some music, shall we?

Alex North for The Agony and the Ecstasy
***
It's lovely, the right mix of epic, intimate, and holy. It's your typical roadshow sound, really.


Maurice Jarre for Doctor Zhivago
*****
Now this is how you do an epic roadshow score! "Lara's Theme" sweeps you into the romance, revealing itself in unexpected moments -- like a moon shining in the sky, a beacon showing the way.


Alfred Newman for The Greatest Story Ever Told
****
One of the things I admire about this film is its refusal to be bombastic. Newman adapts his score accordingly -- it's subtle, it's moving, and it saves its big guns for resurrection and ascension -- in which case, it adapts Handel's "Hallelujah" chorus for full effect.


Jerry Goldsmith for A Patch of Blue
*****
What does bittersweet sound like? Probably like this -- simple and elegant, Goldsmith captures the gentleness of the story in his main theme, while creating genuinely upsetting moments like the blind crosswalk scene. Beautiful.


Jacques Demy/Michel Legrand for The Umbrellas of Cherbourg
****
If Jarre's Zhivago score sweeps, Legrand's Umbrellas score swoons -- nothing could sound more vital than the love theme that carries Genevieve and Guy through the film, while the "Recit de Cassard" is full of a subtle longing, even if it is more straightforward. But still -- why does Demy get credit here, and not in the actual movie? 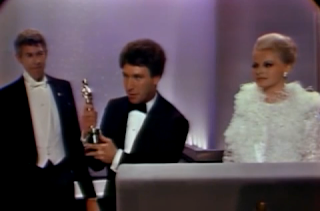 Yes, the same. It's incredible.