The War! It happened in black-and-white! At least, that's the way Oscar preferred looking at it, with three war films nominated in Cinematography; the other two contenders were a leading-up-to-the-War film and a social issues drama. Well, OK, I suppose they were both social issues dramas, but only one of them had Nazis.

So, what have we got? In Harm's Way, Otto Preminger's epic about Navy men and women in the aftermath of Pearl Harbor. King Rat, Bryan Forbes' dark comedy about the hustle in a POW camp. Morituri, Bernhard Wicki's thriller about a saboteur aboard a German shipping boat. A Patch of Blue, Guy Green's blind girl-meets-black boy romance. Ship of Fools, Stanley Kramer's ensemble drama about humanity, baby, which went home with the Oscar.

But what do I make of all of it? Glad you asked.

Loyal Griggs
*****
From its first moment, a tracking shot leading to an officers' party the night before Pearl Harbor, it reels us in. Couple that with Pearl Harbor itself, a meeting in an island bunker, a nighttime sea battle, beach trysts...I mean, this is pretty lick-able work, is what I'm saying. 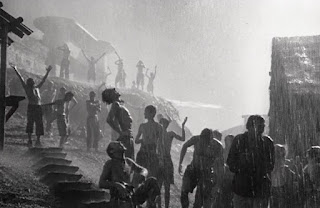 Burnett Guffey
****
A hell of an opening shot -- light breaking over a steamy hill; you think it's a man in a chair, but it's actually an emaciated colonel sitting on the latrine. A gorgeous shot that neatly establishes the blackly comic tone of the film. We'll see similar beauty again and again, whether it's looking at slumbering soldiers through the gauze of their mosquito nets, or locking eyes with a row of men as the reality of the end of the war slowly dawns on them. Inventive. 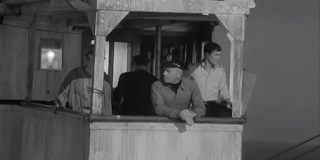 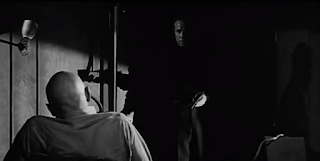 Conrad L. Hall
****
Does war just naturally make for great cinematography? Not always beautiful; indeed, much of the time things are lit to further embellish the ugliness of both the setting (Nazi freighter with prisoners aboard) and the people (some of those prisoners, Nazis, etc.). Love the daytime fog sequence, but one shot of Yul Brynner slumped in a chair, light streaming through a porthole amid smoke, knocked me out!


A PATCH OF BLUE

Robert Burks
***
Convinced some of this has to do with moments where Selina is in the dark, such as when she's sitting alone in Gordon's apartment, or weeping in the park during a downpour. But much of it, too, is from P.O.V. moments in Selina's past, and while I appreciate that some parts of those sequences are out-of-focus, it's still a little...weird. 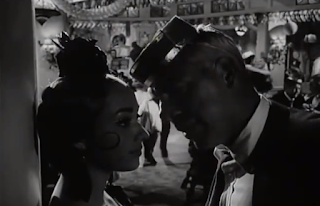 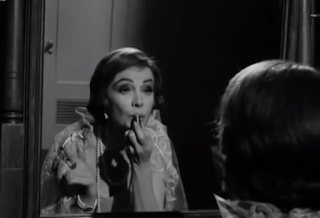 Ernest Laszlo
*****
I can think of multiple shots I want to keep forever: a sweating Simone Signoret, lights on, in need of a fix; Vivien Leigh having an epiphany about aging in front of the mirror; Vivien Leigh dancing the Charleston; a young American confessing a recurring nightmare, hidden behind the headboard; the silhouettes of a 19-year-old German and the woman about to de-flower him; a body collapsed on deck.

Oh, Ernest Laszlo, I love the hell out of you, but I have to go with:

LOYAL GRIGGS
for
IN HARM'S WAY

Next: if music be the food of love, you could do worse than the Original Score nominees! The Agony and the Ecstasy, Doctor Zhivago, The Greatest Story Ever Told, A Patch of Blue, The Umbrellas of Cherbourg.