Cinema '65: The Abbess and the Racist

I'm sure one of the surprising omissions from 1965's Supporting Actress lineup was Joan Blondell in The Cincinnati Kid. Blondell, after all, had been nominated for the Golden Globe and won at the National Board of Review. But it's not as though the eventual nominees were without love.

At the Golden Globes, Ruth Gordon, Joyce Redman, and Peggy Wood were nominated alongside the aforementioned Blondell and Thelma Ritter for Boeing Boeing.

You may have noticed...only the Academy honored Shelley Winters' work as the monster momma in A Patch of Blue. Of course, Shelley's was the winning performance, scoring a second Oscar for the actress on her third nomination -- and she would return for The Poseidon Adventure in 1972. 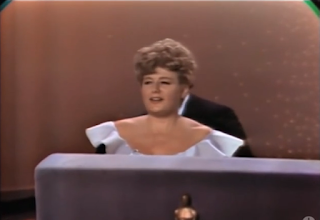 But obviously, the real story here is the first of many nominations for the incomparable Maggie Smith. This was her first nomination at the Oscars; the very same role got her nominated at the Golden Globes for Lead Actress in a Drama. Smith was also honored at the BAFTAs...albeit as Best British Actress for Young Cassidy. As we all know, she would soon return with 1969's The Prime of Miss Jean Brodie -- and this time, she would win the Oscar.

Ruth Gordon in Inside Daisy Clover
****
The role: a comically loopy mother who's actually a little crazy -- and when committed, she's completely mute. The performance: surpasses the stock character demands. She doesn't overdo any of her opening scenes, giving The Dealer a recognizable humanity that pulls you to her. Even when she's retreated into silence, she communicates so much real fear, so much determination to concentrate. It's a lovely performance.

Joyce Redman in Othello
***
The only flaw with Redman's performance is that her Emilia is so watchful, quick, and intelligent, that I cannot help thinking she's way too shrewd to fall for Iago's tricks the same way everyone else does. Played by Redman, Emilia should be way more suspicious of that handkerchief plot. But generally, it's fine work, with Redman proving herself to be an actress who can have chemistry with anybody in the room. There's an inner life to this character, happening off-screen -- she's real.

Maggie Smith in Othello
****
No vinegar here; young Smith plays the innocent Desdemona, complete with musical voice and gentle smiles. Des is a character that could very easily fly into hysterical mode -- after all, she has to contend with a suddenly jealous husband -- but Smith gives her a certain strength, the kind often felt in people who love wisely and too well. Her sudden tone when Othello first hints that she might be unfaithful -- strong, a little "excuse me, how dare you" -- is perfect.

Shelley Winters in A Patch of Blue
***
The nomination (and win) comes, I'm sure, from her big scene where she discovers her daughter's friendly with a black man, starting with screaming violence, finding its way to sudden uncomfortable comedy, a blink-and-you'll-miss-it moment of motherly concern, and right back to "eh" and exhaustion.  It's the scene that has it all -- Rose Ann's need for power, her resentment of her daughter's youth, her uneasy relationship with her father. It's a great scene -- and a fine performance -- but overall, I think Winters' disgust with the character is rather obvious. Not quite Mo'Nique. 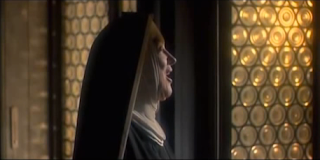 Peggy Wood in The Sound of Music
****
You can never really underestimate what natural warmth can do for a performance -- and really, that's an important quality for a Mother Abbess to possess! Wood presents us with a soft-spoken, loving woman, who is the nevertheless stern and capable of frustration -- even she asks how one makes Maria "listen to all you say", and she looks surprised when she hears Maria feels she must choose between the Captain and God. And she may be lip-syncing in the dark, but girl sells "Climb Ev'ry Mountain".

I like Shelley Winters enough, but I must go against Oscar and vote for:

RUTH GORDON
for
INSIDE DAISY CLOVER

Three stars seems too little for Joyce Redman, for me. I'd give her four stars easily while flirting with five because I think she emerges almost easily as the film's MVP. She's the only one who doesn't falter for even a second opposite Laurence (perhaps because she has the least screentime with him...?) but there's more. Emelia is easily, indeed, a perplexingly opaque character - what does she think is happening around her? But Redman makes that Act Five breakdown work so very well, she's forced to be the life force of the movie and does it so well. I'm so annoyed that the film cuts her and Smith's final scene when she sings of the willow. There's a good five or ten minutes of dialogue left, and their rapport is the film's strongest. That 1965 Othello truly is a bizarre thing to behold.


(I wish Jacobi had joined Finlay as a supporting actor nominee.)