Ah, Adapted Score, the unusual Oscar category now relegated to history, alongside Best Choreography and Best Assistant Director. We've discussed the odd history of this category before, so like -- let's just get to it.

Cat Ballou
DeVol, adapting the music of Jerry Livingston
****
A surprising use of electric guitars makes Cat Ballou stand out among other westerns, western comedies, comedies... DeVol takes the central theme by David and Livingston, using it romantically, ominously, triumphantly, even dancing-ly! It's wonderfully straight-faced.


The Pleasure Seekers
Lionel Newman/Alexander Courage, adapting the music of James Van Heusen
***
Upbeat with a Spanish flavor, the kind of thing that makes you groove your shoulders. And really, what else could one ask for in a rom-com pseudo-musical? It's on-message!


The Sound of Music
Irwin Kostal, adapting the music of Richard Rodgers
*****
Presents new arrangements for songs like "Climb Ev'ry Mountain" and "My Favorite Things"; makes the appropriate choices for which song suddenly becomes a waltz, and which is played on a church organ; and even includes a song cut between Broadway and Hollywood as an underscore for the number's original singers. Ingenious.

A Thousand Clowns
Don Walker, adapting the music of Walter Donaldson/Julius Fucik/George Frideric Handel/George Frederick Root/John Philip Sousa
***
Murray Burns is a New American Philosopher, really, with his own views on the importance of individuality and freedom -- so of course the score is marching music and children's hymns, deployed bombastically at appropriate moments; the classic 20s tune "Yes, Sir, That's My Baby"; and Handel.

The Umbrellas of Cherbourg
Michel Legrand adapting his own score
****
Confusing indeed -- Legrand is credited in the film as sole composer and orchestrator, yet he is only nominated solo in this category -- he shares a nomination with Jacques Demy in the Original Score category. Never sure of the differences in such cases, since Legrand is arranging his own original music. Seems a weird fit, but I do love the chaos of the garage scenes, and the little moments where the music seems to get ahead of the rhythm of the words (I believe this happens just prior to "I Will Wait for You").

In this case, I gotta go with Oscar, and give my vote to... 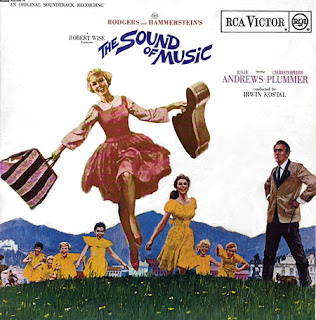 IRWIN KOSTAL
for
THE SOUND OF MUSIC

Best Actor is next -- Richard Burton in The Spy Who Came in from the Cold, Lee Marvin in Cat Ballou, Laurence Olivier in Othello, Rod Steiger in The Pawnbroker, Oskar Werner in Ship of Fools