Cinema '65: The Shadow and The Sweet-Heart

One thing I don't think I've ever done is look at Original Song through the lens of the Grammy Awards -- which is crazy, because there are always chunks of time when the two go together, and not just because the music industry honors soundtracks.

In 1965, two of the nominees for Best Original Song were also up for Song of the Year...and one of them for Record of the Year. That one was "The Shadow of Your Smile" from The Sandpiper, which actually won Song of the Year over "I Will Wait for You" from The Umbrella of Cherbourg and "Yesterday" from Help!. And as you'll see, I have...thoughts...about that.

Help!, by the way, also competed against The Sandpiper and The Umbellas of Cherbourg for the Soundtrack Grammy, though it was completely shut out at the Oscars. The follow-up to Original Screenplay nominee A Hard Day's Night, Help! is a bizarre caper film in which the Beatles tour the world in an attempt to escape an Eastern cult bent on taking a sacrificial ring that somehow wound up with Ringo. Only seven of the fourteen songs on the album are in the film; none of them are "Yesterday".

In another bit of news, Tom Jones won the Award for Best New Artist! And he was quite busy in Hollywood, too, recording the title song for the James Bond flick Thunderball, as well as one of his two most popular songs, "What's New Pussycat?" from the film What's New Pussycat? -- which wound up being nominated right here!

Let's take a look at these Grammy-honored songs and their other competitors, after the jump.


"The Ballad of Cat Ballou" from Cat Ballou
****
Ironic lyrics, a hummable tune, a set-up that still leaves room for surprise. Appears throughout to comment on the action, so narratively -- and tonally -- important. It's pretty perfect.


"The Sweetheart Tree" from The Great Race
*****
Heard thrice in the film -- once during the Overture, again during the Entr'acte, and finally, in a scene reminiscent of Breakfast at Tiffany's "Moon River" moment, when Natalie Wood strums on a guitar for Tony Curtis's benefit. For a moment, the film becomes a sing-along, and it is fucking weird, especially since it's such a sincere moment plopped in the middle of what is essentially a live action Looney Tunes. But it's hard to resist the magic of Mancini and Mathis -- a beautiful tune.


"The Shadow of Your Smile" from The Sandpiper
*
Heard during the end credits. A real snooze of a song. Even had to look up the title. And it won!

"I Will Wait for You" from The Umbrellas of Cherbourg
*****
The love theme is repeated at least twice, but I believe the nomination is for its first iteration -- Genevieve and Guy holding each other, knowing their time is limited, making that decision to spend one night together. The English-language version was the one performed at the ceremony, but whichever one you go with, its passionate, vital romanticism is impossible to ignore.


"What's New, Pussycat?" from What's New, Pussycat?
***
If you're gonna open your sex comedy with anything, why not this rousing, sexy, dance-able tune? The movie's dated as hell, but the title song is rightfully timeless, establishing the kooky romp about to unfold. It helps, too, that the phrase itself is referred to multiple times in the film, as Peter O'Toole's playboy (inspired by Warren Beatty) calls every eligible lady he meets "pussycat." Better than the movie.

"The Shadow of Your Smile" won the Grammy and the Oscar and that's nonsense. I award: 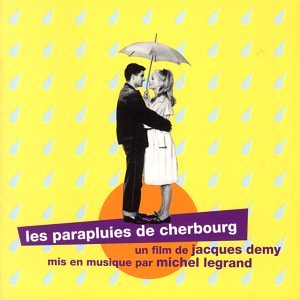 "I WILL WAIT FOR YOU"
from
THE UMBRELLAS OF CHERBOURG

Next: things are starting to wrap up...we're honoring Best Actress next! Julie Andrews vs. Julie Christie vs. Samantha Eggar vs. Elizabeth Hartman vs. Simone Signoret!