Cinema '65: The Artist and the Messiah

'Twas the days of the roadshow picture, when two-hour flicks had intermissions and comedies could last 3 hours. Take the family, pay the fee, spend the day gazing up at the widescreen pleasures the studios could afford to bring you. In LA, you can still get that kind of thrill from the occasional screening at the Egyptian -- South Pacific on a brand new print! Auntie Mame! Lawrence of Arabia anniversary tribute -- and when I do go, I wish others had such an opportunity, for some films are true big-screen experiences.

The five nominees for Color Cinematography are all such films -- beautiful, detailed, and awe-inspiring. Well, four of them anyway. Let's look.

THE AGONY AND THE ECSTASY 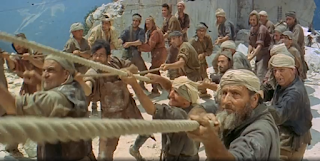 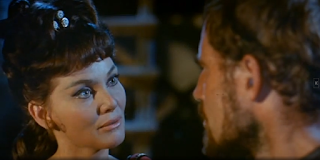 Leon Shamroy
****
Maybe the candles give off a bit more light than one expects, but it's still a lovely-lit thing. How can one forget the fading light as Michelangelo struggles to stay awake, working deep into the night, only to knock out the candle? Or the light that inspires him when he watches the sunrise that inspires his greatest masterpiece? Or the grey that suddenly clouds the whole screen when Julius faces sure defeat -- and possible death? Thoughtful.

Freddie Young
*****
There's an incredible shot where a single candle thaws a window from inside, a pinhole of light slowly opening to reveal a lover's confession. There's another incredible shot where Zhivago, shrouded in darkness, looks at Lara, only her hand illuminated, until suddenly the lights come on to reveal Komarovsky. And Komarovsky on the stairwell! And the opening shots of the female workers! And Strelnikov's big reveal!

Russell Harlan
**
Great work with the effects, driving sequences, makeup, etc. Overall solid, though I don't know that it does much to distinguish itself -- or its individual set pieces, for that matter.


THE GREATEST STORY EVER TOLD

Loyal Griggs/William C. Mellor
*****
Some of the most beautiful outdoor photography I've seen in cinema, and one of the few period films to actually look like it was made pre-electricity. Almost edges into being too dark, but it rather adds to the magic, mysticism and sobriety of certain scenes -- I think of the desert temptation, half of which is done in intimate silhouette, or the conversation between an imprisoned John the Baptist and a fearful Herod. Beautiful, haunting moments.


THE SOUND OF MUSIC

Ted McCord
****
Surely much of this comes from those nighttime scenes, where any couple who reaches the gazebo is so beautifully lit, they look like angels kissed by the moon. Or could it be for the entire "Climb Ev'ry Mountain" sequence, all shadows and gold, people in the dark moving toward a brighter something? Hell, it could just as easily be the opening shot.

Doctor Zhivago won -- and goodness gracious, why shouldn't it! -- but my own vote, after much deliberation, goes to...

LOYAL GRIGGS AND WILLIAM C. MELLOR
for
THE GREATEST STORY EVER TOLD

Next up: let's sing a little ditty with the nominees for Original Song -- Cat Ballou, The Great Race, The Sandpiper, The Umbrellas of Cherbourg, and What's New Pussycat?