The 1982 train continues - with sequels! Mostly! Only seven films reviewed herein instead of the regular 10...

Rocky's newfound success makes him an easy target for hungry up-and-comer Clubber Lang. Light on character, big on montages! Manages to raise the stakes and numb you to them. Carl Weathers walks off with the movie.

Sequels to Halloween, Star Trek, Grease, and more, after the jump...

A doctor suspects a novelty mask manufacturer of deviousness. An original storyline makes for a weird entry in the series - but that's not a bad thing, as the movie takes on Halloween traditions and legends for a superbly spooky flick. Violence, dead kids, moody score - it's a perfect Halloween movie, even without Michael Myers.

Star Trek II: The Wrath of Khan (#6 at the box office)
dir: Nicholas Meyer
scr: Jack B. Sowards, story by Harve Bennett and Jack B. Sowards, based on the television series created by Gene Roddenberry
Sequel to: Star Trek: The Motion Picture

An older Kirk takes command of the Enterprise as an old nemesis reemerges. Juggles a little more than it needs to, but as an overall meditation on aging and reconciling with the past, much less within the context of a Star Trek flick, you could do worse. 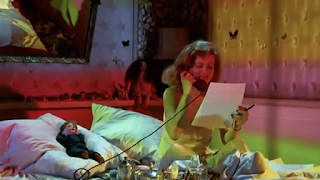 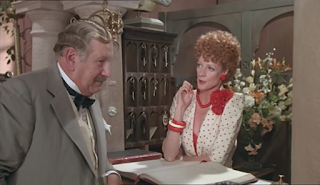 Evil under the Sun


dir: Guy Hamilton
scr: Anthony Shaffer, based on the novel by Agatha Christie
Sequel to: Murder on the Orient Express, Death on the Nile

Hercule Poirot solves a showbiz-centric murder at a resort. Campy fun, complete with bitchy one-liners, over-the-top characters, and gaudy costumes. Maggie Smith gets the best lines, but Roddy McDowell's nipping at her heels - and the scenery, for that matter.

First Blood
dir: Ted Kotcheff
scr: Michael Kozoll & William Sackheim and Sylvester Stallone, based on the novel by David Morrell
Sequel to: Nothing; this is the first Rambo flick, baby!

Vietnam vet and small-town cops have a disagreement. Treatment of war veterans becomes clear in opening and closing scenes, the latter of which enables Stallone to really give it his all - a much better use of his gifts than Rocky III. But oh my, what a weird little movie.