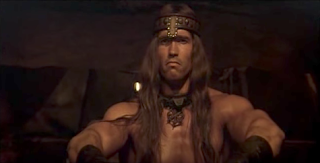 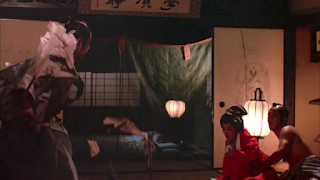 The House Where Evil Dwells
dir: Kevin Connor
scr: Robert Suhosky, based on the novel by James Hardiman

Man gets sucked into video game. Weird movie! I spent a good bit of this movie shouting, "What?!" and, "Wait, what's happening?!" and oftentimes, "What are they talking about?!?" Cool VFX and costumes, though, and Wendy Carlos did the score, so that's always welcome. (BTW, the Academy disqualified it from VFX Oscar consideration because it felt using computers was cheating!) 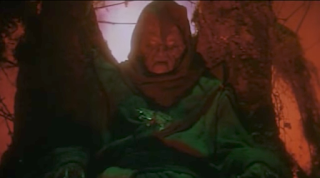 A prince-turned-barbarian seeks vengeance against a wicked king. The movie with everything: a sword that shoots blades, a demon sorcerer summoned from a coffin of screaming bloody faces, whorehouse friendships, non-stop inventive violence. What a hoot! 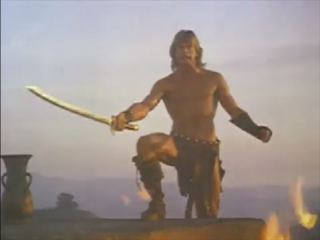 A man who can talk to the animals leads a rebellion against a wicked high priest. Juvenile in its relationships and sense of humor. Poorly paced, doofy hero, doesn't quite nail the details of its mythos. But the winged demon creatures sure are......fly. 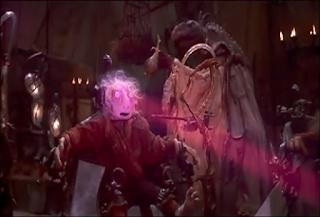 A young hero must find a shard of the Dark Crystal and end the rule of the Skeksis. The "hero" is kind of a wash - for Christ's sake, the woman does all the work! - but it's a fully-realized universe, like something out of a prophetic dream. Unusual, unforgettable.

The Secret of NIMH
dir: Don Bluth
scr: Don Bluth & John Pomeroy & Gary Goldman & Will Finn, based on the novel Mrs. Frisby and the Rats of NIMH by Robert C. O'Brien

A field mouse must work with rats to save her family. Don Bluth does a magnificent job at world-building, rarely missing a detail, but it does make for a rushed villain subplot, while comic relief crow is detrimentally tin-eared.

A teen struggles with the beast within him. A great horror looking at inherited trauma and vengeance. People's behavior is recognizably human, even in the context of a monster transformation film! And you may learn a thing or two about cicadas.

Swamp Thing
dir/scr: Wes Craven, based on the comic by Len Wein and Bernie Wrightson

Noble scientist becomes swamp monster ith super strength. creature that wreaks havoc on nefarious schemes. Craven's grasp on camp, cadence of comic books is all too rare, a relief. Budget hampers monster fight finale, not so much actual Swamp Thing. Adrienne Barbeau proves once again to be adept at sales. 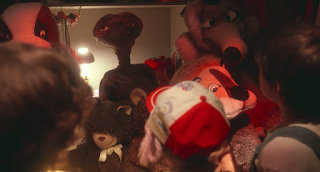 A boy befriends an alien. The movie's nothing without that connection between the two, and young Henry Thomas is outstanding, with all the wonder and certainty of youth, ably supported by scene-stealing Drew Barrymore, under-appreciated Robert MacNaughton, and phenomenal Dee Wallace, doing much more than what she's being given. Occasional moments feel out of place - that Quiet Man bit that caps the frog escape is bizarre, and the older brother's friends seem like unnecessary extra pushes on an emotional button that's long been pressed (also, their dialogue and performances are terrible). But my heart is not made of stone - overall I liked it...and I did cry.

Email ThisBlogThis!Share to TwitterShare to FacebookShare to Pinterest
Labels: 1982, Conan the Barbarian, ET the Extra-Terrestrial, reviews, Swamp Thing, The Beast Within, The Beastmaster, The Dark Crystal, The House Where Evil Dwells, The Secret of NIMH, The Sword and the Sorcerer, TRON