Weaknesses We All Possess: Original Screenplay, 1982

I promised I'd be making fairly loose connections between the films of 1982 and the films of 2017, and for the most part, Original Screenplay writes itself.


Diner, for instance, is classic autobiographical filmmaking, with Barry Levinson borrowing elements from his own youth to tell a highly personal yet universal story about maturity. Obviously, it's the Lady Bird of 1982, right down to the writer taking the reins of director.

E.T. the Extra-Terrestrial frequently nods to classic cinema within its surprisingly human story of the relationship that develops between a somewhat isolated boy and the lost alien creature who just wants to go home. Be prepared for this comparison to come up a lot, because, duh, The Shape of Water.

An Officer and a Gentleman unexpectedly makes for a great double feature with The Big Sick. Both depict a romance that comes during a young man's pursuit of a career, as well as the relationship he develops with parental/authority figures who aren't his family.

Tootsie is the comedy with a lot more on its mind - namely, society's treatment of women - whose perfect construction reaps huge rewards on subsequent viewings. See also: Get Out, the satire of race relations whose every scene, comic or otherwise, goes for insight and dread.

That leaves Gandhi and Three Billboards outside Ebbing, Missouri. Both find fascinating ways to address white power structures and the literal explosiveness of blind rage, each with its own bald man preaching love and calm over hate.

These are the stories, themes, genres that fascinate filmmakers past, present, and, I'm certain of this, future. So what do we make of the ones that came before? After the jump, we take a closer look at the Original Screenplay nominees of 1982...

Diner
Barry Levinson
***
IMDb Synopsis: A group of college-age buddies struggle with their impending passage into adulthood in 1959 Baltimore.

An ensemble piece, more observational than plot-driven, dialogue-heavy. The relationships are the story, and certainly the patter and the rhythm and the references they make - sometimes explained, sometimes not - ring with the authenticity of a lifelong friendship. Pops in, stays for a couple hours, gets out, and manages to bring out fully-realized people while doing so. 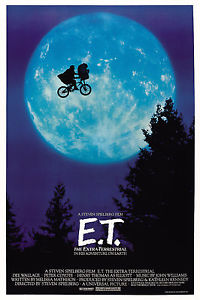 E.T. the Extra-Terrestrial
Melissa Mathison
***
IMDb Synopsis: A troubled child summons the courage to help a friendly alien escape Earth and return to his homeworld.

The connection between Elliott and E.T. is vividly and inventively portrayed. Love that there's no villain - even the supposed threat of government agent "Keys" is explained as a matured, different form of Elliott's own awe of the unknown. Most characters outside Elliot are clearly less valued: the brother's friends get atrocious dialogue, Elliot's female classmate is an afterthought, and Mom is sketchily-written. 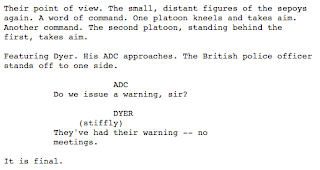 Gandhi
John Briley
****
IMDb Synopsis: Gandhi's character is fully explained as a man of nonviolence. Through his patience, he is able to drive the British out of the subcontinent.

It does not completely avoid the usual biopic issues (over-simplification, deification, plot as a series of checkpoints), but it does attempt to understand the Mahatma as a person: stubborn, sometimes impractical, and often buying into his own press but also dedicated, wise, and strong-willed. I wish it delved into his exploration of India or his two-year imprisonment, but even the film via title card admits it's impossible to include everything. Impressive as it stands.

An Officer and a Gentleman
Douglas Day Stewart
****
IMDb Synopsis: A young man must complete his work at a Navy Officer Candidate School to become an aviator, with the help of a tough Gunnery Sergeant and his new girlfriend.

That perfect Screenplay 101 structure, full of Arcs and Themes unsubtly conveyed, yet not overplayed, either. Every character is given a full life. The central romance has enough breathing room to develop beautifully, realistically. One actor who passed compared it to a 1950s film; it is, and unapologetically so, and that's probably its strongest trait.

Tootsie
Larry Gelbart & Murray Schisgal
story by Don McGuire and Larry Gelbart
*****
IMDb Synopsis: Michael Dorsey, an unsuccessful actor, disguises himself as a woman in order to get a role on a trashy hospital soap.

Superbly crafted, every pitfall sidestepped. What could have been a condescending take on gender dynamics instead becomes profound, hilarious, and surprisingly heartwarming. Even the love story, which could have been predatory and off-putting, is genuinely romantic, sexy. Michael's selfishness and sexism are fully embraced; his arc is not one of complete redemption, but a step in the right direction.

Gandhi's John Briley won the Oscar, but if I had a say-so, my vote would go to...