The music branch of the Academy seems to be the most insular, exclusive group. Like every category, there's usually one newcomer a year, but the rest of the nominees tend to have an unusually high tally of previous nods. The record for most Academy Award nominations is held by a composer, and soon it will become clear who (as if you didn't already know!).

Welcome to the Club - My goodness, they actually let some "new" blood in, and look who it is: Ravi Shankar and George Fenton sharing a nom in 1982 (Fenton would return), Jonny Greenwood in 2017 (and I should mention, Shankar and Greenwood are both best-known around the world as popular music figures)

Old Friend - Prolific, but not in the double-digits yet, and a winner who keeps doing great work: Marvin Hamlisch in 1982 (he had two wins in one year) and Alexandre Desplat in 2017 (recently won for The Grand Budapest Hotel)

John Williams - You can't get rid of him! Fifty-one nominations total, 46 in scoring alone, most recently 2017's The Last Jedi! 1982's E.T. the Extra-Terrestrial got him his fourth Oscar (he has five).

Let our ears feast upon their work, after the jump......

An Officer and a Gentleman
Jack Nitzsche
****

And, for the first time this edition, Oscar and I have to agree! My vote goes to.... 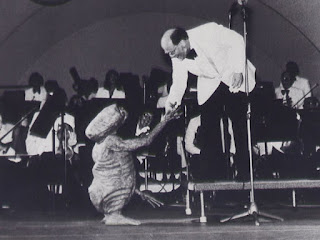 JOHN WILLIAMS
for
E.T. THE EXTRA-TERRESTRIAL


Tomorrow, the nominees for Best Actor: Dustin Hoffman in Tootsie, Ben Kingsley in Gandhi, Jack Lemmon in Missing, Paul Newman in The Verdict and Peter O'Toole in My Favorite Year.