Cinema '68: Gays Upon My Works

In 1959, Sam Spiegel's adaptation of Tennessee Williams' Suddenly, Last Summer gave mainstream audiences a good look at homosexuals in the guise of Sebastian Venable, a never-seen, demonic figure who uses the women in his family to "procure" young men desperate for money, using them up before moving on to a new location, a new set of victims. Yeesh. By the 1960s, the Motion Picture Code was loosening up to allow more frank depictions of homosexuality on screen, though the MPAA still chafed at any depictions that ennobled or normalized such people. As Vito Russo says in The Celluloid Closet, "Homosexuality had come out of the closet and into the shadows, where it would remain for the better part of two decades. In the 1960s, lesbians and gay men were pathological, predatory and dangerous; villains and fools, but never heroes. It was sideshow time." 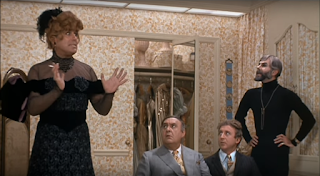 Among the titles Russo calls out in his next paragraph: The Producers, a story of Broadway musical theatre with only two (2) gay characters, treated as aberrations by the titular anti-heroes played by Zero Mostel and Gene Wilder. Russo names it among the many films in which "fear, hiding and self-destruction" are the hallmarks of the homosexual, but I don't think that's fair. Roger De Bris and Carmen Ghia may not have good taste, but they are fearlessly themselves, their ineptness separate from their identity. Remember: Bialystock and Bloom may be the leads, but they are also amoral hucksters exploiting starry-eyed optimists and desperate artists to enrich themselves. Brooks may eviscerate them as artists, but he treats Roger and Carmen with dignity.

Dignity is denied the gays in Lady in Cement, the second film to star Frank Sinatra as Miami gumshoe Tony Rome. During his investigation into the death of a beautiful blonde found with cement shoes in the ocean, Rome manages to fell a gay former NFL-er with one blow, humiliate a wise-ass faggot who runs a girly bar, and pointedly lisp and wave his fingers at a nancy-boy mortician who wants the underground craps game in his funeral parlor to be a little less rowdy! The movie's hostility towards the gay community is unnecessary; to make matters worse, it's a totally flat mystery - the writing, the photography, the editing, the performances. They give me nothing!

Lady in Cement's treatment of gays is especially mystifying when compared to another Sinatra mystery, The Detective. Sinatra plays moralistic New York detective Joe Leland, investigating the horrific murder of a gay man. Leland isn't going to march in any Pride parade, and he certainly doesn't have any gay friends, but he's more willing to treat them as people than his peers are - still, his own ambition and prejudices allow him to tow the party line...with disastrous results. Full of thrilling twists and turns that expose corruption at all levels (but of course), The Detective climaxes with a denouement clearly decrying "normal" society's mistreatment of "others" - the gay, the poor, the mentally ill - driving them into darkness and death. 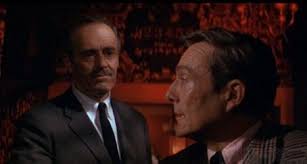 Gays also turn up as suspects in the true-life murders depicted in the chilling The Boston Strangler - well, one at any rate: a fey Hurd Hatfield, cornered by investigator Henry Fonda after his lesbian landlady and her girlfriend accuse him of being the killer. Their discussion criticizes the demonization of LGBTQ people; it was only a matter of time before the police started blaming them for sex crimes. Ah, but he is one of only a slew of "sexual deviants" grilled by cops in a surprisingly funny middle section. It's not 'til much later that we meet Albert De Salvo, a family man apparently unaware that he has an alternate personality who assaults and murders women. Tony Curtis is brilliant, sickening, exhausting in the best way in the part.

The biggest role for a gay male character this year was...well, probably The Sergeant, but I didn't see that. I did see Star!, however,  re-teaming of The Sound of Music's director Robert Wise and star Julie Andrews about the life of Gertrude Lawrence. Shockingly tedious and un-illuminating, it comes alive in scenes featuring her fairy godmother - Noël Coward, played by Daniel Massey in a performance good enough for an Oscar nod. Deservedly! He is the only thing that shines in an otherwise dull film, even if Coward is written as basically asexual. Massey hints, he winks, he acknowledges what the script cannot, all to his credit.

The real Noël Coward could be seen in Boom!, an adaptation of Tennessee Williams' The Milk Train Doesn't Stop Here Anymore starring Elizabeth Taylor and a miscast Richard Burton. Coward's performance as the Witch of Capri (mmhm) is an extended cameo, filling in Taylor's ridiculously wealthy recluse on the backstory of Burton's mysterious poet. As he does so, she wears a Chinese opera-inspired headdress that out-camps him. Frankly, I barely remember him doing anything more than looking smugly at Liz. She, meanwhile, cannibalizes the scenery and everyone within it without sacrificing an iota of verisimilitude. I believe her and she's outrageous! I wish her movie was more exciting! 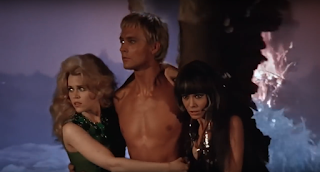 If you're worried about Elizabeth Taylor being the only female representative of gay appeal, fear not! Prime Jane Fonda soars through the galaxy as Barbarella, right into the lusty hands of lesbian space queen the Great Tyrant. Anita Pallenberg plays the role on-screen, but there's no mistaking the plummy voice of Joan Greenwood dubbing over her: only she could give the oft-repeated "my pretty-pretty" its perfectly feline intonation. Barbarella's hint of lesbianism is very much a man's version of it - Fonda's husband Roger Vadim directed it - but the fantasy designs, groovy soundtrack, and concepts such as the Excessive Machine (death by sexual exhaustion!), the Essence of Man hookah, and John Phillip Law as Pygar make for perfect, if imperfectly queer, camp. 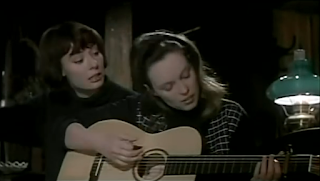 Imperfectly queer is a pretty good description of the Oscar-nominated The Fox...to say the least. Sandy Dennis and Anne Heywood are best friends who live on a farm together, even share a bed, but it's not until Keir Dullea shows up and makes moves on Anne that they realize what this "friendship" actually is. Beautifully shot by William Fraker, sensitively performed by the ensemble, The Fox had the potential to be a thoughtful examination of late awakening, a celebration of true love. It's all spoiled by a shoddy, tacked-on ending that violently reinforces hetero values.

Heartbreak is also in the cards for The Killing of Sister George, but at least that makes sense under the circumstances. Beryl Reid is a butch actress whose TV role is about to be killed off; Susannah York is her girlfriend whose fixation on dolls and childish clothes belie her actual age; Coral Browne is a BBC exec who treats Reid professionally and York...very warmly. A frank depiction of gay women that yanks in places where the source play merely tugged, getting deeper into the sub-dom acts between Reid and York, introducing other "outsider" friends of theirs, filming in an actual lesbian bar with actual lesbian patrons, and changing the climactic seduction scene from vague hugging to in the bedroom, top off, nipple-licking SEX. Your mileage may vary when it comes to Reid's loud, garish performance, but it certainly helps the impression that her unhappiness is not caused by being a lesbian, but by her being a lot. 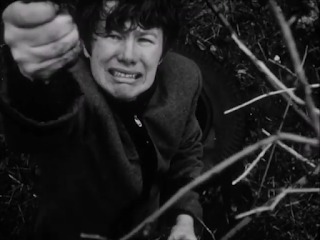 Speaking of a lot! Seeds is the masterwork of New York madman Andy Milligan. Jimmy McDonough's indispensable The Ghastly One: The Sex-Gore Netherworld of Filmmaker Andy Milligan calls it "his Magnificent Ambersons" - a drama about a family gathering together for the holidays and bringing back old secrets...and a lot of incest! There is nothing optimistic about Seeds, no good people, no moral, just ugliness, from the wheelchair-bound, alcoholic mother to the baby-voiced fuckbuddy siblings to the priest with a secret mistress to the suicidal West Point cadet expelled for his gay relationship (he even brings a boyfriend with him to dinner, though he's barely seen and you wouldn't know the relationship if you didn't do some research). Infamously working with tail-ends of used film stock, Milligan's movies tend to look like a better-left-buried secret unearthed - turns out, that's the perfect aesthetic for this kind of subject matter! Seeds is the furious, spittle-fueled work of a queer artist who has seen it all and has nothing good to say about any of it. Truly, a masterpiece.

Email ThisBlogThis!Share to TwitterShare to FacebookShare to Pinterest
Labels: 1968, Barbarella, Boom!, Lady in Cement, reviews, Seeds, Star!, The Boston Strangler, The Detective, The Fox, The Killing of Sister George, The Producers