Here 'tis - my Top Ten Films of 1968! Honorable Mentions: The Boston Strangler, Bullitt, Buona Sera, Mrs. Campbell, The Detective, The Fixer, Funny Girl, Hell in the Pacific and Hour of the Wolf. 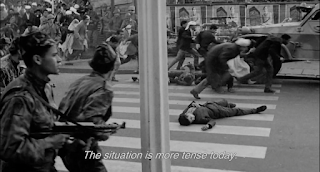 
Much like my first viewings of Z (can't wait to revisit that next month) and 1987: When the Day Comes (my pick for 2017's Best Picture), The Battle of Algiers electrified me with its sweeping ensemble, tense action sequences, and the cat-and-mouse game played between the urban guerrilla forces and the forces of the occupying government. No one gets off scot-free: revolution is a messy, bloody business, with innocents slaughtered on all sides. And yet! This is decidely not a both sides appeasement - the condemnation of the occupying forces whose presence necessitates deadly action by people who want to be free is clear as crystal.

The remaining nine, after the jump... 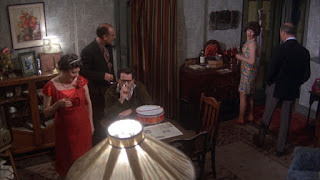 
I know there are deeper meanings within the surface plot, wherein a man with a shady past is suddenly confronted by two threatening strangers at a seaside boarding house. There are asides about Jewish identity, non sequiturs about teeth, and a disagreement over whether or not the birthday party of the title is even a birthday party. Absurdism? Allegory? A commentary on the threat of conformity? An elegy for things past? Whatever it is, I found it terrifying and unforgettable. 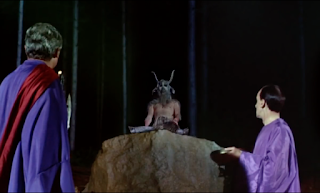 
What a relief to find it holds up after - what, ten years? A Satanic coven flick that depends not on paranoia, but on strong will and pure faith - the Devil is real, we know that; how do we fight his influence, save our loved ones from pursuing Evil? And when I say evil, I mean it: the Fourth Horseman, the Goat of Mendes, Charles Gray's deliciously evil Mocata, etc. Christopher Lee plays the dashing hero this time around, one of his best performances; Sarah Lawson, surprisingly, nearly steals the show as a family friend who gets caught up in all the mishegas.


An improvement on the original stage play, coarsening its edges and speaking into existence the words and deeds only coyly hinted at. Beryl Reid's performance, as I've said, may be the sticking point - I change my mind about it every day - but the movie overall is a refreshingly unique, wickedly funny, ultimately sympathetic tale about the panic that comes when it seems your usefulness is nearing its end - both personally and professionally. Seamlessly opened up to include various bars, television studios, a prostitute neighbor, and the real-life London lesbian club Gateways, Sister George gives us a direct look at queer spaces and every side of the closet - glass and otherwise - without making a anthropological study of it. It just...is. And that's wonderful.


Samurai are not heroes, but barbarians, mercenaries using war as an excuse to brutalize women - to the victor go the spoils, and all that. Vengeful spirits find themselves at a crossroads when their vow to spill samurai blood winds up affecting the one person they did not think they'd grapple with - we love a tale where the haunters must wrestle with post-mortem morality! And then we have the man who must himself decide whether to act on duty, vengeance, or mercy. Shindô takes a look at his country's folklore, traditions, heroes and villains, and finds a history of tragedy begat by pride. 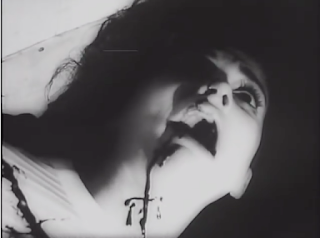 
As effective today as it was when I caught it on our local PBS in fifth grade - more so, even, now that I can see every detail clearly thanks to the Criterion remaster. In its brief running time, Romero and Russo present a shockingly violent, claustrophobic chiller, populated by recognizable people - not characters, people - from the heroic (but not always right) Ben to the frustrated Helen to the shit-kicker sheriff ("They're dead, they're all messed up"). A commentary on Americans' predilection for violence, too - doesn't the posse seem too thrilled to be shooting down former neighbors and relatives? 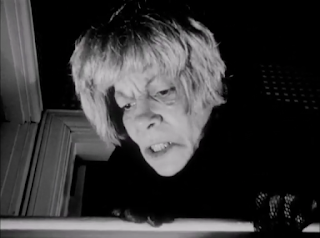 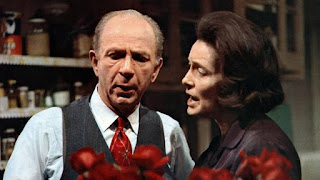 
A son returns home from war a man - not because of any violence, but because he left home and experienced the world. Something Mom didn't do, regrets not doing; she looks back at the sacrifices she made that no one else appreciates, at the affection (perhaps too much?) she put into raising a boy only to see him draw away, at the marriage she honored in deed if not in thought - what was it all for? Dad's not much better: he can only respect his son if he can drink with him, tell bawdy jokes, enter battle; he's tired of being taken for granted, of the bad coffee, of the promised life that slipped away. And Son is caught in the middle, trying to decide who's to blame. They're all seeing each other for the first time as people. I loved it.


Overwhelming! Eight hours. A cast of thousands. Three large-scale battle sequences, two of them taking up the entire runtime of Part Three. And through it all, a film about people, about their passions and temptations, about what they're willing to fight for, die for; who they're willing to help, to love, to befriend; and how they express all of that in...well, in war and peace. The Burning of Moscow sees your Burning of Atlanta and ups it with a constant barrage of ashes and explosions. And for those of us whose previous acquaintance with this story is Natasha, Pierre and the Great Comet of 1812, rest assured the climax of that scenario (Part Two) is just as effective as you'd hope. Jesus, it's all just as effective as you'd hope.


Joie de vivre personified. Demy's beautiful follow-up to The Umbrellas of Cherbourg is more of your typical musical - book scenes, dance numbers, a more fanciful/optimistic tone. Once again, the ensemble is mostly dubbed by other singers - even known musical stars Gene Kelly and George Chakiris - but you could hardly tell, so committed are the lip-syncs. A full-hearted valentine to Love! Fate! Musique!

The full roster of films screened, a total of 67:


2001: A Space Odyssey
Barbarella
The Battle of Algiers
The Birthday Party
Boom!
The Boston Strangler
The Bride Wore Black
The Brotherhood
Bullitt
Buona Sera, Mrs. Campbell
Bye Bye Braverman
Charlie Bubbles
Charly
Chitty Chitty Bang Bang
Countdown
The Detective
The Devil Rides Out
Faces
Finders Keepers, Lovers Weepers
Finian's Rainbow
The Fixer
For Love of Ivy
The Fox
Funny Girl
Head
The Heart is a Lonely Hunter
Hell in the Pacific
Hellfighters
Hot Millions
Hour of the Wolf
I Love You, Alice B. Toklas!
Ice Station Zebra
In Hot Blood
Isadora
Just for the Hell of It
The Killing of Sister George
Kuroneko
Lady in Cement
The Lion in Winter
Night of the Living Dead
The Odd Couple
Oliver!
Petulia
Planet of the Apes
Pretty Poison
The Producers
Rachel, Rachel
Romeo and Juliet
Rosemary's Baby
The Scalphunters
Seeds
Shame
She-Devils on Wheels
The Shoes of the Fisherman
Skidoo
Star!
The Subject Was Roses
A Sweet Sickness
The Thomas Crown Affair
Uptight
Vixen!
War and Peace
Wild in the Streets
Witchfinder General
Yellow Submarine
The Young Girls of Rochefort
Yours, Mine and Ours

Email ThisBlogThis!Share to TwitterShare to FacebookShare to Pinterest
Labels: 1968, Kuroneko, Night of the Living Dead, Seeds, The Battle of Algiers, The Birthday Party, The Devil Rides Out, The Killing of Sister George, The Subject Was Roses, The Young Girls of Rochefort, War and Peace