Although the Academy had been honoring supporting actors and actresses since 1936, other awards bodies were slower on the uptake. The Golden Globes followed the Academy's example from its very first ceremony, launched in 1943, but it took the National Board of Review another 11 years to do the same. The BAFTA Awards had no such category until 1968, but they had divided their acting categories between "British" and "Foreign" anyway, with a mix of lead and supporting performances in both; the NYFCC Awards had no supporting awards until its 35th ceremony in 1969.

So I don't quite know how they charted buzz or "surprises" back in 1956. What I do know is, of the five eventual Best Supporting Actor Oscar nominees, only one had been cited by another major awards body. So it makes sense that he was the one who won the Oscar: 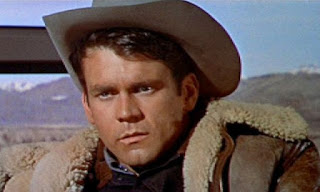 He's charming and irritating, a ball of unbridled energy. He looks like a man, acts like a boy, and that can be both titillating and frightening: there's a hint of danger in his devotion. Sometimes I wanted him off the screen, other times I couldn't look away. In other words, Murray plays the part perfectly. Indeed, my only issue is the category: he's the lead, opening and closing the film. I ding a star for that. 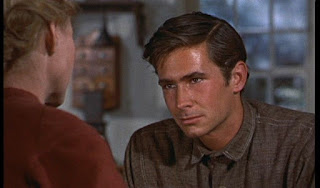 Such a sweet, awkward boy, his inner conflicts painfully obvious in every expression, every tight physical movement. His best moments are in the latter half, telling his parents that he wants to fight in the war, despite their Quaker beliefs, then actually going to fight and sobbing while he fires his gun. It's a performance that promises a great career, but a nomination?

Enters as the Breath of Fresh Air, different from Van Gogh because he's organized in his work but messy in his hobbies - he wants to fight and fuck and yell. It's good, exactly what it needs to be. It doesn't need to dig that deep - the film, after all, is about Van Gogh - and it's the kind of showy performance that Oscar voters go for in this category. I don't dig it, but it's fine. 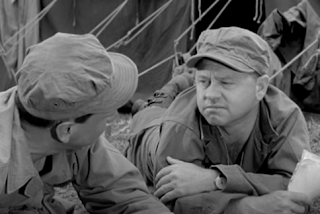 Rapid-fire and unsubtle as he is, Rooney brings his own kind of excited naturalism, an energy that pumps life into his otherwise staid co-stars. Wendell Corey, able and fine, suddenly becomes interesting and spontaneous opposite Rooney's constant interruptions, jokes, self-interested monologuing. His big moment: the big-money craps game during an air raid, the most thrilling scene in the movie. 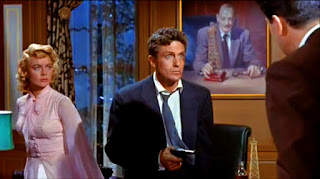 Honestly, I had no idea he had this in him. Charts the tragic arc magnificently, playing every type of drunk - charming, boring, pathetic, frightening - as well as a beautifully-matched romantic interest for Lauren Bacall. Through it all, he makes sure the man-boy is there, sometimes loud and proud, sometimes lingering just beneath the surface. Just dynamite. But is he a co-lead, or a supporting character in Rock Hudson's story? Friends, I say...the latter.

Quinn received his second Oscar, but you don't need to read deeply to see who my vote goes to: 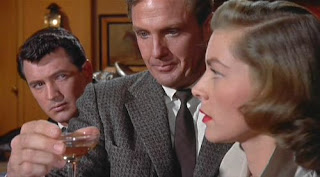 ROBERT STACK
for
WRITTEN ON THE WIND


Tomorrow, the nominees for Best Director: Michael Anderson (Around the World in Eighty Days), Walter Lang (The King and I), George Stevens (Giant), King Vidor (War and Peace) and William Wyler (Friendly Persuasion).