It's easy to underestimate just how prolific the musical genre was pre-1970s. Nowadays, we get a Disney movie, maybe a stage adaptation of a Broadway hit, every once in a blue moon an original like The Greatest Showman, and it's enough to make us go, "wow! The musical is back!"

But man, the way the studios just pumped these babies out in the '50s! The volume! The variety! Enough so that there sub-genres within sub-genres: jukebox musicals, bandleader bios, remakes of non-musical hits, ballets - all in addition to the standard Broadway adaptations, even re-workings of past stage hits (Anything Goes, for example, completely rewrites a book that had already been re-written). And how do I even categorize something like The Girl Can't Help It? Showcase musical?

Anyway, there are over a dozen musical or musical-adjacent films from 1956. These are the five that were nominated for their score:

An enjoyable romp through the songs of De Sylva, Brown and Henderson, presented on ukulele, full orchestra, gramophone, music box; via an Al Jolson impression, a gangster ballet, a standard chorus line. Creative, delightful, effective, from the opening rendition of the title tune all the way to the closing rendition of that same tune. What a way to take music that everyone knows, from a different time, and both pay proper tribute and revitalize it.

Oh gosh, how sublime. Haunting and romantic and frivolous, intimate and uproarious. You hear Duchin's sound develop, how he connects to people and life events through his music. It's quite marvelous.

A grand showcase for Porter songs. Romantic with its various arrangements of "True Love", playful with its underscoring via "Who Wants to Be a Millionaire", both when it comes to "I Love You, Samantha," and in the case of "Well, Did You Evah," creates a terrific new version that fits comfortably into the milieu of the new film.

The King and I
Alfred Newman / Ken Darby
adapting the music of Richard Rodgers
*****
eighth of nine wins, 36th of 42 nominations for Newman; first of three wins, first of six nominations for Darby

I'm not about to argue the genius of Richard Rodgers in any form, sorryyyyyyy!

No matter how much this movie tries to make "My Lucky Charm" or "The Gal with the Yaller Shoes" or even "If You Can Dream" happen, they just don't have that zing, you know? You shouldn't be thinking, "I wish they'd get this number over with already" during a musical! The one standout: Sammy Davis, Jr.'s version of "Frankie & Johnny." Just electric, man.

Oscar awarded Best Picture nominee The King and I:


But I guess I have a slight bias in favor of a musical score that has more obvious work to do for a film, because my vote goes to: 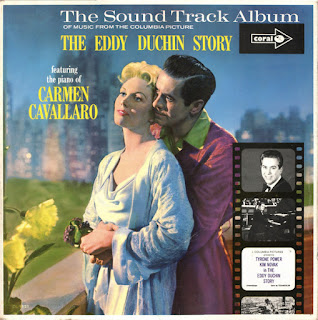 Tomorrow, the nominees for Best Actress in a Leading Role: Ingrid Bergman (Anastasia), Carroll Baker (Baby Doll), Katharine Hepburn (The Rainmaker), Nancy Kelly (The Bad Seed) and Deborah Kerr (The King and I).

Email ThisBlogThis!Share to TwitterShare to FacebookShare to Pinterest
Labels: 1956, High Society, Meet Me in Las Vegas, Oscars, The Best Things in Life Are Free, The Eddy Duchin Story, The King and I