I went back and forth trying to decide what to do with High Society. Oh, not the 1956 Cole Porter musical remaking The Philadelphia Story, of course, but the 1955 Bowery Boys comedy about estate fraud and murder - the first and only film of the series to be nominated for an Academy Award. 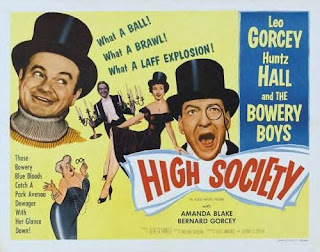 The Bowery Boys and Oscar seems - then and now - to be an unlikely mix. After all, High Society (which, despite its release year, still qualified for 1956 due its LA release being delayed) was the 37th entry in the prolific comedy series. By the time the nominations were announced, another six were already out. Their parent studio wasn't of the big leagues, but one of the "poverty row" studios, Monogram Pictures. The closest they had ever come to the Oscars stage was way back in 1937, when they were still members of the Dead End Kids, making their debut as supporting players in Best Picture nominee Dead End. Several studios and contract negotiations later, here they were....

The series is not highbrow. The filmmaking is not particularly exceptional. They're consistent, sometimes funny, if you like that sort of thing. So it was quite a surprise for everyone when High Society was named among the nominees for Best Motion Picture Story - once everyone realized the mistake, that is. Even the writers, Edward Bernds and Elwood Ullman, admitted publicly that the intention of the nominating committee was clearly to honor the aforementioned Porter musical, a hit for MGM and the final film role for the new Princess of Monaco Grace Kelly. Naturally, as that High Society was based on The Philadelphia Story, it was ineligible for this category anyway (though, Broken Lance won this category two years previously despite being a western remake of House of Strangers). Nevertheless, the Bowery Boys writers declined the nomination, and it did not appear on the final ballot - even the official website for the Academy Awards does not include it. 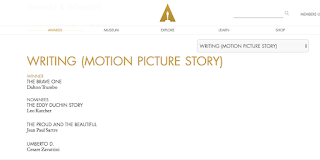 And - though I did watch the movie, and come away with an overall agnostic attitude towards it - nor do I:

The Brave One
Dalton Trumbo (fronted by Robert Rich)
***
past winner, third and final nomination

The story of a boy and his bull. Simple and ultimately effective, though the steps to get to the final resolution are needlessly complex and fanciful. Still, in the end, it's a sweet loving-your-pets tale, and who, I ask, can object to that?

The Eddy Duchin Story
Leo Katcher
****
first and only nomination

You think it's the story of a bandleader and his wife (shades of The Glenn Miller Story), but no! It's about a man running from his grief - and his son! - until he learns that life and love must be held on to while we still have it! A not very challenging or revolutionary arc, but wisely executed, with a great feel for the huge impact small moments have.

Two very different people make an unexpected connection during an epidemic in a small Mexican town. A tale of sweat and vice, resurrection and reformation, lust and love. I love it. That being said, it's a bit iffy as far as qualifying goes - Sartre's Typhus is largely credited as the inspiration, and while it's been characterized as a treatment that had gone unproduced, going by the film's credits, it looks like a short story. Sartre himself apparently denied authorship as far as the film was concerned. Tough call.

A study of one individual's struggle becomes, more and more, the story of a relationship that offers hope and saves lives. It always was that story, of course, but you don't realize until the end just how beautifully Zavattini planned it, from the moment one pensioner snaps for the dog to be kept quiet, through the runaway sequence, all the way to the final frame. I'm puzzled as to why it's here instead of Original Screenplay, since Zavattini is also the sole credited screenwriter and it's heaps better than the abysmal Julie.

The Oscar went to Robert Rich, the front for the blacklisted writer Dalton Trumbo, the second time he won an Oscar without "winning" an Oscar:


But boy howdy, what an odd lineup. I can only look at four nominees, and of those, half fall into a weird grey area as far as qualifying goes. I can't help thinking it was this hodgepodge of confusion and errors that led to this category being completely eliminated the next year, the writing categories simplified between Original and Adapted (of course, as we've learned through the years, even that clear demarcation can be...massaged, shall we say?).

But of these choices, if I were voting, and considering that just this year I considered Shadow adapted even though it's from an un-produced screenplay, I must go with: