Every Oscar year begins the year before. Colin Firth's Oscar win for The King's Speech starts the minute Jeff Bridges' vehicle Crazy Heart gets a release date; the backlash over Green Book lays the groundwork for the outside-the-box Parasite; and the 1956 slate of nominees - epic in scope and length, big at the box office, based on great works from Jules Verne to Moses - was almost pre-ordained by the near-sweep of 1955's Marty, a humble dramedy based on a teleplay.

At 90 minutes, Marty still stands as the shortest film to win Best Picture. By contrast, the shortest Best Picture nominee for 1956 was Friendly Persuasion at 137 minutes; of the others, three of them - Around the World in Eighty Days, Giant, The Ten Commandments - run over three hours! Movies were an event again, something the industry needed to compete with the increasing threat of television. There is a noticeable deluge of films shot in Cinemascope, VistaVision, Cinemascope 55; bold proclamations of the brighter, more realistic color of Eastman and Deluxe: for the first time, all five Best Picture nominees were full-color productions.

And those nominees were:

Around the World in Eighty Days
Mike Todd, producer
***
first and only nomination; Golden Globe winner for Best Picture - Drama, National Board of Review - Best Film of the Year, NYFCC Awards winner for Best Film

The epic treatment given this adventure-comedy seems appropriate, but for every good decision, a bad one is made. David Niven, Cantinflas, and Robert Newton are a hoot together; the Spain sequence an exciting showcase of dancing and bullfighting; a sharp, witty screenplay that suits the material comfortably. And yet: Shirley MacLaine would be wasted were she not already miscast; the Asian sequences seem at a loss when having to incorporate non-westerners (Peter Lorre avoiding articles does not a Chinese national make!); the American sequence is so over-stuffed with pointless cameos, the novelty becomes an annoyance. I think three hours is a bit long for a lark.

While it is not necessarily a given that an episodic film will be uneven, there is definitely a stop-start to this film's momentum that prevents me from fully embracing it. Not to say it's bad: the characters are distinctly written, vividly performed (Gary Cooper and Dorothy McGuire especially - sensitive, sensual, warm portrayals); the tensions between Quaker beliefs and the war are present throughout every scene, even if not directly referred to; the goose is a delight. But it drags something awful - two hours and seventeen minutes that go by like four hours.

Folks, these three hours just flew by! Everything about it is sublime: the spiritual score that gives way to Texas tributes, the time lapses told through the growth of an oil well, the shot of James Dean drunk at the dais, the solid clink of Mercedes McCambridge's spurs as she stalks around Our Liz, Rock Hudson's aging into a silver fox. It never feels grandiose, despite its length and scope; no, by the end, you see it's the story of an American Dream, of establishing your legacy and keeping it going - and of family, exasperating, imperfect, wonderful family. I loved it!

The King and I
Charles Brackett, producer
****
second of two nominations in this category; Golden Globe winner for Best Picture - Musical / Comedy, National Board of Review's Top Ten Films of 1956

It really is a delightful film for the most part, despite its truncated feel - I wanted more Lady Thiang, more Lun Tha and Tuptim, and the ending felt so sudden! But I can't dismiss it: Kerr and Brynner are electric together, the music is great, and I enjoy a film that finds conflicts but no villains. The "Small House of Uncle Thomas" is a standout. I guess my biggest gripe is that isn't longer, that I didn't get to spend more time with these characters, which, I think, is a testament to the film's quality. After all, I wouldn't want more of a boring, un-involving movie.

I first saw this movie when I was six years old; it is just as magical to be today as it was then. The scale - the extras, the sets, the costumes, the effects - it's crazy! Detailed! The performances - not over-the-top, but Shakespearian; they may be big, but they are sincere, all of a consistent style. The writing - often repetitive, yes, but overall, an effective dramatization of the Bible that gives thought and weight to the POV's of the Egyptians, the Hebrews, the weak and the strong, the Chosen and the secular. The scale - my God, when you hear it's the most expensive film made up to that time, you believe it, every penny is up on that screen. It's everything I want in a movie.

The Oscar went to Around the World in Eighty Days:


Me, I had a tough time trying to decide between an old love and a new one. So I made my top ten films of the year. Listed them in order. And even that kept switching. So, tomorrow, I may say something completely different. Today, I say: 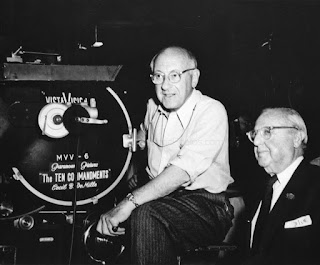 THE TEN COMMANDMENTS
produced by
CECIL B. DeMILLE