If you've talked to anyone who was following the 1992 Oscar race, you will hear an oft-told urban legend about how Supporting Actress shook out.

Basically, going into the Oscars, this was a three-woman race between Judy Davis (the ninth of sixteen actors nominated for a woody Allen film), Joan Plowright (never nominated veteran and widow of Laurence Olivier) and Miranda Richardson (the critics' darling). Looking back at Inside Oscar's account and contemporaneous sources, Richardson was the favorite, not just for delivering a killer monologue à la Network's Beatrice Straight, but for also having central roles in sleeper hits Enchanted April and The Crying Game. Smart money was on Davis or Richardson; I know one person who put money on Plowright; and of the two "surprise" nominees, Vanessa Redgrave would be the obvious spoiler pick.

No one saw it coming:


You can hear the screams! It's one of Oscar night's biggest shockers, and immediately gave rise to a number of theories.

The most prevalent one purports that Jack Palance, that doddering old fool, read the wrong name. The Academy, not wanting to start the night by embarrassing an elder statesman of Hollywood, let it slide. That's not how the Oscars work, and if you think it does, then you somehow missed the time Moonlight won Best Picture while the La La Land producers were giving their acceptance speeches - there are measures put in place to prevent it, starting with the damn envelope. But you don't even need to get into the 2016 Oscars to see why the Palance theory doesn't work: just watch the clip! Having told the TelePrompTer to take a hike, less he be distracted, he takes his time reading the card, making sure he gets it right. People have also said he was going off of the memory of the last time he read aloud, but you're telling me Jack Palance isn't aware of Joan Plowright or Vanessa Redgrave?

Even those who accepted that it was the right name had a horrid little theory: it must be because Tomei was the only American nominated - Palance himself points this out before he reads the name - and in a xenophobic fit of solidarity, conferred the honor on her rather than these upstart Brits (well, and Aussie Davis). It's a bizarre theory that flies in the face of both the Academy's international membership ranks and its willingness to award the British. Hedda Hopper used to write op-eds about it. Redgrave herself was a previous winner! That very evening, Emma Thompson won Best Actress. That dog don't hunt.

Finally, there comes the "crotch vote" theory, which is very simple: the mostly male membership voted for Tomei because she was the most fuckable. She's the youngest nominee, undeniably beautiful, and while her character, Mona Lisa Vito, may have a smart mouth, she stands by her man...who just happen to be twice her age. She's not the cold ball-buster Davis plays, nor the cheated-upon housewife portrayed by Richardson, and she's certainly not Plowright or Redgrave.

The theories are not nice, and speak more to the gatekeeping of how we define "An Oscar Movie" than anything else, a gatekeeping that has made certain Oscar ceremonies seem more medicinal than celebratory. Still...if one actually takes the time to sit and watch the performances, did she deserve the win? 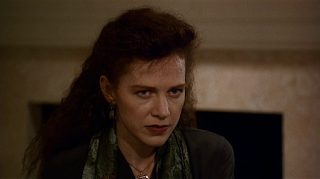 Davis is one of Allen's greatest collaborators: she doesn't just get the material, she delivers it without sounding like a Woody Allen character. Her volcanic explosion on the phone during a date; her casual, caustic dismissal of everything from design to opera; the unexpectedly carnivorous way she announces she's OK being single. She's constantly challenging us, even if she never gives off that sensual vibe that seems to be drawing these men to her. 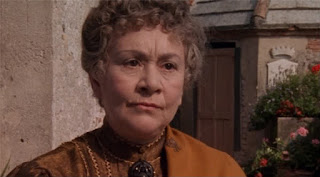 I like her as the fussy widow who wants to keep everything, even her vacation, on a set schedule. I like her as the free-spirited woman enjoying her time and new friends in this enchanted castle, chuckling and giggling girlishly. They aren't deep performances, but they get the job done. I just don't know when that change took place - aside from one voiceover, she gives us no hint, no transition. It just...happens.

There is a magnetic mystique about Ruth's fogginess - almost as though she would disappear through your fingers if you held her too tight. In Redgrave's hands, we witness the struggle for her to get her thoughts out - she seems almost embarrassed, outclassed by such unfamiliar folk as the Schlegels. But when she speaks of Howards End, there is nothing dotty or vague, and one can almost see life being brought back to her, a new energy, a rejuvenation, as she discusses it with Margaret. A fleeting, unforgettable performance. 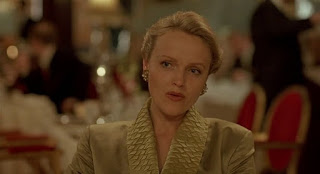 Does well with the role: more than just her third-act speeches, delivered in tear-streaked fury, she sets up throughout a mother's concern about her son's new girl, as well as a certain well-bred expectation for how things should be. And yet. As you watch, there's no getting around the fact that she is about 15 years too young for this role. Doesn't effect her performance at all, it's just hard to get past when her "son" is Rupert Graves. 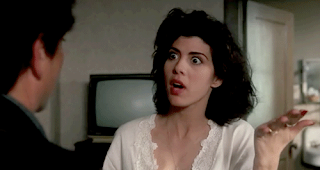 She is not a symbol. She is not a plot point. She is not a one-scene wonder. Mona Lisa Vito is a full human being with expectations (marriage!), expertise (cars!), and frustrations (Vinny!). And Tomei...God, Tomei just sings in the part. Her outburst about deer hunting; her mini-logue about her biological clock; her testimony, going from hostile to key witness: Tomei is purposeful in every vowel, shout, finger point, and cocked head. Sexy, hilarious, and, most shockingly, a convincing partner for much, much older Joe Pesci.

I've seen 'em all, and for anyone who does, the choice is obvious. I can't think of any informed argument that would try to claim otherwise. My vote goes to:

MARISA TOMEI
for
MY COUSIN VINNY


Tomorrow, the nominees for Best Picture: The Crying Game, A Few Good Men, Howards End, Scent of a Woman and Unforgiven.