So, we've talked about the Oscar picks of 1992, and what I would have chosen from the nominees. We've discussed the horror offerings of 1992 and my personal Top Seven. Now, having seen 73 films from 1992, I can safely say that this is my Top Ten - with apologies to the almost-made-its: Glengarry Glen Ross, Shadows and Fog and Twin Peaks: Fire Walk with Me. 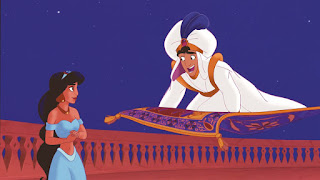 The third film of the Disney Renaissance period, and my goodness, it's no wonder that we remember that period with such fondness! Aladdin's genius in its simplicity: straightforward plotting, no mystery regarding heroes and villains, all done in a breezy 74 minutes. But that is not to say there is no complexity, for here Disney looks at class structures and asks how we can criminalize people we have condemned to desperate poverty? They also present a villain who is, yes, unyielding in his treachery, but who is also deceptively delicious in his humor - honestly, I'd be mad, too, if I was constantly second banana to a guy who can be controlled with a stick. Beautiful songs, a strong heroine, a terrific love story; it has it all! 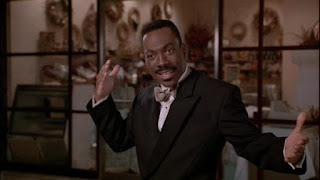 Everything I love about Boomerang is in Act One's big party scene: Grace Jones' iconic entrance, the marvelous shot of our five (marvelously tailored) leads realizing that Eddie Murphy's Marcus is being shoved aside to make way for Robin Givens' Jacqueline. But especially, the conversation between Marcus and Halle Berry's Angela about society's standards regarding masculinity and femininity. It challenges Marcus's macho confidence, which the rest of the movie slowly dismantles. It's a refreshing rebuttal to the transphobic, homophobic, and misogynist jokes he and his friends (and Murphy's characters in his other films!) indulge in. It lays the groundwork for Angela herself, proudly Black, receiving personal satisfaction through public works, who starts as a supporting character but who was always going to be more - she's the one who called him out! How many rom-coms have this much on their minds? 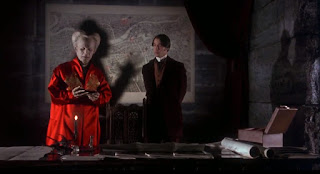 Watching the movie is an extended jaw-drop - the audacity, to get millions of dollars for a Hollywood horror film and make an absolutely bananas art flick about love, fate, and carnal desire. Nothing in this movie is accurate: the clothes don't match the period, dates are incorrect, the sets are impractical and over-the-top, and despite the title, the narrative deviates from Bram Stoker's original novel, centering on Mina Murray as a reincarnation of Dracula's long-ago love whose death prompted his soul-selling descent into vampirism. So what? It all contributes to a mood, to this manifestation of the id. Those awful bustles may be out-of-date, but they set a certain standard from which Mina can open up. Those growls you hear in the background of certain scenes speak both to Dracula's ability to shape-shift into all manner of beast, and to the sexual desire behind vampire legends. And the gigantic diary entries ridden by model trains? Baby, this is opera for the cinema. 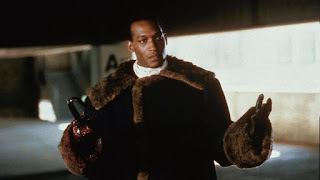 In describing her remake, filmmaker Nia DaCosta recently tweeted that Candyman, "at the intersection of white violence and black pain, is about unwilling martyrs." As in the remake, so it is in the original! The Candyman of the film is a former slave butchered by angry whites who further turned the place of his debasement into a slum where they could funnel the "undesirables" - the Black poor - leaving those people to live with the ferocity of his curse. That was the past; in the present, it's becomes a subject for detached study, salacious curiosity, and possible academic fame for the very white Helen, whose explorations into the origins of this character lead to her own appointment with myth and monstrosity. Candyman is horror at its best: a striking study of exploitation, an intense depiction of the loss of a soul, a condemnation of American society's destruction of the Black community, all infused with gobs and gobs of blood, shit, and bile. 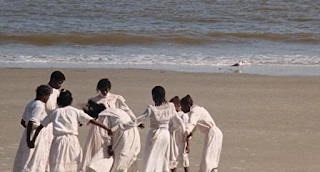 There just aren't a lot of films like Daughters of the Dust. Narrated by an unborn child, equally connected to the POV of the elderly matriarch of a Gullah family born into slavery, full of tensions between generations, genders, sexualities, religions. It is informative but not pedantic, embracing the supernatural without feeling like a fantasy; the supernatural is just as much a part of life as the earthbound. I was reminded of a line from Toni Cade Bambara's The Salt Eaters: "What is happening to the daughters of the yam? Seem like they just don't know how to draw up the powers from the deep like before." Julie Dash and her film are connected to those powers, to generations past, present and future. Just a beautiful, spiritual experience.

Howards End is a perfect film, a beautifully-produced drama about class and the shortcomings of people who try. Merchant-Ivory films aren't fussy: no one is acting, adopting affectations to bring you into the era - people are presented as they are, the mores and wardrobe of the time merely a detail, its timeless relevancy reflected in the rhythm of the scenes, the unexpected sense of humor, the seeming spontaneity of its performances. It's all anchored, of course, by Emma Thompson's strong central performance, a distinctively modern one, but the way Anthony Hopkins covers his eyes when facing truths, or how Helena Bonham-Carter takes a pause to gather her thoughts when challenged, or how Samuel West blinks and stutters when faced with challenges: perfect. 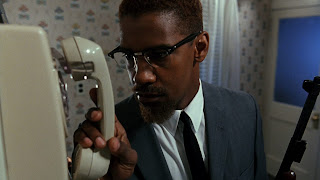 I love epics, the genre that says, "This is important and engaging enough to spend over three hours with!" And gosh, when we're talking Malcolm X, 3hr22min of Denzel Washington making speeches and doing battle with the FBI, NOI and USA seems too short! Biopics are a dime a dozen; many a checklist of events. This film lets us know the subject intimately. How masterfully this film gets us in Malcolm's head, letting us root for him every step of the way, not allowing us to second-guess or regret any his actions until he starts questioning them! Rarely do we get to see every aspect of a film - the performances, the editing, the cinematography - so embedded in the psyche of a character, so dedicated to getting us, the audience, to understand the times through the man. 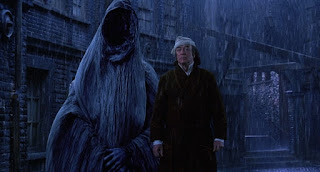 One imagines that the combination of the newly-Jim Henson-less Muppets and Charles Dickens can only be parodical, turning a classic on its head while cynically commodifying a...well, OK, a brand, but one with somewhat more anarchic roots. Not so. Instead, The Muppet Christmas Carol highlights the best of both, identifying their shared appreciation of the common man, the underdog, and their flair for creative use of the English language. Michael Caine's commitment to playing it straight isn't just respectful to all involved, it assures that no matter how much this is Scrooge's story, this is the Muppets' movie, and he stands back to let Gonzo and Kermit and Piggy do their thing. 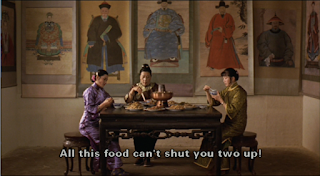 Christ, what women go through. Raise the Red Lantern brings all the backstabbing, manipulation and careful behind-the-scenes plotting of political/court intrigue dramas to the home, shedding a light on the sexism that tradition and society demand - in 1920s China, sure, but not not anywhere else. Obsession, temptation, plural wives, fake pregnancies, death, opera -  Zhang gives you melodrama with a surprising restraint, his ensemble hitting every note with a glance, a pose, or most devastating of all...silence. Gorgeously photographed by Zhao Fei, sublimely acted by leading lady Gong Li, fellow wives He Saifei and Cao Cuifen, and Ma Jingwu, brilliant as the mostly obscured Master. 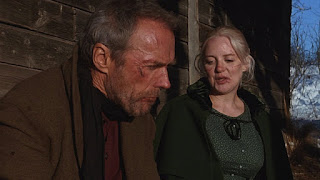 Unforgiven is one of the greatest films about the soul of America. Let's tell it like it is: this is a nation conceived in equal parts violence and self-righteousness, from the legend of Columbus deployed to justify the genocide of Indigenous peoples, all the way to today's killing of unarmed Black and brown people by police. This movie looks at that hardscrabble myth of "justified" violence and says, "This is some shit." Munny and Logan are retired, isolated ranchers, mean motherfuckers back in the day, now considered less-than-men because they hesitate, because they know the cost of killing. Little Bill is the folksy sheriff of a small town, vocally anti-violence, but uses his position to torture anyone who brings trouble, even as he gives mere finger-wags to men who cut up women. You can justify violence, but it's a hell of a thing, killing a man. You can see history as good vs. evil, but deserve's got nothing to do with it. This is how the west was won.