Like Emma Thompson's Best Actress win, Best Supporting Actor was a march towards the inevitable:

The role: A trans woman courted by a lapsed IRA member who, unbeknownst to her, held her boyfriend captive.

Sultry, smart-ass, attuned to Jordan's unique rhythms. He sells some pretty writer-ly dialogue - the name repetitions, the constant questions, every interaction at the bar ("ask him, Col, ask him to ask what I'm drinking") - so that even though you know no one has ever spoken like this, you're confident that Dil absolutely does. And what a lip sync!

The role: A small town sheriff protecting his town from assassins hired to kill two un-prosecuted men who assaulted and cut up the face of a prostitute.

What a treat to watch this performance: low-key and folksy in the beginning, slowly peeling back the layers until you see a man just as ready to kill as any of the hired assassins coming to his town. But his violence isn't mindless; it's methodical, it's sadistic, it's scarring, a warning to others. A magnetic portrayal of coiled-up danger.

The role: Base Commander at Guantanamo Bay, where two soldiers are on trial for the murder of another, possibly under his orders.

A show-stopping performance even before his Big Scene in the last act. Nicholson is frightening, commanding, as a man whose idea of patriotism and service reveals the ugly inevitabilities of a country absolutely fanatical about might. We saw in Easy Rider what he can do with limited screentime; here, he once again proves he doesn't need to be the star to carry a film.

The role: A smooth-talking, profanity-loving salesman.

Hell of an opener, the man-to-man fecal-focused conversation with a potential sale. But he, heh, sells the hell out of it, the expert fisherman reeling 'em in, just some guys talkin'. I think that's what everyone remembers - that and the line, "Who ever told you that you could work with men?" - but I was also struck by his genuine repartee with Shelley Levene. Partly the effects of his own high-riding, but also the mutual understanding between two lifers. The Olivier of the f-bomb. 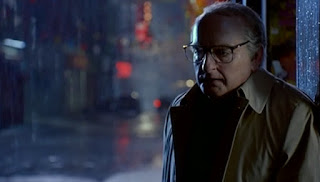 The role: Long-suffering brother and manager of comedian Buddy Love.

Brotherly chemistry with Billy Crystal, which is important. Delivers the hell out of the line "You could have been nicer." Ages more comfortably than his co-stars. A very good, very sad performance. Don't think it benefits from the time-jumping structure of the movie, though you do get to see the consistency of his arc, however it may be presented.

So, does inevitable mean deserved? In this case...yes. My vote goes to: