The five films nominated for the 1992 Academy Award for Best Picture are:

Weird little movie, shouldn't work. It does. Wonderfully. It's frank and surprising without ever feeling exploitative or forced. Sexy and romantic without being lurid. Manages to make that transition from IRA to GAY without seeming like two disparate ideas Frankenstein'd into one screenplay. Truly, a pleasure to watch!

Hokum, the lot of it. For every moment that rings true - Nicholson's dismissive sit-down in Cuba, for example - there are hundreds that remind you that this is, after all, mass market pablum. A lot of the ensemble does well, sure: Pollak, Nicholson, Bacon. But Sorkin's too-clever-by-half words ring false coming from Tom Cruise; Moore is pretty good except when she's not; oy, and those defendants, oy! It's just bullshit, bullshit, bullshit.

There's not a single thing about this movie I don't like. The performances are all stellar, the look superb, the music (both the original score and the arrangements of pieces by Percy Grainger) hits all the right emotional moments, the story! Its concerns regarding class are always relevant, but so too are its observations on the limitations of philosophical do-gooderism. No matter which of their films you may prefer, this one truly feels like the apex of what Merchant-Ivory can do.

I've been saying this a lot but: this a very good, very long movie, and only one of those things is completely necessary. An hour too long is an hour too long. And I just don't see how the storyline about boarding school pranks goes with the story of a depressed blind man's last hurrah. As negative as that sounds, I don't regret watching it, nor would I count out watching it again. The Pacino performance alone is worth it.

Haunting movie, and I mean that in a "thinking about it completely changes my mood" way. I love that - movies should do that! Understated but nonetheless effective in its depiction of the mindless menace of violence. Not even comeuppance is satisfying, not when it comes at the tail end of "Deserve's got nothing to do with it," which just forces you to consider everyone's POV on the subject.


No surprise, another five-star film for me. But so was another...and it's my winner. My vote goes to: 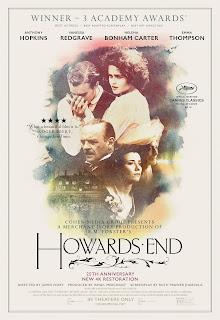 But that's not the end of 1992. Next week: the rest of the nominated films, then a look at 1992 Horror, as recommended by Graham Skipper and Joe Begos on Screen Drafts.