As I mentioned earlier, my journey to the 1975 Retrospective has been a long one -- so long, in fact, that it is not yet completed. I am hoping to hit at least 70 films, and I've still got 38 to go...including four Academy Award nominees.

Anyway, as I say, it's been a long journey. My last post in the Retrospective Series was in August of last year. Since then, I've been working, trying to write, reading, moving...and of course keeping up with current cinema. Besides, it's difficult to reach back into the past and just watch the movies of the time. With the films of 1974, it was no problem. With 1964, I missed one or two, but resources were readily available. 1975, however, is a different beast. Considered by critics of the time as one of the worst years in American Cinema, you will find many of the Oscar nominees difficult to obtain. You can buy Hester Street, with Best Actress nominee Carol Kane, on Amazon...if you're willing to spend 90 dollars for a used DVD. Original Song nominee Whiffs is also available for purchase...if you still possess a VHS player (I don't). And Score nominee Birds Do It, Bees Do It isn't available anywhere, hasn't been seen since HBO showings in the late 80s. I'm still trying to find Hester Street, but you will find more gaps than usual in my profiles.*

In addition, of the films I have seen so far...the critics were right. I don't think it's the nadir, per se, but I find myself shrugging more often than hugging. Often I see performances or technical achievements that succeed in spite of the film. Often I'm just plain bored. I see more and more that the Academy Award Nominees may, indeed, represent the best that year had to offer, and sometimes even that isn't saying much (I'm looking at you, Lies My Father Told Me). One always hopes that you'll find several undiscovered or underrated gems, as with my Best Picture winners Bring Me the Head of Alfredo Garcia or The World of Henry Orient. I'm not saying I haven't completely fallen in love with works previously unknown to me, but I do wish there were a few more.

Yet, despite the fact that these very same experiences -- limited means, disappointing films, etc. -- resulted in my backing off other years, I had to complete 1975. And there are three reasons for this.

1) The Best Picture lineup in one of the best in history. Five classics, all different genres, all directors working at the top of their game.

2) Brenda Vaccaro was nominated for a Jacqueline Susann movie. This I had to see.

3) I had already completed one category.

Of course, that last one is the most important, and ties into the first. I had seen Jaws, Nashville and One Flew Over the Cuckoo's Nest multiple times, and having never seen Dog Day Afternoon since high school, I was eager to revisit it. But what pushed me was the absence of certain films from my theater. The multiplex I work at didn't get to book The Avengers or Dark Shadows, the back-to-back headliners of Summer's beginning. To make up for the fact, we screened a mini-festival in the historic Cinerama Dome: Gone with the Wind, The Shining, Ben-Hur, and many more! And one of these was a little film I'd never seen before, always wanted to see, and was going to get to see on the big screen.

And why not start where the project did? Ladies and gentlemen, the nominee for Best Picture, illustrated (as always) with my favorite scenes: 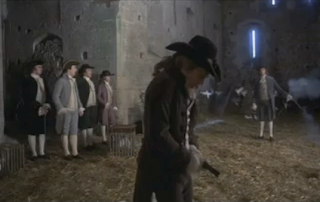 The last nominee I saw, and the one that started this journey. Barry Lyndon is the tale of a common Irishman who manipulates his way up the social ladder in Georgian England. Of course, as this is a Kubrick film, it's boasts exquisite detail in the design, gorgeous cinematography, black humor, and memorable characters. At a little over three hours, it is never dull, constantly surprising us with Barry's progress through the classes, from an impoverished nephew to soldier to spy to professional gambler to Lord of the Manor. Ryan O'Neal is a surprising yet effective choice for the lead role, his vapid beauty a convincing visage for the somewhat dim dreamer. This is in addition, of course, to the great performances coaxed by bit players Murray Melvin, Marie Kean, Frank Middlemass and Dominic Savage, all proud members of the Kubrick Scene-Stealers Club.

It's a fascinating study of the class system, one in which a title may be purchased of a man who has gambled and cheated his way to the top. One cannot fully condemn Barry, either; his lack of social standing costs him his youthful sweetheart. You're either in that 1% or you're nothing. A timeless conflict, obviously. 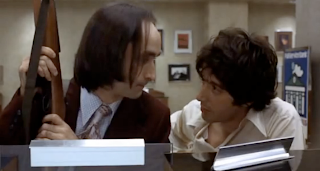 The first of our three sweaty summer movies on this category. A bank robbery goes awry and becomes a media circus, with hostages that are enjoying themselves, protests supporting the robbers, and a secret marriage that is not what anyone expects. It's also a film boasting one of the greatest performances of Al Pacino's career, supported by an ensemble made up of vivid, serio-comic characters. The pizza delivery guy leaps into the air triumphantly, exclaiming pride and pleasure in his fifteen seconds of television fame. The wife of lead robber Sonny never shuts up, monologue-ing about her fears and disappointments. One of the tellers even refuses to go back with the cops when she can, instead insisting on sticking with her girls as she waves to the crowd...and cameras.

For that's what the movie is all about: the media and the ways in which it can be used and abused. Though there to cover a hostage crisis, the news cameras instead record a triumphant Sonny as he orders around the cops, tosses money to the crowd, and entertains his hostages. The dim-witted thieves become symbols of gay oppression and police brutality, even though only one of them is gay and the only physical violence comes at the hands of one hostage's hot-headed boyfriend. One of the final scenes has a car driving Sonny and Sal through the crowd outside the bank, and they meet with both cheers and jeers: an audience watching a sporting event. Humorous, a little cynical, yet always human.

Required viewing every year. Jaws is, of course, the first summer blockbuster, which broke box office records and made the career of young director Steven Spielberg. It's so integrated into the popular consciousness that one could probably quote most of the film without having ever seen it: "You're gonna need a bigger boat" "duhn-duhn-duhn-duhn-duhn-duhn-duhn-duhn" "Smile you son of a bitch" and so on. It's known as one of the scariest films of all time, and as one of the films that killed the auteur fad of the 1970s. People call it a timeless masterpiece, others dated and overrated. A film as big as Jaws is going to have a lot of equally rabid supporters and detractors, but most people rarely take the time to sit down and watch the film beginning to end. No need to, right? Everyone knows it.

When you do, though, you realize how solid a film Jaws really is. The chemistry between the main trio, the tight editing, John Williams' score building menacingly; certainly that's all wonderful, but what we've forgotten over time is the way this film charts the arc of Roy Scheider's Brody. A city cop who moves to Amity Island to get away from urban squalor, Brody fears the water, feet never touching the beachside flotsam, yet finds himself in the middle of the ocean against a calculating man-eater. He becomes almost an observer in the latter half of the film, out of his element, ceding authority to Quint, yet it is he who must ultimately step up and defeat the shark. Then swim back to the mainland. He reminds me of my dad: devoted to his family, sensible, willing to do what it takes for those he loves. I can identify with Jaws.

Besides, it's still really fucking scary.

Regular readers of this blog or my Twitter, or indeed any casual peruser of my profile, knows how I feel about Nashville. It's Altman's masterpiece, not just the first of his kaleidoscopic ensemble films, but the most successful at capturing the spontaneous highs and lows of all classes, races and ages. You GET the behavioral whys and wherefores of characters as diverse as ex-con Wade and superstar Haven Hamilton, punctuated in every scene by musical performances ranging from the emotional to the absurd.

Its fashion, politics, anticipation of the Bicentennial and casting of Michael Murphy in a lead role may date it, but its appeal ranges from my ex's dad to myself. We recognize ourselves in the characters, and not always the most savory ones. Maybe, like Sueleen Gay, we think we're the next big star, convinced that the reason nothing's happened for us has more to do with timing than talent (sometimes true, but sometimes we shouldn't kid ourselves). Maybe, like Mr. Green, we're too passive and accommodating in our relationships with people, no matter how little respect they pay us. Maybe, like the Hal Phillip Walker campaign girls, we're putting all our hopes and dreams for the future in a politician who seems too good to be good. Whoever you are, you'll find yourself in Nashville (and among 24 of your favorite stars!). 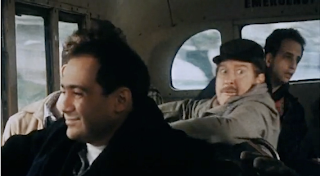 One Flew Over the Cuckoo's Nest
***

The legend itself. Winner of five Academy Awards, listed on both of AFI's Top 100 Movies, referenced in everything from Daria to It's Kind of a Funny Story. Schools teach it, doctors have gone into the mental health profession because of it, people constantly argue the merits of it. Cuckoo's Nest has a reputation for a reason: it's a solidly put-together, at times inspiring story of a rebel fighting against the system and the cold-hearted, power-mad authority figures who try to bring him down. Great performances from Jack Nicholson and Louise Fletcher as the two forces fighting for the souls of the mental patients, and of course from the patients themselves: future stars Christopher Lloyd and Danny DeVito, third-billed William Redfield, Academy Award nominee Brad Dourif, and more!

I do feel, sometimes, that the film simplifies the conflict, unmistakably rooting for its "counter-culture" hero while only barely acknowledging the fact that he's a manipulative crook with no understanding of the very real problems his fellow inmates face. Nurse Ratched is too easily villainized as this unfeeling woman, without any acknowledgment of the necessities in running a mental ward. Still, I have to give credit to the actors for attempting to bring a shadow of this conflict into better focus. And really, one starts to forget that when faced with the inspiring fantasy World Series, triumphant fishing trip and quietly cathartic Christmas party. It's honestly moving, anchored by Nicholson's authentic performance -- my dad always cites the split-second moment in the basketball game when McMurphy wipes his snot as one of the greatest genuine moments in film.

One Flew Over the Cuckoo's Nest won in a grand sweep, the first film since It Happened One Night to win both Lead Acting categories, Screenplay, Director and Picture. Awesome. But I started with Best Picture because it's the least suspenseful of my profiles. Those of you who know me, read me, tweet me, y'all know that I have to back my favorite movie of all time:

NASHVILLE
i never get enough

*I mean, I missed Margin Call, A Separation and A Better Life last year; it happens

**Spoiler for both films, but this double feature had the surprising theme of Social Schemers and the Horses Who Hate Their Kids
Posted by Walter L. Hollmann at 3:08 PM