The Living Against the Dead: Adapted Score, 1975

The now-defunct Adapted Score category has slowly become one my favorite categories, and a large part of why I enjoy these retrospectives so much. There was a time when, instead of lifting previously-lifted works in their original form, composers would actually arrange new versions that fit the world of the film. As with Animated Feature, the participants were so few that some of the nominees raise a few eyebrows, but the overall run from 1938 to 1984, including that period in the 40s and 50s when it was under Scoring: Musical, boasts some worthy and unique choices. It's why we can call Willy Wonka & the Chocolate Factory a nominated film, and Prince an Oscar Winner. You wouldn't trade that, would you?

Unfortunately, the category no longer exists, ending the year Terry Gilliam's Brazil was released, making it and Babe the worthiest winners who could never be. There has been some talk among the bloggers and tweeters about reviving the category, but most films using non-original music go the Tarantino route of dropping previous recordings in. And that's fine; if you're not gonna do it right, don't do it at all. But there's something to be said for a category that pits Broadway vets, rock musicians and dead classical composers against each other.

The nominees for Best Adapted Score are:

It's impossible to think of this film without hearing Handel's Sarabande, originally written for harpsichord, used throughout the film in many different ways. Whether it's romantic strings for the love scenes or the predominately percussion one for the duel, Rosenman's various arrangements give a different meaning to the same piece of music, a miraculous achievement.

I find Funny Lady to be only half-heartedly a musical, as most of the songs are performed within the revues Fanny stars in, with the three real musical numbers feeling more intrusive than productive. The incidental music adapted from the songs of both Billy Rose and Kander & Ebb certainly doesn't help matters, laying things on a bit thick during quieter scenes, dropping out during louder ones. Not the most memorable of song scores, either. Pity.

The Who's new arrangement of their rock-opera is a wee more out there than the original concept album. Take the Christmas segment: while the original tune has a less ostentatious rock arrangement, the film first establishes a more Christmassy sound, with children's choir and all, before becoming a cacophonous mix of toy trumpets and noisemakers. I don't even know what that noise is at 2:46. I do know, however, that it's effective in continuing the discomfiting, camp circus that comes with a 1975 Ken Russell film (see also: Mahler's conversion sequence; literally anything from Lisztomania*).

No contest. Oscar and I see eye-to-see and give the gold to.... 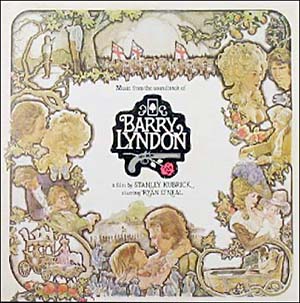 ROSENMAN
for
BARRY LYNDON
Posted by Walter L. Hollmann at 6:59 AM