The Immortals and The Missing: Original Score, 1975


Gerald Fried for Birds Do It, Bees Do It
ABSTAIN

I will never understand how an Academy Award-nominated film can go unreleased in any home viewing format. It boggles the mind, and reduces the film to a footnote.

Alex North for Bite the Bullet
***

This year was full of hat-tips to genres past, and North's Classic Western score is no exception. Shades of Aaron Copland in this perfectly fine, solid piece of work. It doesn't distinguish itself as much as the other nominees, but it's not to be sniffed at.

Instantly iconic. Everyone knows what you mean when you go "duhn duhn duhn duhn, etc." But we shouldn't forget the more adventurous music played for the Orca, music that calls back another era of filmmaking and turns the men's trip into a high-seas adventure...before returning to the relentless repetition of those damning strings.

Jack Nitzche for One Flew Over the Cuckoo's Nest
****

Its Native American influence hints at the novel's origins, as it provides the connection between Chief Bromden and Randle McMurphy. A simple tune, it's calming at the beginning, triumphant near the end, and haunting well afterward.

Jerry Goldsmith for The Wind and the Lion
****

Where Milius fails, Goldsmith succeeds. Exciting and exotic, the score provides the adventure, romance and depth lacking elsewhere in the film. Paves the way for future adventure scores from Raiders of the Lost Ark to the remake of The Mummy. The kind of music that gets your blood pumping and turns the most mundane of tasks into a mission.

I have to admit, Oscar usually does me proud in this category, and I'm going with its proclamation that the Award for Best Original Score belongs to: 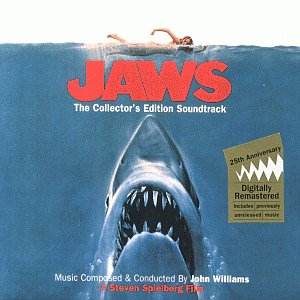 WILLIAMS
for
JAWS
stay out of the water
Posted by Walter L. Hollmann at 6:09 PM

Email ThisBlogThis!Share to TwitterShare to FacebookShare to Pinterest
Labels: 1975, Alex North, Birds Do It Bees Do It, Bite the Bullet, Jack Nitzche, Jaws, Jerry Goldsmith, John Williams, One Flew Over the Cuckoo's Nest, Oscars, The Wind and the Lion