Though I pride myself on being a reader, I'm reminded of how little I know, how little I've read, every time I look at the nominees for Best Adapted Screenplay. And what's fascinating about this lineup is how many options each nominee offers!

For instance, Breaker Morant. The true story of three Australian lieutenants in the Boer War, courtmartialed for executing prisoners - and murdering a civilian. The film itself is mainly adapted from a hit 1978 stage play by Kenneth G. Ross, but also tips a hat to the non-fiction book The Breaker by Kit Denton - even though Ross and the production had just won a lawsuit against Denton for claiming to be the film's source. Why two credits, then? Girl, I don't know.

The Elephant Man, another true story, is likewise adapted from multiple sources. Following the true story of famously deformed Victorian personality Joseph "John" Merrick, the film's main inspiration is the memoir by Merrick's physician, Dr. Frederick Treves - yet it also takes from the anthropologist Ashley Montagu, the man appointed by UNESCO to investigate The Race Question. It bears no relation to the stage play of the same name, which was contemporaneously running on Broadway, a fact that stuck in the craw of the show's producers.

Ordinary People is straightforward, based as it is on Judith Guest's debut novel about a family dealing with the aftermath the death of one son and attempted suicide of the other. No confusion there, especially as it became a critically-acclaimed bestseller. But I do want to point out: it was later adapted into a stage play by Nancy Gilsenan. Mind, that was after the film won its Oscars - including this one.


Coal Miner's Daughter comes from the same-titled autobiography by Loretta Lynn (co-authored with George Vecsey), following the life and sometimes tribulations of the First Lady of Country Music. Loretta remained very hands-on, hand-picking Sissy Spacek to play her - and it doesn't end there! Last year, it was announced that Coal Miner's Daughter was heading to Broadway, and once again Ms. Lynn picked the new her: Zooey Deschanel.

The Stunt Man is the only nominee to stay away from the stage - for now. Based on Paul Brodeur's novel, the film follows a fugitive who hides out on a movie set, only to discover the director may be a greater threat to his physical and mental well-being than any cop. Don't expect to see this on 42nd Street any time soon - the flick is pure cinema.

And do those screenplays do their sources justice? Read on...

I love me a courtroom drama, especially one dealing with the gray areas that this one does. What is a crime in wartime? Who determines when a commanding officer has gone too far? What will a government do to excuse its own actions? A thrilling bit of history that proves disquietingly timeless.

Makes real people out of superstars - there's a humility to the story-telling, to the people, without condescension towards stardom or, for lack of a better word, simplicity. There is an occasional vagueness regarding timelines and Loretta's level of stardom, but there's only so much time...

Does it overstate the similarity between Treves and Bytes, saying it after we've already seen and understood the connection? Oh gosh, yes, but it's so moving and understated when it does confront the issue that we forgive it. In such intimate moments does the film distinguish itself - the big moments are soul to soul. 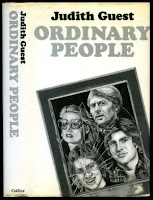 The Stunt Man
Lawrence B. Marcus, adaptation by Richard Rush
adapted from the novel by Paul Brodeur
***

There's a lot going on, and not all of it works, but the movie's whole premise is reliant on mindfucks and a wicked sense of humor. Perhaps that's why we can excuse some of its narrative clumsiness - the dropped subplots, the long tangents that lead nowhere. It's nonsense, but it's getting away with murder because it has a speech outlining why it's nonsense.

The Oscar went to Ordinary People, but my dears, my loves, I surprise myself by awarding my vote to a film that got little love elsewhere - so here's to...

Tomorrow, we take a listen to the films nominated for Best Original Song: The Competition, Fame, Honeysuckle Rose, Nine to Five. What fun it will be!