The moment has come - I present to you, the Best Picture nominees of 1980:


Coal Miner's Daughter
***
A conventional biopic - rise, semi-fall, recovery, immortality - though well-written and -acted enough that we forgive the familiarities. Sissy Spacek deserved her Oscar, but most notable, to me: the design! I'm talking the sets, costumes, sound, the hair! Detailed and authentic. Entertaining overall.

The rest of the lineup after the jump....


The Elephant Man
****
Unexpected, at times invoking the tone and style of the old Universal Monster films but turning them on their head - the "monster" is the hero, the "mad scientist" is benign, the "children in danger" are assholes. Balances the eerie with the heartfelt, remains respectful without feeling like it's pulling punches. Overall, a beautiful treasure.


Ordinary People
****
A respectful, gutting study of grief and the ways people handle it - and each other. Empathetic while acknowledging that not everyone can be saved from themselves, whether the results be suicide or an emotional distancing. Fine performances, but I don't think it gets enough credit for its simple yet effective cinematography, or for its appropriately jarring editing. Redford's a master.


Raging Bull
*****
Not so conventional biopic - the rise is scrappier than most, the fall is inevitable, the recovery is not that at all, and forget immortality, this man looks like he's ready to punch the clock. All I know is I felt truly alive while watching. The boxing sequences are thrilling, gladiatorial; the domestic scenes, queasy, dangerous. The black-and-white cinematography only amplifies the ugly. It's no tragedy, it's no inspiring true story - it's a human comedy.


Tess
**
The movie reminds me of its title character: beautiful, a feast for the eyes on every level. And beyond that? Boring! I love long movies - I loooooove long movies - but there's nothing of substance that justifies its three-hour runtime. Yet I dare not completely write it off: the score, the cinematography, the production design...


But oh, goodness, my personal vote makes it a sweep in all eligible categories for... 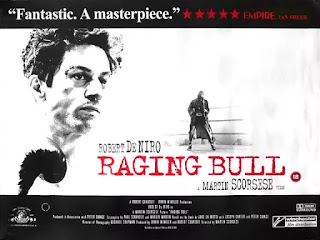 A masterpiece...but beware, because soon I may tarnish its memory. Or make things interesting? All next week, I'm recasting these five Best Picture nominees, just for fun! We'll see if you agree, starting with Coal Miner's Daughter on Monday....