Very late, but family was in town, so I have no regrets. Besides, why not start the week with five legendary leading men?


Let's get into them, after the jump. 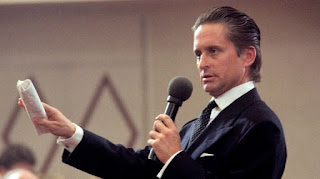 From The Wall Street Journal: "But the performance medal has to go to Douglas...he charms, disarms and disdains with equal ease"

My Take: Douglas makes clear that Gekko relishes his role as the Devil - it's in the actor's own relishing of Gekko, not just a man who loves the sound of his own voice, but the fact that people stop to listen to what he has to say. An unmistakable electricity whenever he comes on screen. As dominant as he is, though...isn't this a supporting role? 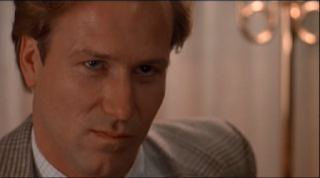 The Role: Tom Grunick, local anchorman moving on up to the Washington Bureau - if only he had more to offer than his camera-friendly looks.

From The New York Times: "Smashing star performances...Mr. Hurt, a most complicated actor, is terrific as a comparatively simple man"

My Take: Earnest, lovable, dumb like a fox. Hurt never judges Tom, embodying the role as fully and honestly as possible, equal parts beauty, certainty, self-doubt...and surprising wiliness. And when he gets to showcase his physicality in scenes like the afterglow with Lois Chiles or orgasmically whipping Holly Hunter's chair back and forth, he brings out a sexy playfulness. 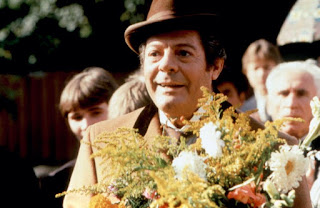 The Role: Romano, an Italian man haunted by the memory of a beautiful Russian lady.

From The Los Angeles Times: "Mastroianni's performance is so beautifully faceted--he is by turns foolish, resigned, bemused, enraptured and even mock-heroic"

My Take: I didn't see this movie! I could have ordered the VHS off Amazon for $90, but...no. That's not happening. Not streaming, not available on iTunes, not at Amoeba. No idea where it can be seen. 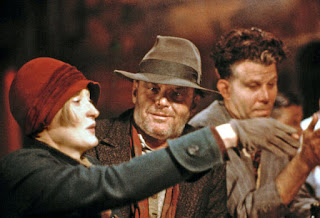 The Role: Francis Phelan, an alcoholic, homeless drifter back in his hometown in time for Thanksgiving.

From Time Out: "At last, a real part for Nicholson to sink his teeth into...the star drives for the marrow, for the spiritual dimension beyond the stubble and staggers"

My Take: Given the temptations to go wild - hallucinations, graveside confessional, drunkenness, upstate NY accent - Nicholson is surprisingly understated here. A heavy performance, to be sure, so that even a decision that in most movies would be a huge character turn instead is a reminder of the walls he has built around himself. A shockingly effective portrayal of hopelessness. 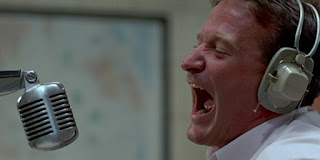 The Role: Adrian Cronauer, disc jockey for the US Armed Forces radio.

From United Press International: "[Williams is] inventive and ingenious...he has a field day with this character"

My Take: Basically a showcase for Williams' improv comedy skills, allowing him to riff "hilariously" any time he enters a radio booth or English classroom. Every now and then he gets some pathos to perform - this is the Vietnam War, after all - but he's playing an underwritten character in an already-thin script, doing little to elevate the material. A headscratcher of a nod.

Not to be super predictable - I think I mentioned in 1986 that he's my favorite actor - but based on both performance and actual screentime, I genuinely believe that of the nominees I saw, the award for Best Actor should have gone to.... 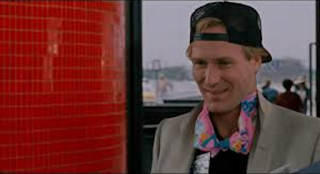