There are two kinds of movies usually guaranteed a spot in this category: historical epics, and anything scored by John Williams. For the former, the obvious representatives are The Last Emperor, the almost three-hour bio of the last representative of empirical rule in China, Pu Yi, and Empire of the Sun, Steven Spielberg's three-hour narrative of a young English boy's experiences in a Japanese POW camp in China; for the latter, look no further than the sexy supernatural fantasy-comedy The Witches of Eastwick...and also Empire of the Sun. Double-dipping! We may be tempted to include Cry Freedom in the historical epic category, but good Lord, no. Which just leaves The Untouchables, a 1920s-set gangster thriller, scored by the legendary Ennio Morricone.


I find Cong Su's remarks, as translated by David Byrne, about wishing for more interest in the arts of China especially poignant, given that, as the only Chinese composer on the film, his work is relegated to but one track - "Lunch" between Peter O'Toole's Reginald Johnston and Wu Tao's young Pu Yi.

Anyway. Let's listen to the music, shall we? After the jump....

From best I can tell, this is, similar to the collaboration of Gandhi, Fenton handling more "traditional" scoring and general arrangements while Gwangwa provides the patina of authenticity. Ok!

Empire of the Sun
John Williams
****

You know he can do wonder like no one else can. Those moments when he really nails Jim's naive optimism, as in the excitement of the planes, or when he thinks he can save a life, are breathtaking.

One for each of the composers here. Kudos to them all for creating a fluid sound for this epic. Sakamoto's my favorite.

Cheeky and thrilling. Morricone knows how to have fun.

The Witches of Eastwick
John Williams
**

An off-kilter score for a witchy, weird movie.

A tough decision, one of the hardest to make so far. Do I side with Oscar's chosen winners or Morricone? I love both so, so, so much. But in the end, my vote goes to..... 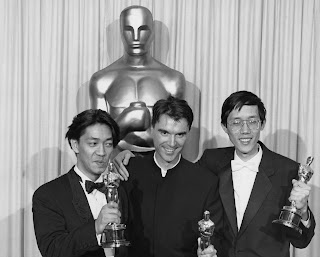